To my eyes as a child of the ’80s, the most modern-looking vehicle on American roadways during my teen years was the Chrysler LeBaron. Particularly in convertible form, Chrysler’s long-running LeBaron went from looking like the box it came in to looking like something that was designed to slip through the wind. I wanted one badly, in 90s-appropriate monochrome, of course.

We already covered the second-generation LeBaron in a previous Used Vehicle Spotlight, so this time we’ll train our focus on the aerodynamic third-generation model.

Why the Chrysler LeBaron?

The LeBaron is always going to be a classic for those of us who grew up in the ’80s and ’90s, but the third-generation LeBaron was also a legitimate performance car. It wasn’t meant to compete with Mustangs

and Camaros, but its range of turbocharged four-cylinder engines packed a punch for the era, and when paired with the available five-speed manual transmission, the sporty little car was pretty fun to drive.

— through to this third-generation LeBaron’s run from 1987-1995, no automaker sold more convertibles than Chrysler. That bit of notoriety may not make it an instant classic, but it may at least add some credibility to its future status as an interesting entry at your local car show.

Which Chrysler LeBaron to choose?

Chrysler made a few changes to the third-gen LeBaron over the course of its production run. The 1987-1989 models had a blockish interior; we prefer the more modern version that hit the market in 1990 since it better matches the sweeping exterior style. For ’93, Chrysler got rid of the hidden headlamps and replaced them with narrower units. Both look pretty good, but the hidden lights appeal to us as a remnant of the era. So, if we were doing the shopping, we’d look for a 1990-1992 model. 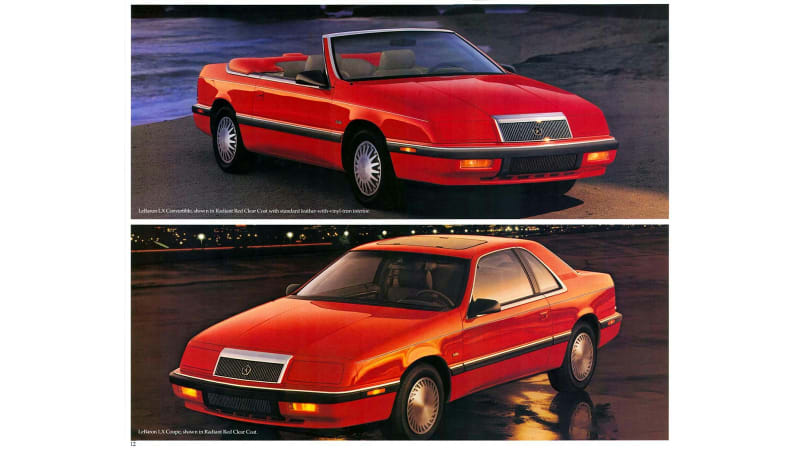 We’d also recommend one of the turbocharged four-cylinder engines instead of the Mitsubishi-supplied V6. The turbo not only feels more era-appropriate, it’s also more fun to drive. Chrysler’s well-known 2.2-liter turbocharged engine family featured heavily in the LeBaron, with the best versions featuring an intercooler and offering up to 174 horsepower and 210 pound-feet of torque. A 2.5-liter turbo-four was also offered with 152 horses and 211 lb-ft.

Our used vehicle listings can be helpful to find a good deal near you. Narrow the offerings down by a radius around your ZIP code, and pay attention to the deal rating on each listing to see how a vehicle compares with others in a similar area.

Read more: All of our previous Used Vehicle Spotlight articles

What else to consider?

If you’re looking for something rad from the ’80s or ’90s, you’re spoiled with good choices. Besides the LeBaron, Chevrolet offered several memorable versions of the Camaro

. The Pontiac Firebird and Trans Am are obvious choices, as is the Fiero. And, of course, the Ford Mustang GT and its 5.0-liter V8 engine is also an icon of the era.

2024 Toyota Tacoma seems to have a rear coil spring suspension