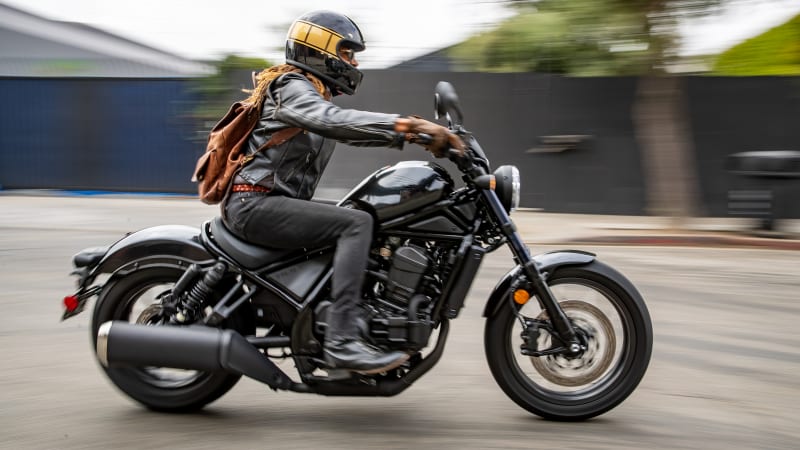 Honda released a bigger, more powerful version of the Rebel 500 that offers riders more than twice the engine displacement. Called Rebel 1100, it diverges from the commonly-accepted definition of a cruiser in several ways.

The 487-pound Rebel 1100 is not the archetypal cruiser because it’s not festooned with chrome trim. It’s offered in Metallic Black and Bordeaux Red Metallic, and Honda painted the frame, the suspension parts, the visible mechanical components (including the chain), the exhaust system, and the handlebars in black. Riders face an all-in-one digital instrument cluster that wouldn’t look entirely out of place in a member of the Mini range.

It also stands out from the pack because it wasn’t developed purely for straight, flat roads. The seat is mounted relatively low at 27.5 inches, engineers managed to tilt the engine at a 35-degree angle to lower the bike’s center of gravity, and they fitted what Honda refers to as performance suspension components. While this cruiser is happy to, well, cruise, it’s not markedly out of its element on a twisty mountain road.

The twin spins the rear wheel via either a six-speed manual transmission or a six-speed dual-clutch automatic linked to handlebar-mounted shift buttons. Riders can select one of four modes called Standard, Sport, Rain, and User, and electronic driving aids like ABS brakes and wheelie control technology come standard.

On sale now, and scheduled to reach showrooms in January 2021, the Honda Rebel 1100 carries a base price of $9,749 including a mandatory $450 destination charge. Selecting the DCT model increases that figure to $10,449. Buyers have several factory accessories to choose from, including visors, seats, racks, and cases.

2021 Chevy Tahoe and Suburban Review | Bigger and better than ever