A small, utilitarian machine like the 2021 Mercedes-AMG GLA 45 is a magnet for car enthusiasts. The boxy, cargo-friendly shape and small footprint of the Mercedes-Benz GLA 250 is appealing enough in its own right, but the GLA 45 takes that formula and adds 250 more horsepower and a trick all-wheel drive system. What’s not to like?

The new GLA rides on Mercedes’ new MFA2 platform (modular front-wheel-drive architecture), which is fundamentally front-wheel drive. This architecture is shared with the new, family-friendly GLB, the A-Class sedan and the CLA “coupe.” Take that CLA, add some ground clearance and a more utilitarian rear cargo area, and you have the GLA.

The basic GLA 250 offers an adequate but not particularly impressive 221 horsepower and standard front-wheel drive. You don’t need to go all the way up to the 45 for an upgrade, though. The Mercedes-AMG GLA 35

That’s underselling it, considering it’s the most powerful production four-cylinder engine currently for sale. The hand-built AMG engine utilizes a twin-scroll turbocharger to maximize low-end response and maximum flow closer to redline, which was increased from 6,500 RPM to 7,200 RPM while the compression ratio was lowered from 10:1 to 9:1 to make room for more boost. 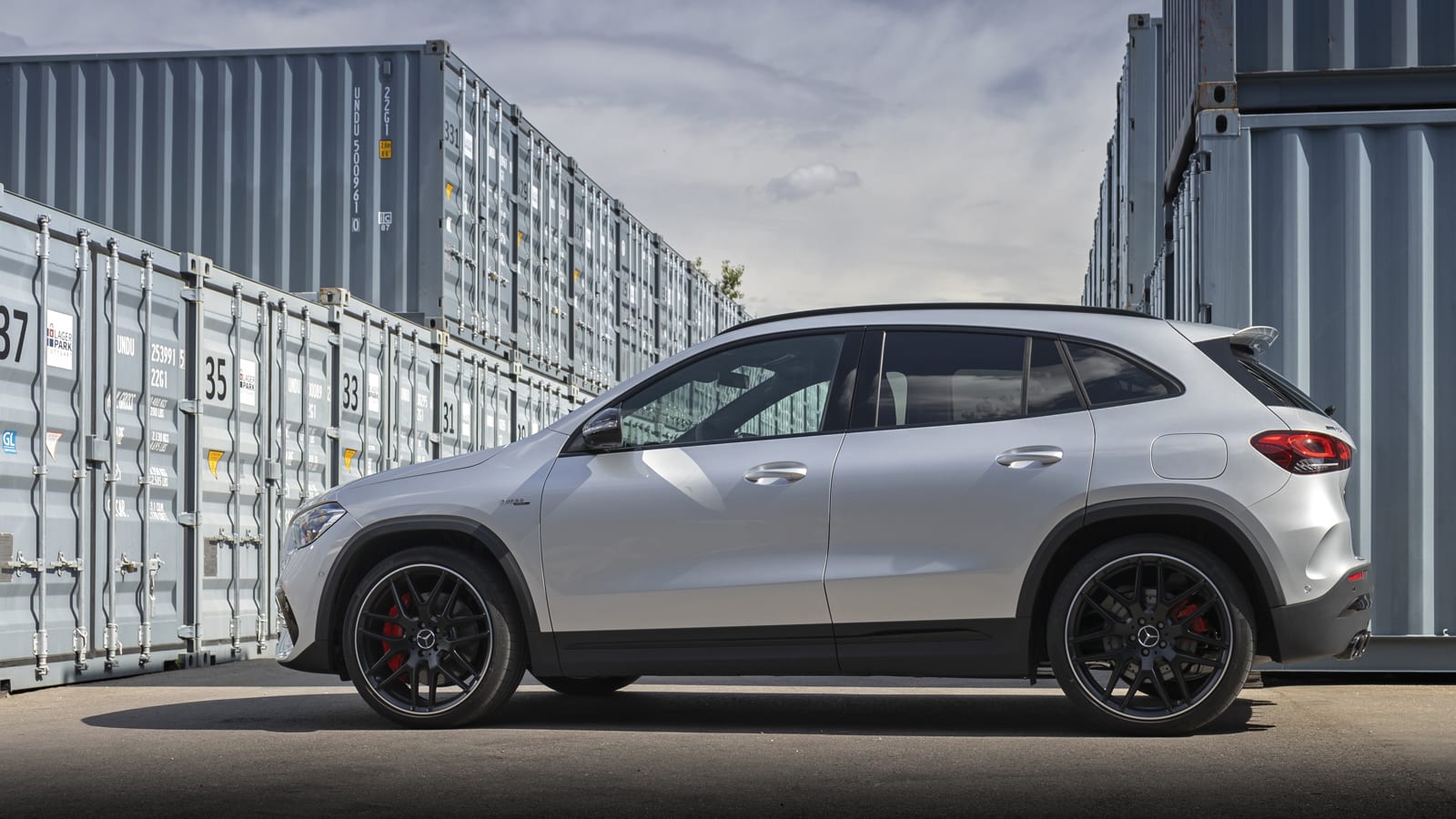 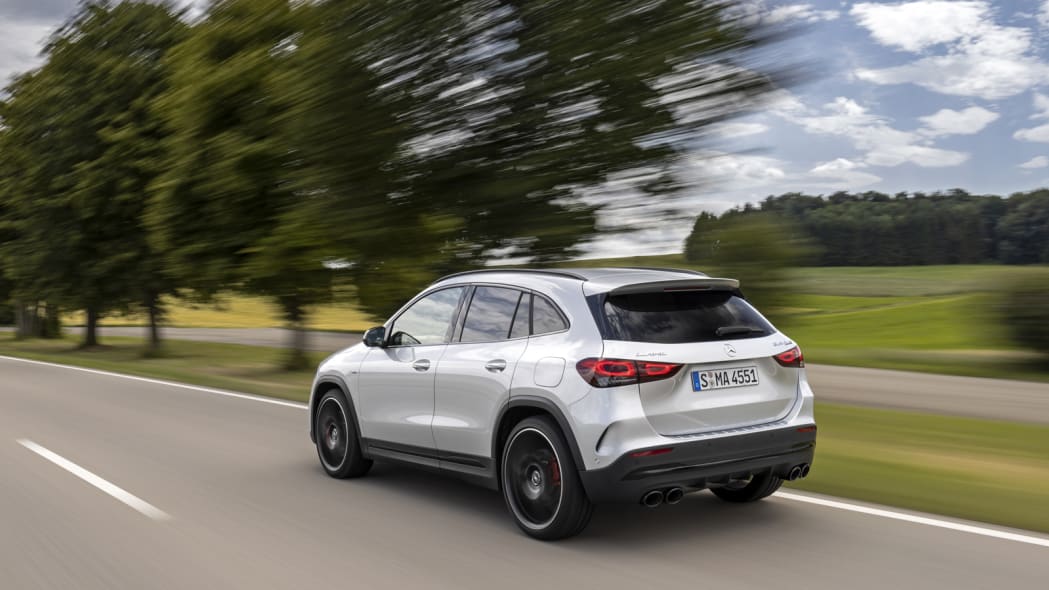 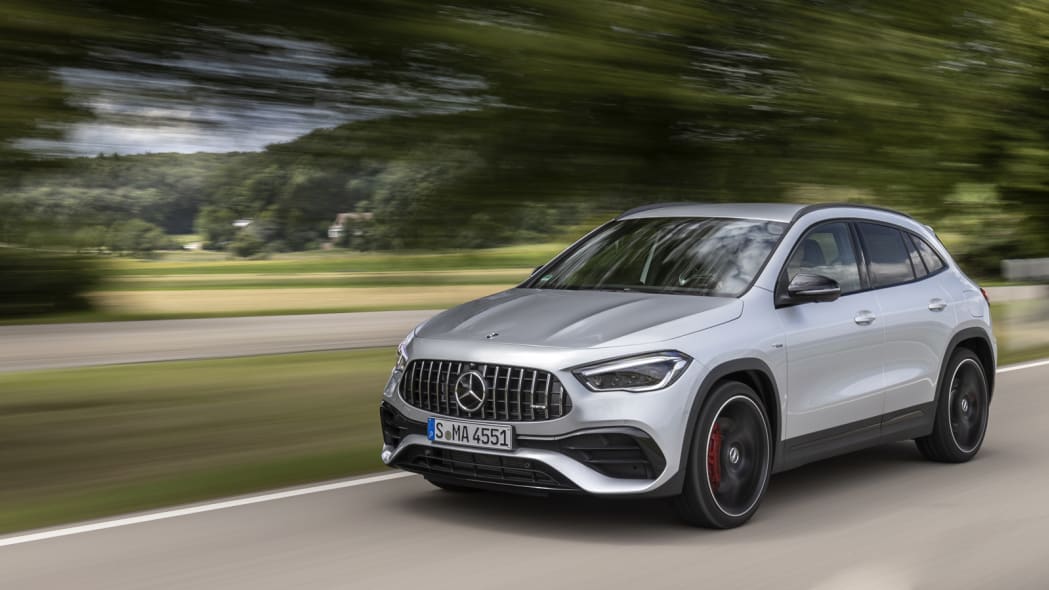 The turbo-four is paired to an eight-speed dual-clutch automated manual and standard torque-vectoring all-wheel-drive system. Like the 35, the GLA 45 sits 7/10ths of an inch lower than the non-AMG models, with just 4.6 inches of ground clearance to the GLA 250’s 5.3.

That’s not very high for something Benz markets as an SUV, but it’s still more than an inch higher off the ground than the CLA 45, and putting it on stilts and trading in

Thanks to its tall stance, those extra pounds are also higher up, which isn’t a good recipe for flat cornering. It’s difficult to describe the sensation of being in what is otherwise a small, buttoned-down sport compact that has been repurposed in this manner, but if you can imagine taking a go-kart and replacing its seat with a bar stool, you can probably wrap your head around what we’re trying to illustrate.

We’re exaggerating for effect here, but the point is that the resulting sensation is a bit incongruous. That’s not to say it’s bad, necessarily; it just requires a bit of mental recalibration. What makes it noteworthy is that it’s absent from Benz’s larger five-door AMG models; the GLC and GLE feel wider and more car-like. 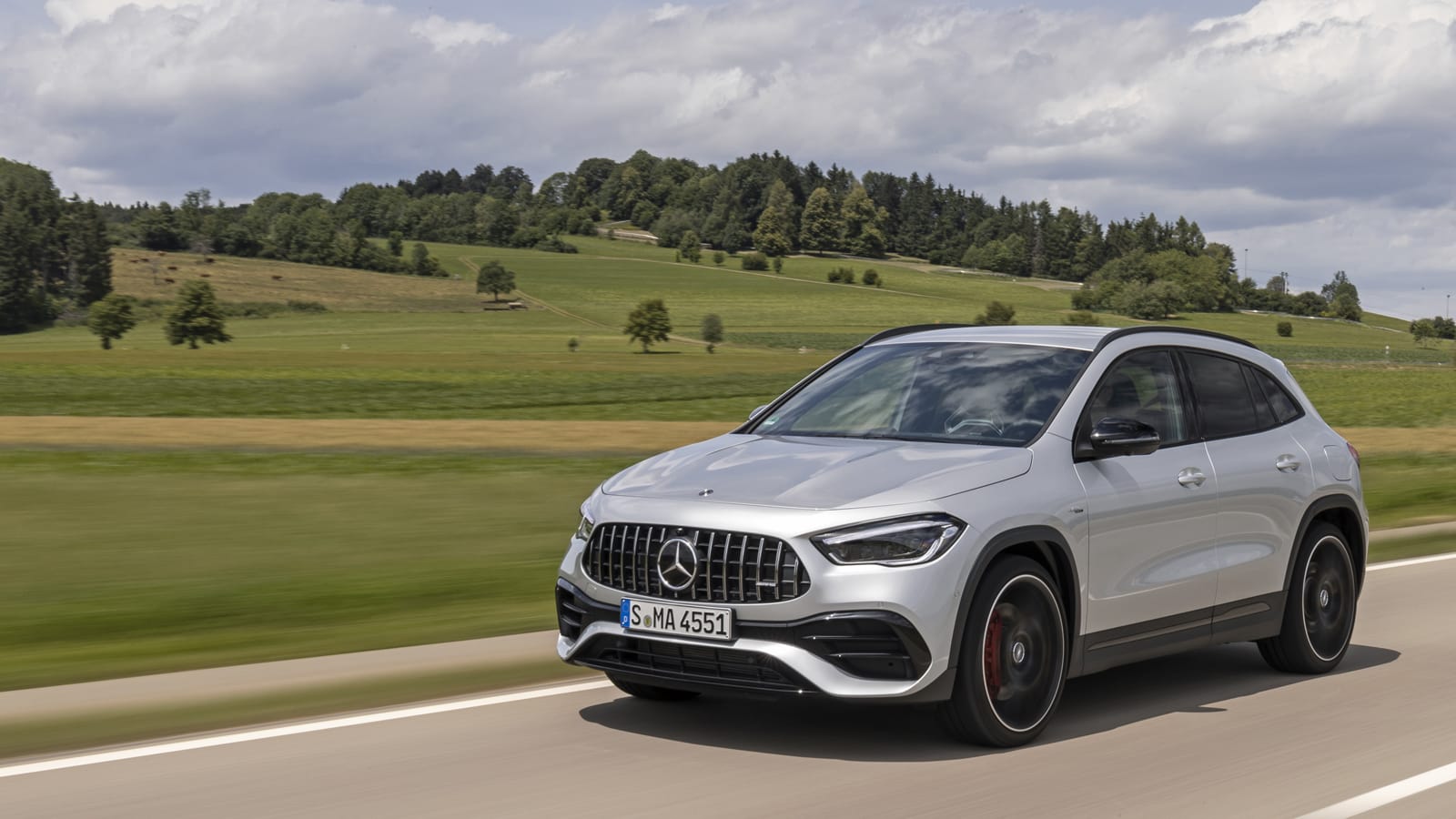 It helps that it’s quick. Tall or not, this little box can boogie. In fact, if you leave it in “Sport,” it’s almost too much for normal driving, which is very on-brand for AMG. This is the tuning shop known for Hammers, after all; nobody’s searching for a 1980s Benz nicknamed the “Scalpel.”

In a straight line, the GLA 45 absolutely rips. Mercedes claims it’ll do 0-60 in 4.3 seconds, and we’d wager it’s even less than that (the GLA 35 is estimated at 5.1 seconds). The little 2.0-liter makes power everywhere, as you’ll quickly learn if you dial in any amount of steering before planting the throttle from a stop. The all-wheel drive will get you sorted in short order, but the tires will object until it does.

At its core, the GLA 45 feels like a high-riding hot hatchback, which is great if that’s what you’re after. As luxury conveyances go, it’s not as much of a lock. In Comfort mode, the GLA 45 is quite pleasant and still handles crisply enough for everyday driving, but on less-than-perfect surfaces (of which there are a multitude in the Detroit area), just about every crack, split or seam in the road surface sends tangible feedback through the GLA 45’s petite frame. Dial it up to Sport and it gets fatiguing fast. It’s tolerable in small doses, to Benz’s credit, because that’s not true of all sport suspensions, but it’s just a bit

much for something wearing a luxury badge. (Note that we found the ride of the similarly sprung GLA 35 to be surprisingly tolerable, but that wore 19-inch wheels instead of our 45 tester’s 20-inch AMG twin-spokes).

Our tester came somewhat sparsely equipped, especially for a Mercedes-Benz – no semi-self-driving suites or other wizardry here, just an old-fashioned cruise control and the basics you need to keep you out of trouble as much as possible. Your author appreciates parsimony when it comes to high-tech driving aids, but unfortunately that restraint extended to some of the items we’d have liked to see, such as the swanky AMG Performance seats. Despite coming far short of loaded, its sticker price was still a healthy $62,150 (including $1,050 for destination). 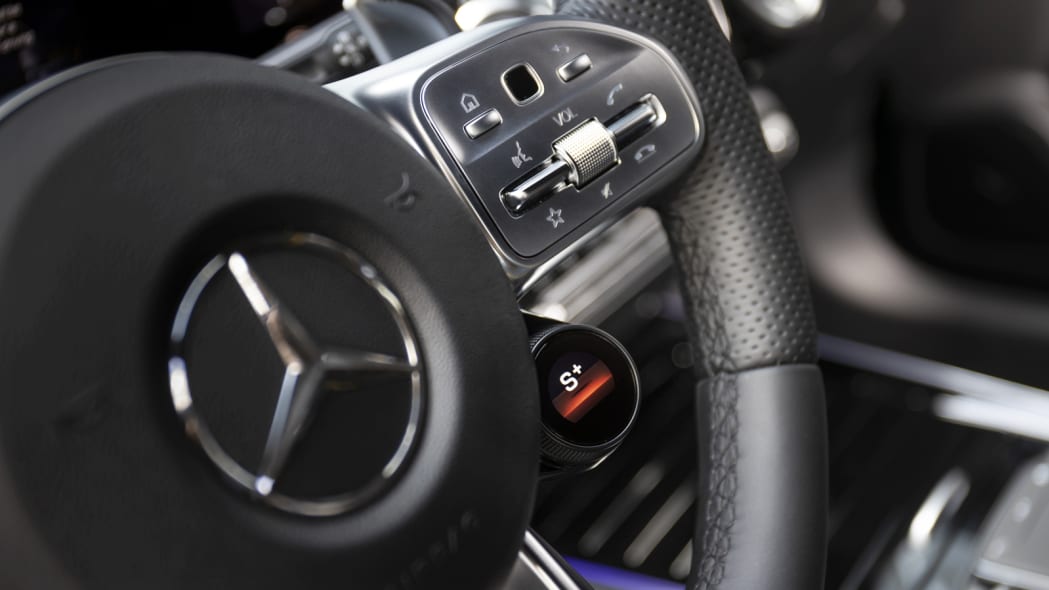 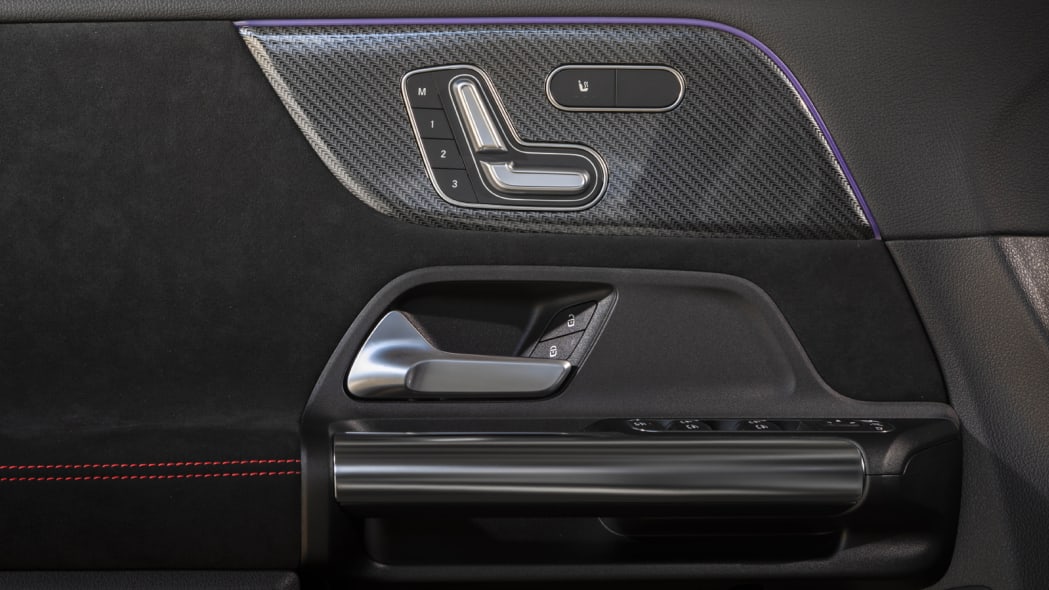 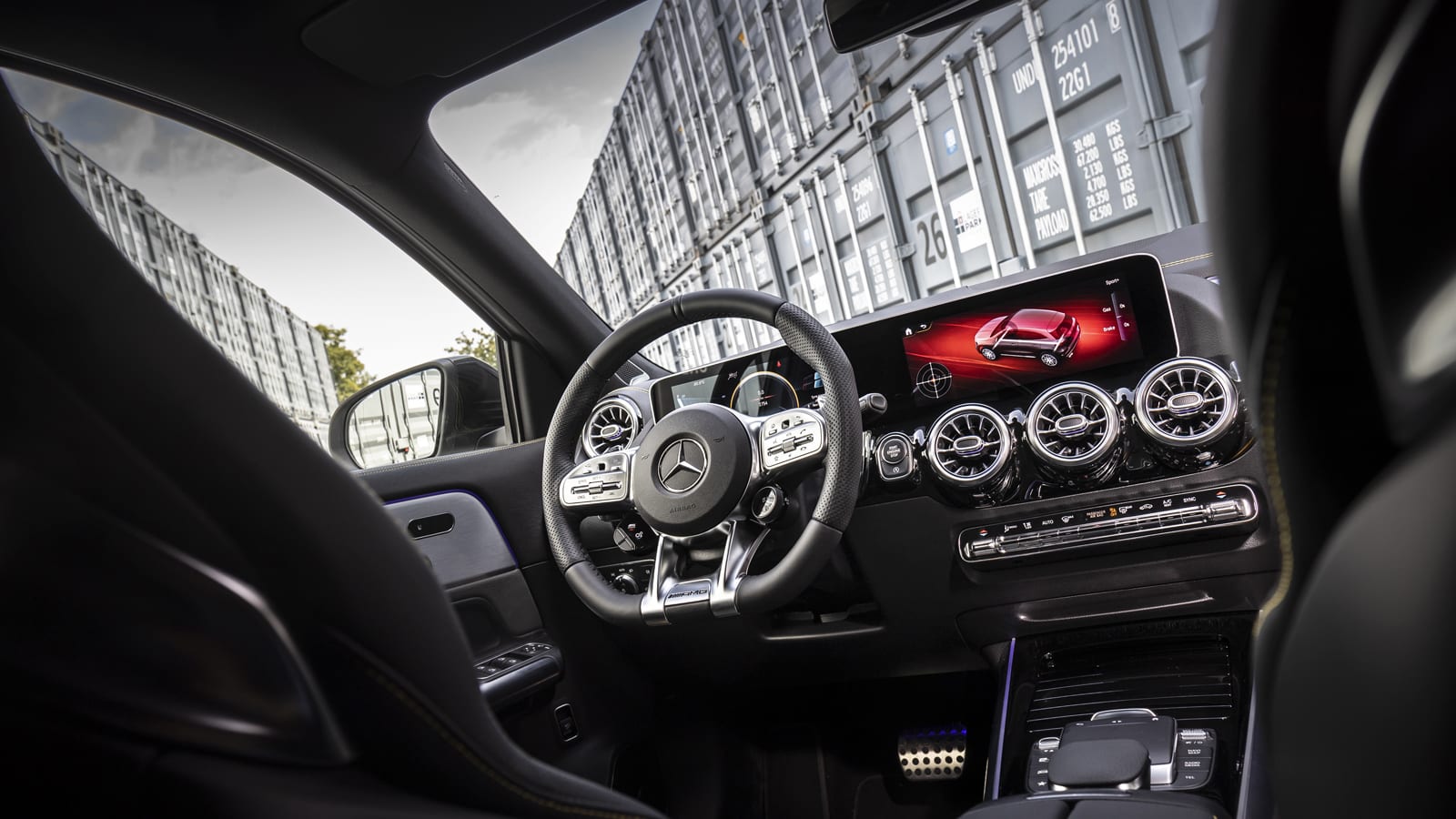 It was a bit plain inside as a result, especially without those Performance seats. Still, as in its other entry-level models, it’s obvious that Mercedes put effort into making the GLA 45’s cabin feel premium despite its relatively lowly position within the broader lineup. You won’t get the ostentation of a C-Class here, much less any of the company’s true flagship offerings, but compared to a BMW X2

M35i, the GLA gives off a more upscale vibe, and naturally the gap widens the more you spend.

A good, all-wheel-drive hot hatchback with German pedigree is easier to find today than it once was, provided you’re willing to play a bit fast and loose with the definition. If you need a fast, inexpensive (context is key here) Mercedes-Benz, by all means, the AMG variants of the CLA and GLA will certainly fit the bill. The GLA 35 costs just a few grand more than a VW Golf R and goes head-to-head with the BMW X2 M35i, and if even if it suffers dynamically compared to those, there’s something to be said for its greater utility and ritzier cabin.

The GLA 45, meanwhile, puts the buyer atop, well, whatever heap this car falls onto. It’s still got the utility and cabin, but the performance leap from 35 to 45 is a costly one – nearly $10,000 for our similarly equipped testers. Go checking boxes willy-nilly and you could be looking at a $75,000 GLA 45. How much is 382 horsepower really worth to you?

Manufacturers have an answer to higher costs: Pass them on