The 2021 Porsche Panamera 4S E-Hybrid Sport Turismo (say that three times fast) is effectively a replacement for the departed Turbo model. Porsche put the 2021 Panamera lineup through a full-scale update, and the Turbo didn’t make it through the wringer. Instead, Porsche added a new Turbo S model, kept the range-topping Turbo S E-Hybrid and introduced this slightly greener alternative to the V8-powered Turbo.

All of the above applies to both the standard sedan body style and the Sport Turismo (wagon), the latter of which we tested for this review. Replacing any Porsche “Turbo” model is a tall task, but the 4S E-Hybrid is starting from a promising place. It combines thrust from both a 2.9-liter twin-turbo V6 and an electric motor. The result is more power than the V8-equipped Turbo it supplants. A total of 552 horsepower and 553 pound-feet of torque is on tap, which is good for a 0–60 mph time of just 3.5 seconds and an 11.9-second quarter-mile. That 0–60 time is equivalent to the 2021 Audi RS 6 Avant

. In practice, the Porsche feels quicker by virtue of its electric smack of torque right off the line. Once underway and at higher speeds, the RS 6 pins your head to the headrest just a little bit harder.

The 4S E-Hybrid, like every other E-Hybrid-branded Porsche, is a plug-in hybrid. Porsche’s whole Panamera E-Hybrid lineup gets a more energy-dense battery pack this year. Capacity increases by 27% to 17.9 kWh, which ups the all-electric EPA-rated driving range to 19 miles from the previous 14 miles. Our range test saw the car travel 23.8 miles in mixed driving upon starting with a 100% charge. Acceleration from its 134-horsepower electric motor is slow for a Porsche, but it’s enough to keep up with traffic in most situations. Maybe not for merging onto the highway under electric power — the car will make it to and past 70 mph, but it takes too long to be comfortable.

Once the all-electric range was depleted, we saw numbers approaching 27 mpg in highway driving. That compares to the EPA’s

estimate of 22 mpg combined. In other words, it was more efficient than expected, which is good considering the old Panamera Turbo managed an EPA-estimated 21 mpg combined. The single-mpg improvement going from the V8 to the V6 hybrid illustrates how vital it is to use the E-Hybrid’s electric range to make driving this car a “greener” option. Never charge it, and the E-Hybrid’s effective mileage isn’t much better than the fire-breathing Turbo’s. 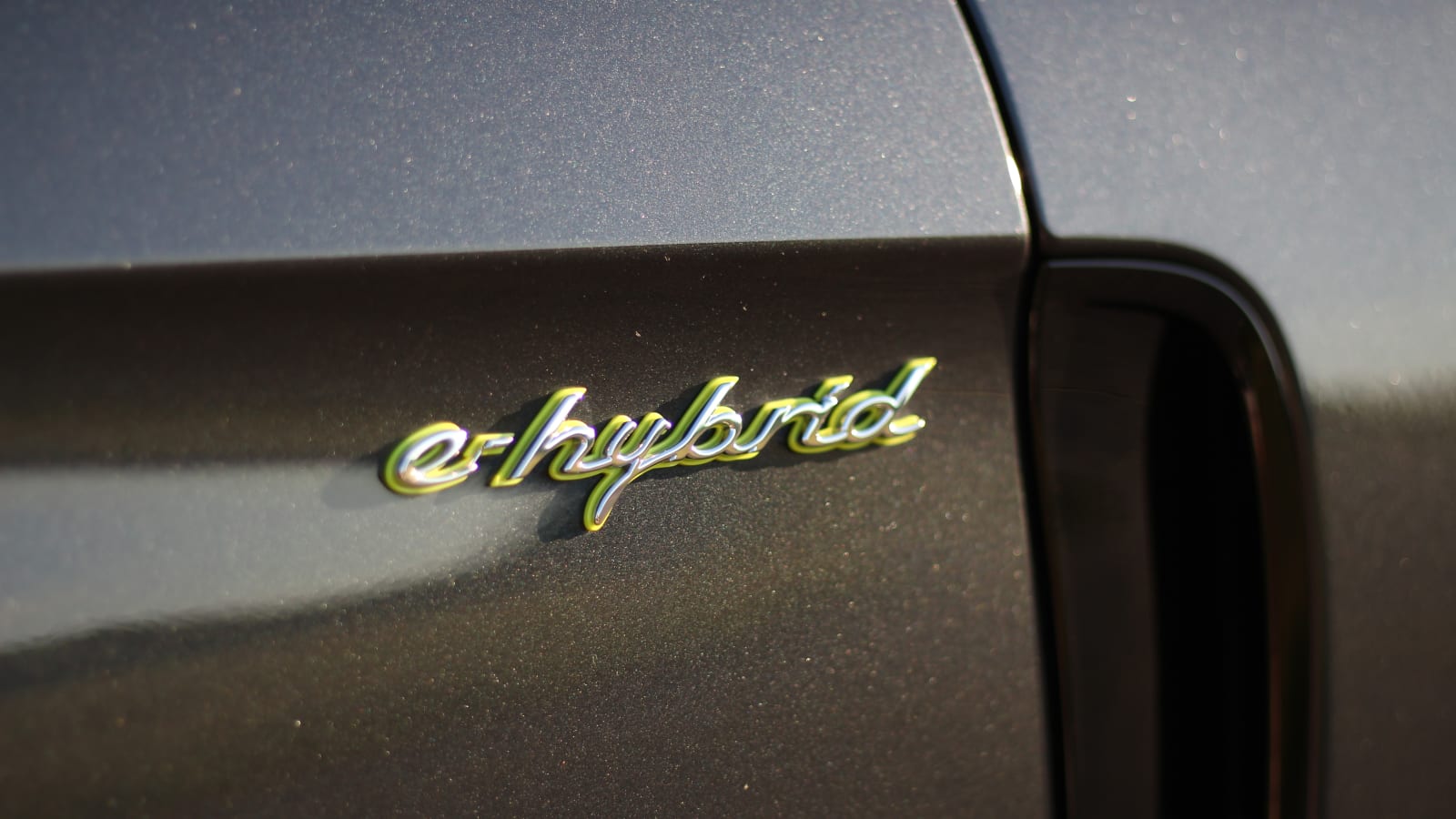 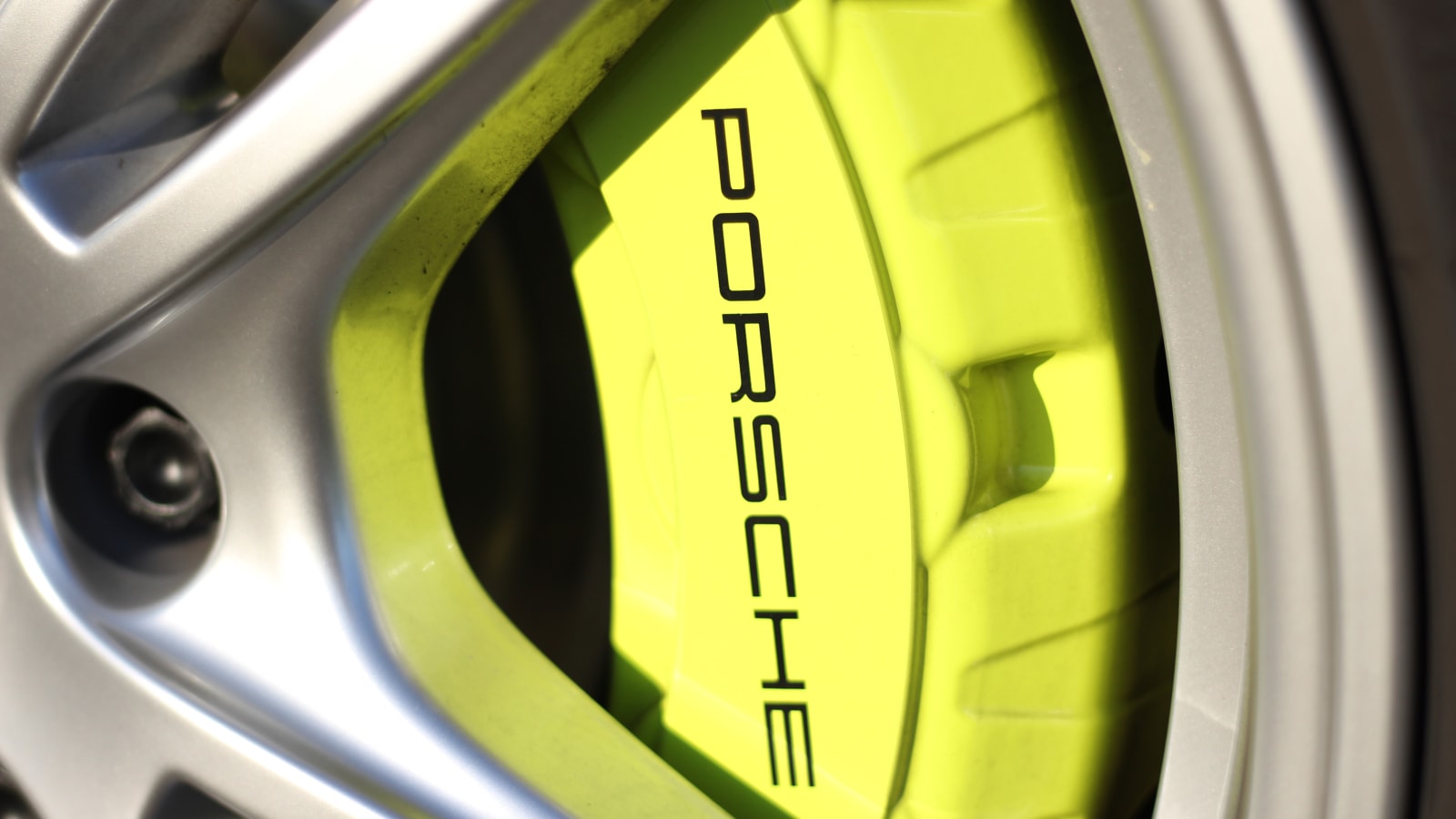 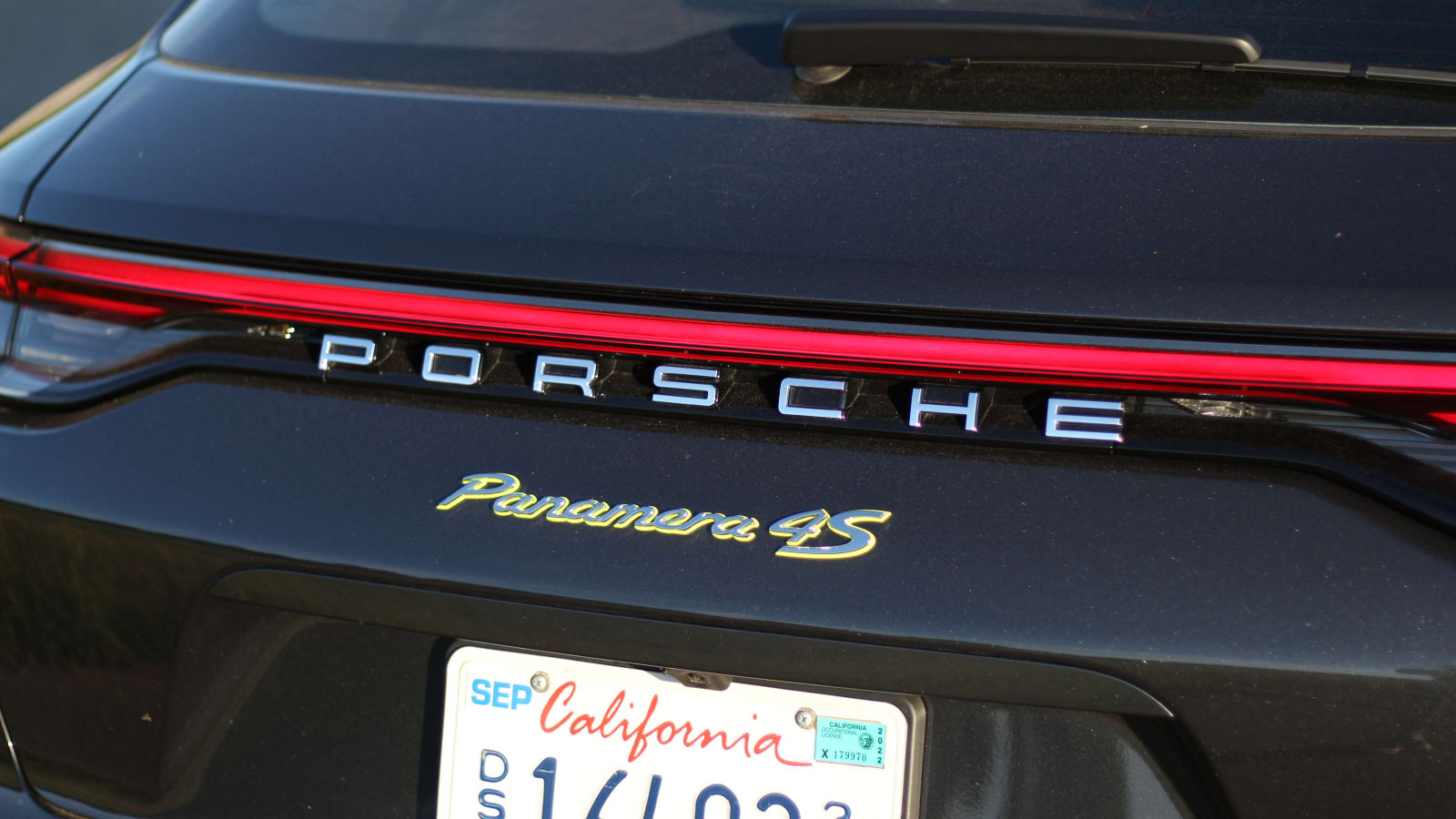 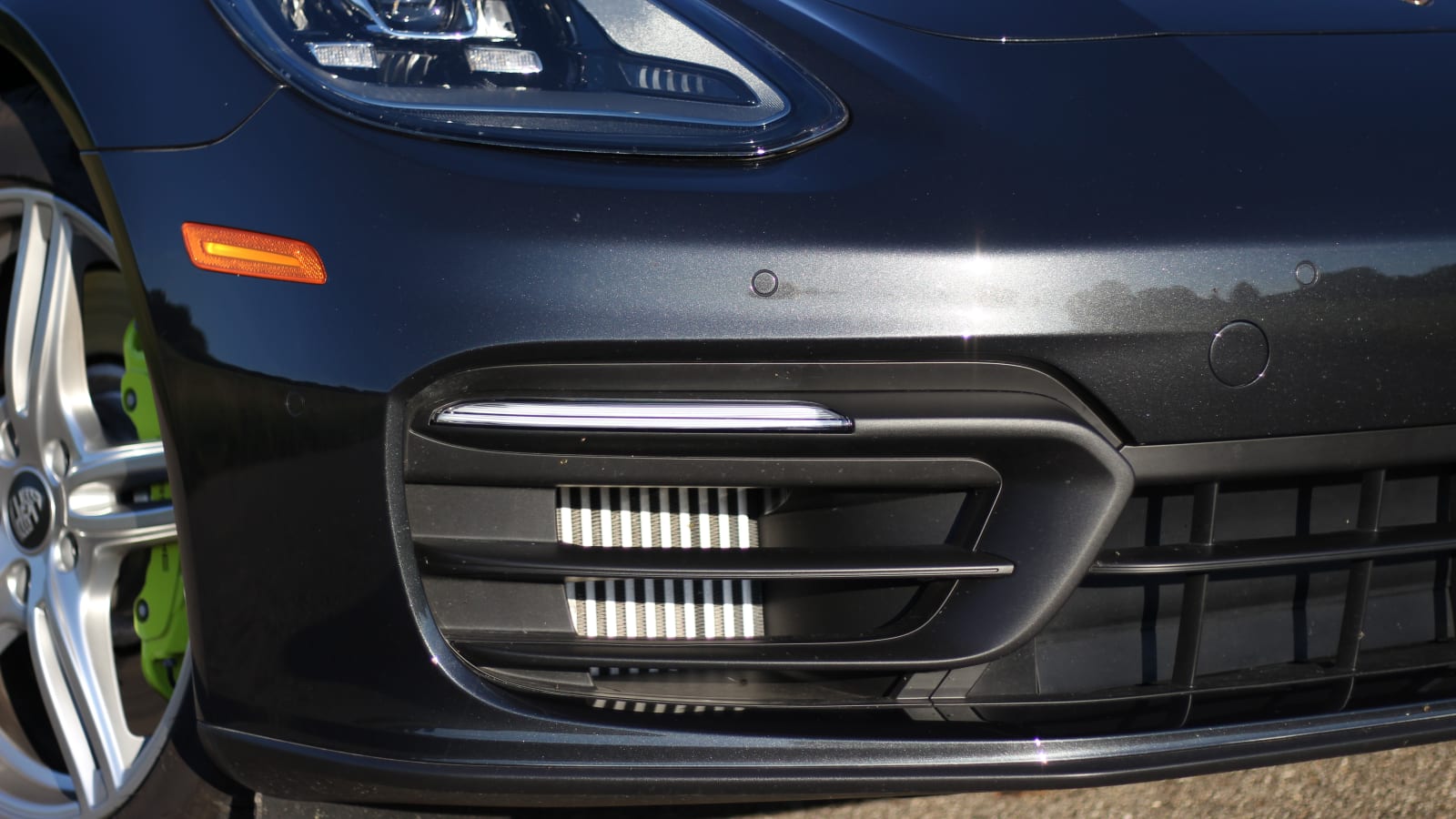 Other changes to the electrics include a new limitation to how high the battery pack will recharge via the engine (which it does in E-Charge, Sport and Sport Plus modes). Porsche now caps it at 80%, citing efficiency losses above that mark, so the only way to a 100% charge is by plugging in. Lastly, the regenerative braking system

is revamped to make the transition from regenerative braking to friction braking smoother. The pedal is typical Porsche when you’re hustling and using the brakes hard — very good with excellent feedback and pedal pressure. It’s a little more difficult around town when you’re trying to come to a smooth stop, as it requires a super delicate touch to be as smooth as conventional brakes.

Porsche’s other updates for 2021 apply to the Panamera lineup as a whole. The front fascia is lightly massaged, but you won’t notice the differences if the previous model isn’t side-by-side with the new one. The steering wheel from the 911 and Taycan is brought over; Porsche swapped the wheel’s volume +/- buttons for a scroll wheel. And the infotainment system gets a more powerful CPU to power a higher-resolution touchscreen.

When driven in anger, you could convince anybody that the 4S E-Hybrid is the Turbo model based on how relentlessly quick it is. The only giveaway is the sound. Unfortunately, the standard exhaust is meek, and the engine offers none of the aural drama that the V8 does. Porsche says the 4S E-Hybrid is 0.1 sec onds slower to 60 mph than the old Turbo, but it’s hard to complain considering the instant torque afforded by the electric motor, which fills in while the V6 builds boost. In the world of high-horsepower wagons, only the Mercedes-AMG E 63 S

and the more powerful Panamera Sport Turismo variants are quicker. 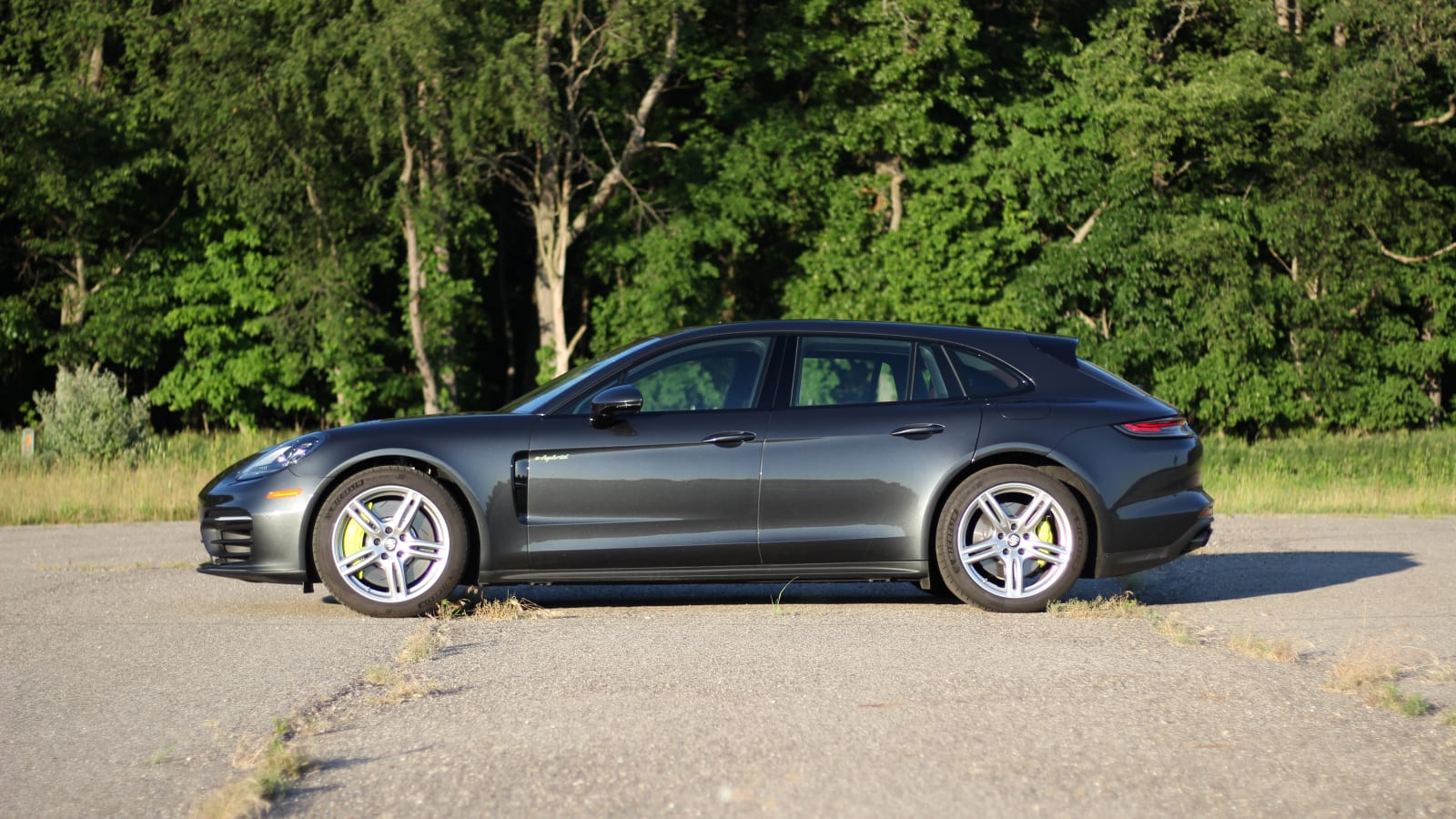 Fantastic handling is a given with any Porsche, and this Panamera is no exception. No matter the drive mode or damper setting (for the air suspension), body motions are held tightly in check, and the big wagon scythes through corners with alacrity for a 5,042-pound car. The small 911 steering wheel is a treat, too. We’ll note that our tester was fitted with the $5,010 PDCC Sport package that includes Porsche’s active roll stabilization tech and PTV+, which ups agility even further with an electronically controlled rear differential. Plus, it has the $1,650 rear-axle steering option that also nets Porsche’s Power Steering Plus (speed-sensitive steering system). We can’t say what the car would feel like without these options, but it seems safe to assume it would remain in the range of “damn good.”

As equipped, the Panamera is much more composed than an RS 6 Avant, and it goes stride-for-stride with the absurdly good AMG E 63 S Wagon. We’d need to drive the Porsche and Mercedes back-to-back to see which is the better technical partner, but there’s still no doubt the AMG is more fun to drive. Chalk that up to a stiffer, more performance focused chassis. And the sound. Sadly, the Panamera 4S E-Hybrid is just lacking in emotive pleasure in that arena.

If you’ve recently driven a 911 with the PDK, you’ll quickly notice that the Panamera’s transmission is just a shade off. That’s not totally unexpected considering this is a hybrid wagon, but just know this version of PDK isn’t the edgy, hair-standing-straight-up transmission you’ll find in Porsche’s sports cars

. You notice its lack of snappiness in downshifts, and paddle pulls into first gear are rejected unless you’re slowing to a near-stop. Don’t take this light criticism too hard, though. This transmission is still more fun than most to shift yourself, and if you’d rather the computer handle things, leaving it in Sport Plus mode will make sure you’re always in the right gear.

Just like seemingly every other Porsche, this Panamera Sport Turismo has a natural fluidity to how it attacks the road. Major undulations and imperfections are handily dealt with by the chassis without disturbing your line or focus. There’s no floaty, unrefined air suspension feel to the ride. The handling balance is just what we’d expect from a performance wagon. You can tell there’s a long rear end back there, but it’s no inhibitor to fun. The hybrid system’s integration to enthusiastic driving is done nicely. Any gaps where you might be waiting for boost to build are quickly filled by electric power — the overall experience is seamless. And while the AMG might be just a touch sharper in every way, there are more intense versions of the Panamera Sport Turismo

that could bring it up to snuff.

Acting as a daily driver is where this car arguably makes an even stronger argument for itself. The comfortable ride is utterly shocking for how well the Panamera handles. The suspension smooths out even the worst Michigan roads, and the quiet cabin becomes a positive when commuting. The standard Comfort Seats live up to their name, although the bolstering is inadequate for enthusiastic driving. In the style realm, we highly recommend the Marsala leather interior ($3,790) of our tester. 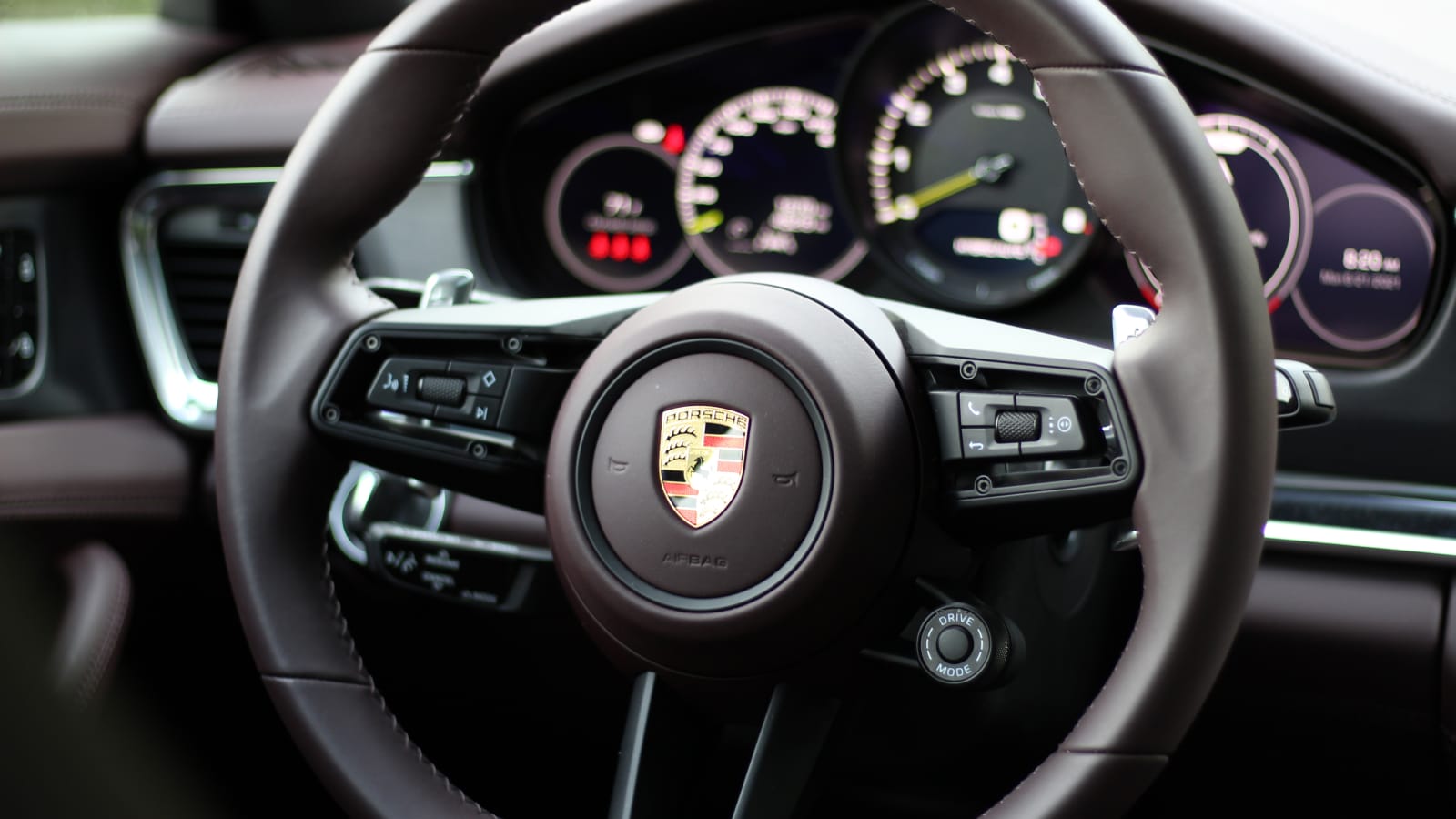 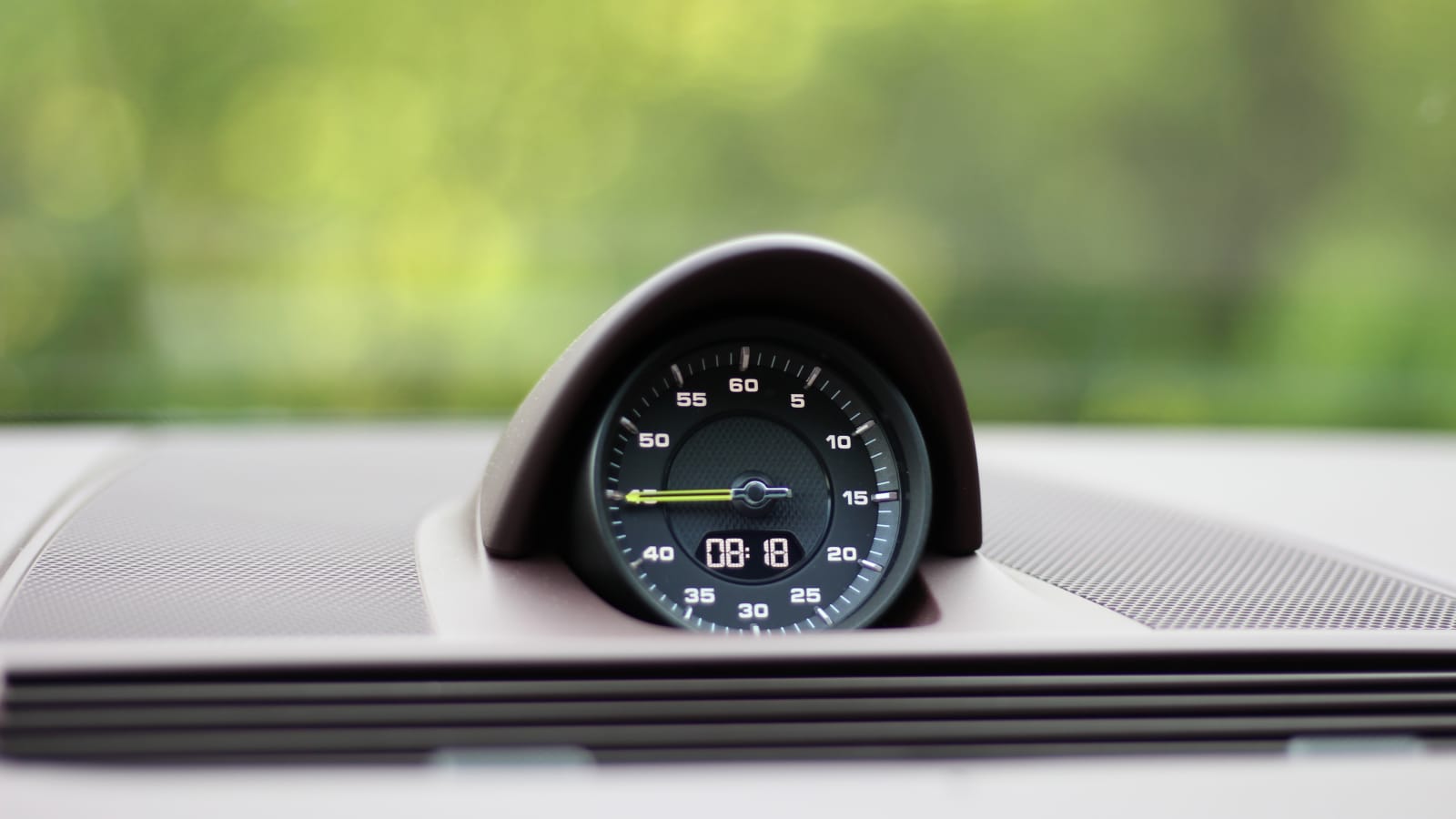 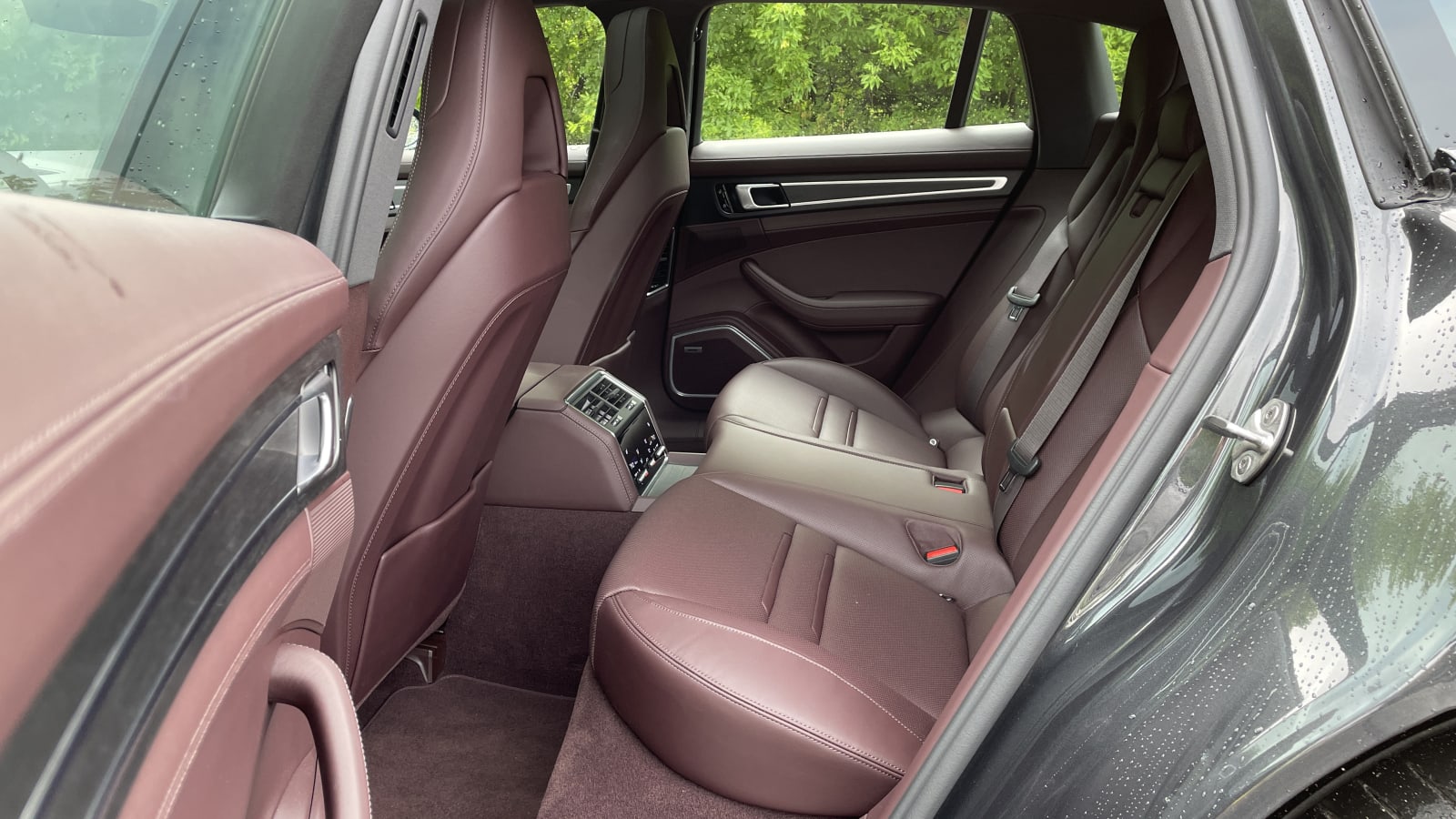 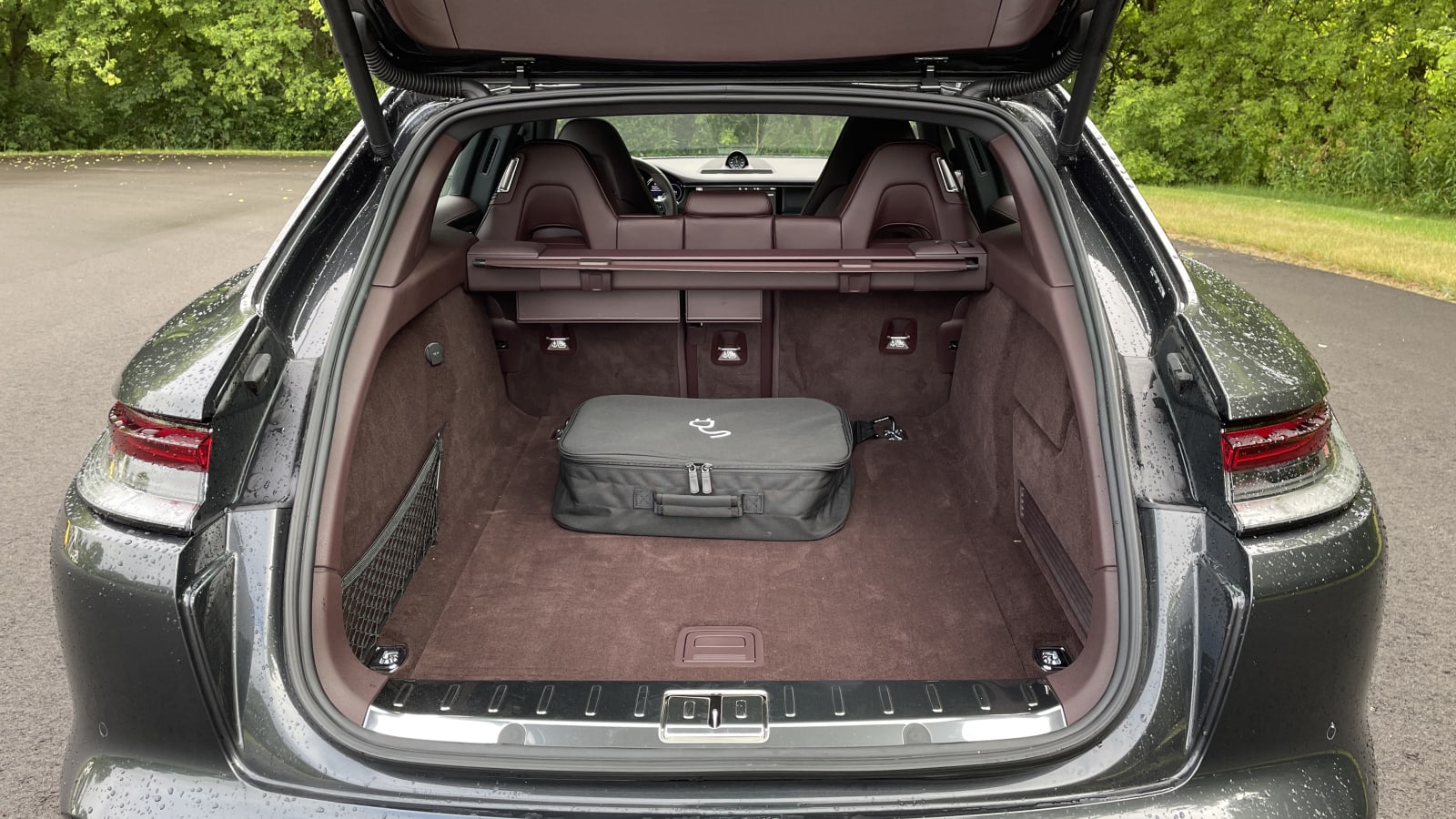 One might think utility comes standard in a wagon, but the Panamera Sport Turismo falls short in that metric. The rear seat offers plenty of legroom for two, but an enormous central tunnel means any center seat passenger must borrow heavily from the flanking seats’ leg space. At least there’s a nice control panel back there with haptic-touch controls similar to the ones on the center stack up front. Total cargo space is better than in the standard Panamera, and the shape of the space is more useful, but it falls far short of the other wagon competitors. At just 14.7 cubic feet, it’s less than half the volume of the RS 6 Avant or the E 63 S Wagon. Then again, this is a Porsche, you probably shouldn’t expect Country Squire utility.

The price is also typical Porsche. You’re looking at $118,650 for the 4S E-Hybrid, and spending more on options is inevitable given Porsche’s penchant for making every little convenience an extra-cost item. The $6,380 Premium Package is the best way to bundle a bunch of desirables including heated/cooled/memory seats, four-zone climate control, blind spot monitoring and more. Our car didn’t have the Sport Exhaust ($3,490), but that could help liven up the sound. Beyond that, we’d prioritize the performance options over most of the others.

The full tally on our test car hit $140,210. That’s more than either of the two in our Superwagon Comparison Test

from last year, and the 4S E-Hybrid is only considered mid-level in the Panamera lineup. However, since it’s a PHEV, it’s eligible for a $6,712 federal tax rebate. That only puts a tiny dent in the final price, but maybe it’ll make you feel a little better about optioning $4,310 wheels or the completely unnecessary $9,860 ceramic composite brakes. It’s tough to call this E-Hybrid “green” — beyond the Acid Green exterior accents — but it’s definitely the greenest choice among super-fast wagons from Germany. If you still want a V8, there are choices aplenty, but Porsche is proving rather forcefully with the 4S E-Hybrid that you don’t need one.