The standard-wheelbase 2022 Jeep Grand Wagoneer with the 3.0-liter Hurricane inline-six has its first set of official fuel economy numbers from the EPA. These fuel economy figures apply to the high-output variant, which makes 510 horsepower and 500 pound-feet of torque (to the eight-cylinder’s 471 hp and 455 lb-ft). The rear-wheel drive Wagoneer’s 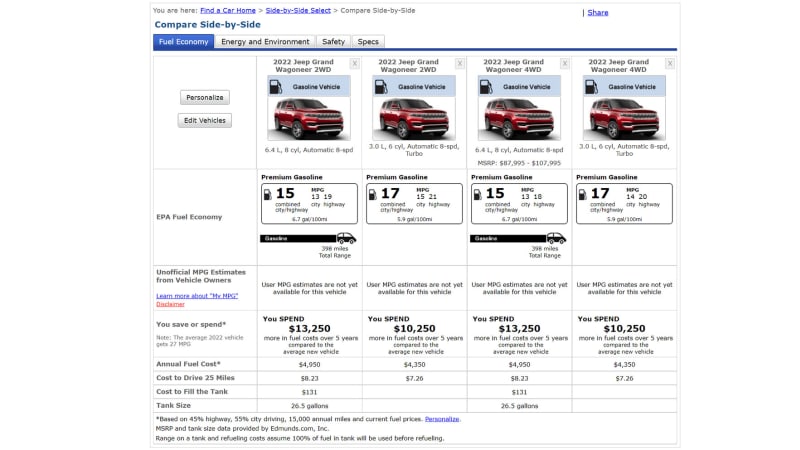 No, the Hurricane isn’t going to blow anyone away with its frugality, and that’s before real-world driving; the six-cylinder wouldn’t be downsized engine to see its EPA numbers take a hit in daily use, if that happens. The EPA assumes a savings of $600 per year in fuel costs for the six-cylinder for those who drive the Jeep

15,000 miles per year. The EPA doesn’t factor the $2,000 extra cost to option the inline-six, though. For now, the slight gains come with sizeable gains in power and torque, which will be felt when getting the Wagoneer moving.

Next year, Jeep will slot the standard-output Hurricane into the Wagoneer and Grand Wagonner lineups. That engine makes 420 hp and 450 lb-ft., and has been tuned specifically for fuel economy. It will be put up against the 5.7-liter V8 making 392 hp and 404 lb-ft., but it should be noted that the high-output inline-six in the rear-wheel drive Grand Wagoneer

No brakes! Will the EVs of the future omit friction pads entirely?