LOS ANGELES – Before driving the 2022 Porsche Taycan GTS on Big Willow and discovering that the electric sedan is pure Porsche on the track, we had to get there first. For that, we’d get behind the wheel of the other Taycan GTS, the new Sport Turismo wagon. Resplendent in Carmine Red paint, accented in GTS gloss black trim and free from the Taycan Cross Turismo’s fender flares and meager attempts at ruggedness, the GTS Sport Turismo is one sexy machine. You want to ogle it as much as you want to drive it, and we really wanted to drive it. So we did.

Normally, to get from downtown L.A. to verdant Rosamond, Calif., you’d take the 5 to the 14 and just get it over with, but the GTS Sport Turismo called for the long way. We’d call it the “scenic route,” but that would imply going slow enough or stopping at some point to actually admire the mountainous scenery. Angeles Crest Highway gets mentioned a lot for reasons beyond its proximity to the Los Angeles automotive press ­– it’s a phenomenal driver’s road that seems to have been built and maintained for the express purpose of being a phenomenal driver’s road. And everyone hauls ass on it like they’ve had to pee since Palmdale, from Porsches to Priuses.

OK, maybe not everyone, such as the guy in the similarly red Tesla Model S Plaid that pulled alongside us as we made our way up the long, steep right-hand sweeper at the base of Angeles Crest. At first, he seemed like he wanted to show off his Plaidness and tried to overtake the Sport Turismo in the right lane. We let him, the world is not our race track, and it would be interesting to see the pace the two supposed electric competitors would manage. Unfortunately, and perhaps content in his false victory, Mr. Plaid must’ve selected Parade Mode (that’s something, right?) and dawdled through the earliest bits of Angeles Crest. We’ve gotten stuck behind septic trucks going faster. He could’ve just bought a Leaf. Drive paused, time for pictures.

The GTS effectively splits the performance difference between the Taycan 4S and Taycan Turbo, including the actual motors used and consequent output. The front motor is shared with the 4S, while the rear is upgraded to the Turbo unit for a grand total of 590 horsepower. That’s right in the middle of its respective motor-donating siblings, and results in a 0-60 time of 3.5 seconds that’s similarly in between the 3.8 seconds for the 4S and 3.0 for the Turbo. As with every Taycan, there’s a unique two-speed transmission at the rear (every other EV besides the mechanically related Audi E-Tron GT has one-speed units) intended for improved efficiency at ultra-high Autobahn speeds. Special to the GTS is a louder, deeper artificial sound automatically engaged in Sport Plus mode, but is selectable elsewhere.

When you floor the accelerator, for instance after taking pictures of the vehicle’s back seat, the GTS Sport Turismo smoothly plants you into the firm 18-way adaptive sport seats, upshifting at around 55 mph in a way that’s oddly comforting in its familiarity. That GTS-specific artificial powertrain noise actually enhances the experience, and seems more authentic than other fake EV noises as it sounds like it emanates from roughly where the rear motor would be. Using Launch Control would probably deliver a more violent, neck-snapping thwack, but we’ll leave such frivolous showcases for Mr. Plaid. This car is about what happens after the launch.

Although the suspension componentry is shared with the 4S, the calibration and tuning are unique to the GTS. Porsche’s brake-based Torque Vectoring Plus comes standard, and our test car had the optional rear-wheel steering that rotates the back wheels by as much as 7 degrees (the norm is 5 degrees). The brakes are upgraded to a Turbo-matching 390 mm up front from the 360-mm discs in the 4S. Add it all up, and what you get is the most driver-oriented Porsche Taycan, the connoisseurs’ choice, the one most intended for roads like Angeles Crest (and the track) where ample precision and driving enjoyment are added without going for the speed-and-power overkill experience of the Turbo. It’s a recipe followed throughout the Porsche range with other GTS models. 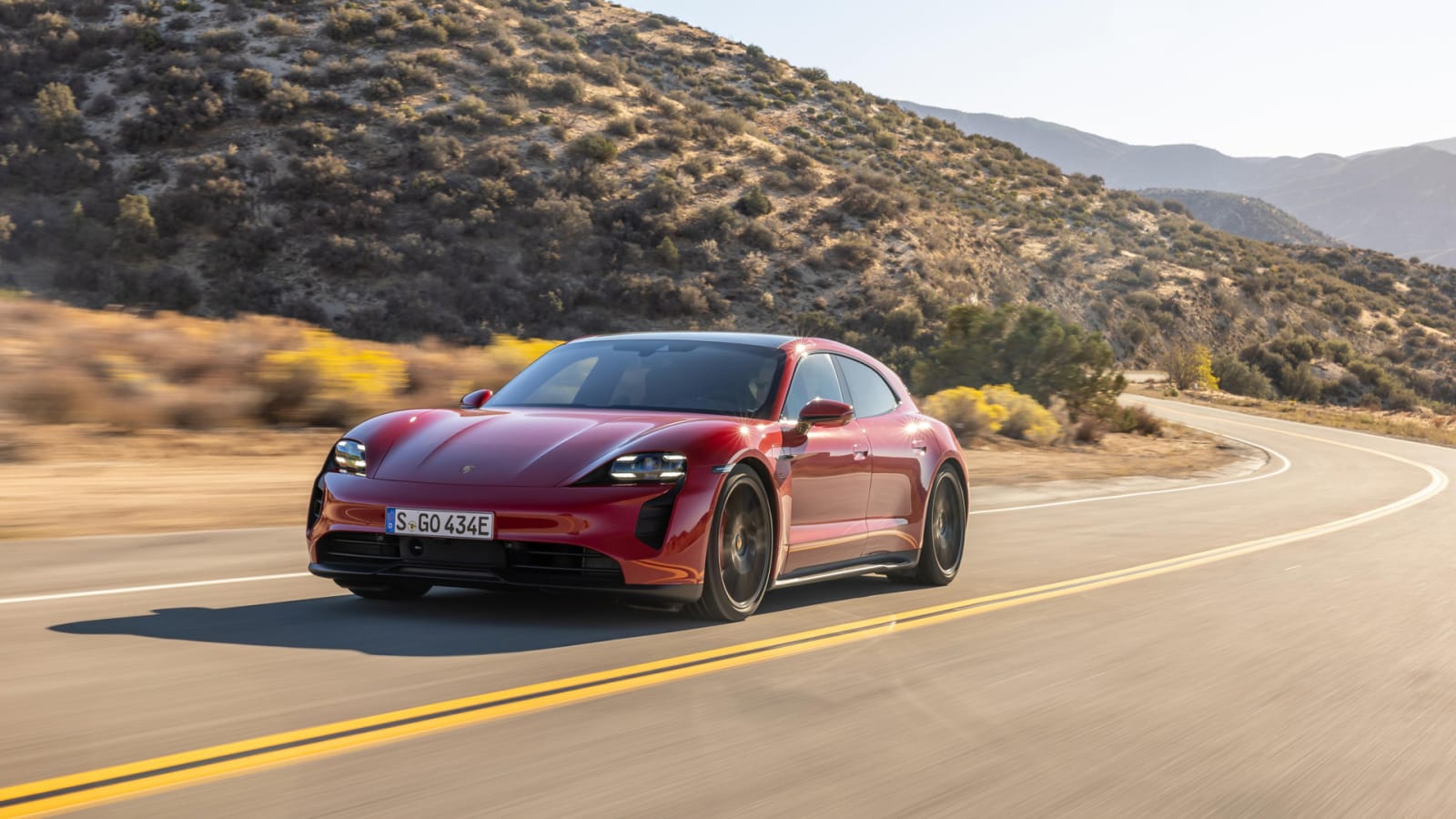 How much of an improvement or difference it makes relative to other Taycans is open for debate, as another wasn’t on hand at Angeles Crest, but as is, the GTS Sport Turismo displays awe-inspiring cornering ability. The all-wheel drive, the ultra-low center of gravity, the suspension and computer wizardry, the tire grip, etc. all amount to a car that remains resolutely neutral and glued to the pavement. There’s not a whisper of understeer or oversteer. You can just keep pushing, pushing, pushing, and it keeps slinging through corners like the laws of physics are merely suggestions. Like the speed limit on Angeles Crest, which is presumably something.

Porsche’s exceptional steering sorcery is found in the Taycan GTS just as it is in the brand’s sports cars, free from any mode adjustments or overt speed-dependent changes in effort or response. It contributes a tight, eager turn-in and remains wonderfully communicative as the tires load up mid-turn. The rear-wheel steering clearly contributes to its agility, but only in slower, more technical corners is it blatant enough to be detected.

The Taycan is a big and very heavy car, but it doesn’t feel it behind the wheel. You feel low, encased and part of the process. It just feels like a driver’s car, like something you’d take out just for the hell of it as opposed to a high-dollar EV daily driver that can do surprising things on the weekend. The GTS could be your toy.

And yet, unlike so many automotive toys, the GTS delivers truly astonishing ride quality. It didn’t even beat us up in the most aggressive Sport Plus mode on rougher patches of Angeles Crest. In Normal mode on the stretches of highway we did inevitably take, it was shockingly drive-all-day comfortable. 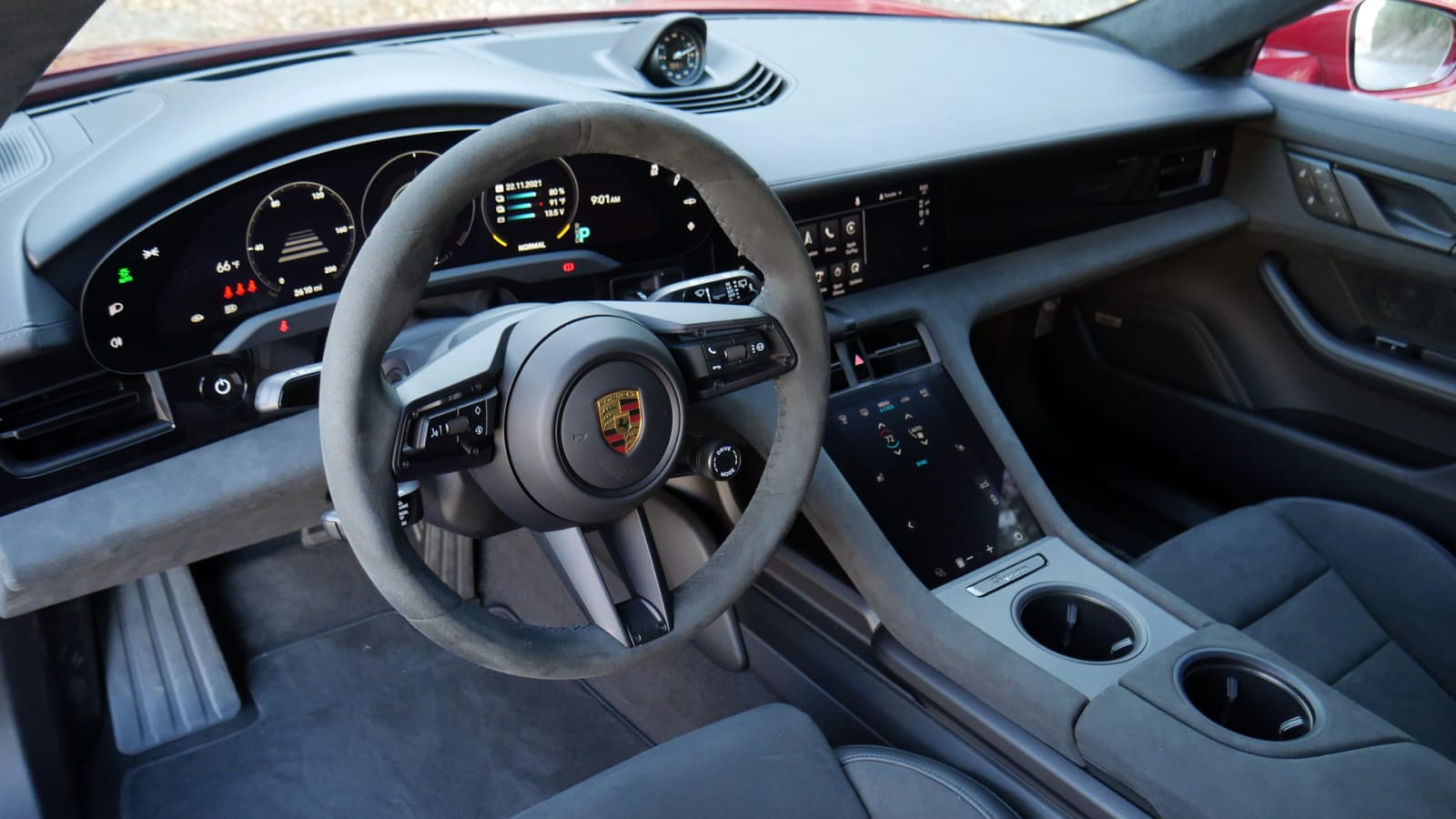 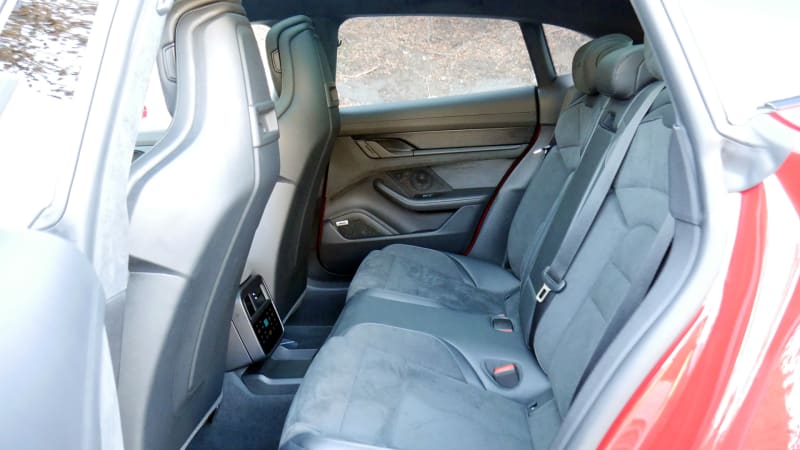 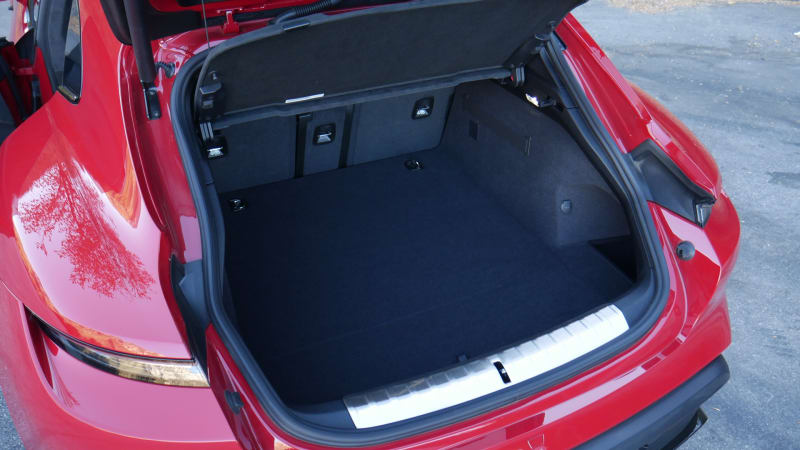 Let us also not forget that the Sport Turismo is a wagon, with a larger and more accessible trunk than the sedan. It also gains about 2 inches of rear headroom, which makes an appreciable difference. And although the GTS Sport Turismo does not get the various Cross Turismo models’ extra 20-30 mm lift for greater off-road ground clearance, it does enjoy superior aerodynamics and therefore range as a result (more on that in a moment). You can still outfit it with a power, GPS-linked front-end lift for steep driveways.

Inside, nearly every centimeter gets covered in black “Race-Tex” faux suede, and in such excess, it all looks a bit cheap, like well-worn towel. Happily, Porsche’s enormous options list is there to swap out the full Race-Tex treatment for leather or even just a different color. The rest of the Taycan’s comfort, convenience and customization menu is available, too.

The GTS shares its 93.4-kWh Performance Battery Pack Plus and 800-volt architecture with the Turbo and Turbo S. Official range estimates still haven’t been announced, but something in the range between 212 and 225 miles is likely. As Dan Edmunds discovered with the Taycan Turbo and Taycan 4 Cross Turismo, however, you can expect to do much better than that. You can also expect a quick recharge as long as you can find an open 350-kilowatt charger as we did in a busy Walmart parking lot on the drive back from Willow Springs. Well, quick in that it only took about six minutes to get from 33 remaining miles up to 124, an amount that greatly exceeded the electron splash needed to get us the rest of the way back downtown. It actually took longer to get in and out of the damn parking lot. Seriously, these fast chargers in malls need a rethink – there’s a reason Shells and Chevrons are placed right next to the highway and not in the middle of ginormous shopping complexes.

At the end of the literal day, the Taycan GTS Sport Turismo sat at the valet stand back in downtown L.A. having completed a comfortable, stress-free cruise and a drive on one of the world’s greatest driving roads that was just as fun and just as memorable as the last car we drove there: the mighty Porsche 911 GT3 Touring. They are different to be sure, but the experience was equally special. This dual nature, paired with its all-electric propulsion, puts the Taycan GTS Sport Turismo deep into the realm of “the only car you’ll ever need.” You know, like a VW GTI, but $134,650. And when you add up the price of a Macan, a Cayman and, um, a VW ID.4, it’s actually cheaper. So there, totally a bargain, too.