RENO, Italy — Maserati is blowing with the SUV gales. Sedans remain an important part of its heritage, but they’re no longer an important part of the new car market — especially not in the United States. Investing time and resources into filling sedan-sized gaps in the lineup would be like moving the deck chairs on a sinking cruise ship, so the Italian company is taking a different path to growth by expanding its SUV range. Named after a Mediterranean wind, the Grecale is positioned below the Levante and aimed directly at the Porsche Macan.

It’s not a supercar, but the Grecale is arguably the most important car that Maserati has ever released, one that could ultimately represent nearly half of its sales. I traveled to a town called Reno (not the place that Johnny Cash shot a man in) to get a feel for the smallest trident.

First, let’s dispel a myth: The Grecale is not merely a re-bodied Alfa Romeo Stelvio. Sure, both Italian people-movers are built on the Giorgio platform (which also underpins the Giulia and the latest Jeep Grand Cherokee), but several key changes were made in-house by Maserati.

“We started with the Giorgio architecture, and we added the features that are typically found in upper segments: an air suspension system, for example,” Federico De Medio, the company’s head of vehicle validation, told me. “We were given the possibility to further improve this platform, and we were able to increase the wheelbase by (about 3 inches),”  He added that electr onic tweaks were made as well.

The base Grecale GT consequently stretches 190.8 inches long, 76.7 inches wide, and 65.6 inches tall; the Modena and the Trofeo trim levels are 77.9 inches wide, while the latter measures 191.3 inches from bumper to bumper due to its specific body kit. Either way, the Grecale is relatively big for its segment: Porsche’s Macan, its intended closest competitor, checks in at 184.3 inches long and is one of the smaller in the segment. The Grecale’s weight ranges from 4,431 to 4,629 pounds.

One look at the Grecale’s front end shows what Maserati meant when it announced the MC20‘s exterior design would influence the rest of the range: the swept-back headlights are positioned above a wide grille with the trident emblem proudly positioned front and center. It’s not a clone of the MC20, but the family resemblance is perceptible. Moving beyond the nose, the three vents that have become part of Maserati’s design language are positioned on each fender, below the emblem that denotes the trim level, while the roof line peaks above the driver and slopes down towards a spoiler integrated into the hatch — designers put a bigger focus on sport than on utility. And, the shape of the rear lights echoes the units fitted to the 3200 GT released in 1998. Odd choice? Not really: don’t forget that was nearly a quarter of a century ago! 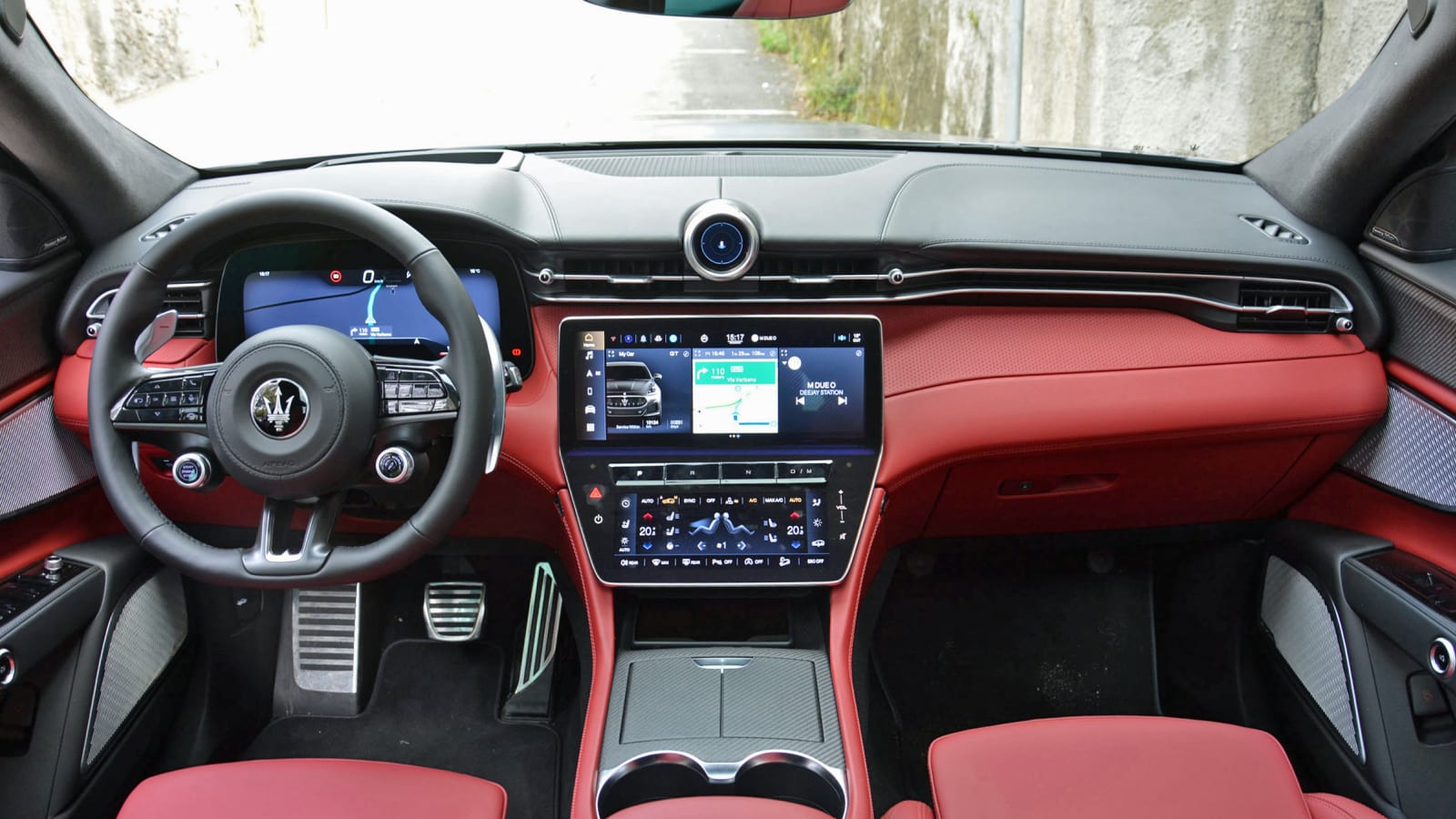 Inside, the Grecale offers just the right amount of technology. All of the features that buyers expect from a luxury car in 2022 are accounted for, like a digital instrument cluster, but none are overwhelming. Drivers seeking a screen that’s wider than the original Mini will need to shop elsewhere. Maserati explained that its goal wasn’t to make the Grecale feel like an iPhone on four wheels.

“Screens were never something that we were known for. And, to be honest, I don’t think that we want to be known for screens. Is the industry at peak screen? But, at the end of the day, we also want to reduce the amount of clutter in the car, so the result is what you see here,” company design boss Klaus Busse told me during the car’s unveiling. It’s an approach that should influence many upcoming cars.

It works, too: The dashboard’s design is clean, elegant, and all of the controls are placed where you expect to find them. One of the coolest features is the round screen positioned right in the middle of the dash, above the still sizable 12.3-inch touchscreen that displays the infotainment system. It’s almost smartwatch-like in the sense that it can be configured to display a clock, a compass, a meter that shows pedal inputs, and a g-force meter. It also displays a phone-shaped icon when the wireless device charger is sending juice to your phone. 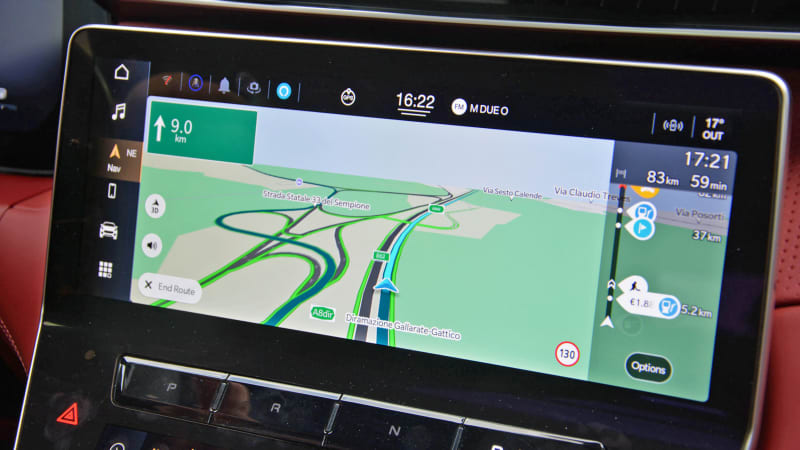 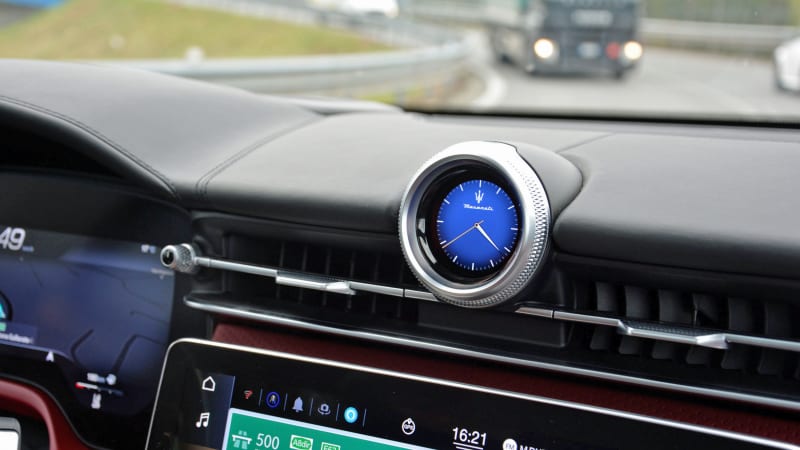 For a company rooted in luxury, Maserati has made a few notable missteps in recent years: Raiding the Fiat-Chrysler parts bin for some of the Ghibli’s interior parts, for example, looked better on a corporate balance sheet than in showrooms. Luckily, there’s not much of that in the Grecale. The cabin is built with quality materials that look and feel like they belong in a luxury car, though the buttons on the steering wheel are shared with the aforementioned Grand Cherokee (which, to be fair, has a legitimately luxurious interior). My test car came equipped with gorgeous red leather upholstery and cool carbon fiber trim left bare, so it’s textured to the touch rather than glossy. There are countless other ways to configure the Grecale, of course, including different upholstery, stitching, and trim choices. And, the sky (or, more realistically, your wallet) is the limit with Maserati’s Fuoriserie program.

Maserati offers the Grecale in three flavors: GT, Modena, and Trofeo. Power for the GT comes from a turbocharged, 2.0-liter four-cylinder engine that works jointly with a 48-volt mild-hybrid system to develop 296 horsepower and 332 pound-feet of torque. Stepping up to the Modena unlocks a 325-horse evolution of this drivetrain with the same amount of torque. Both come with an eight-speed automatic transmission and all-wheel drive.

Pictured above, the range-topping Trofeo receives a model-specific version of the excellent Nettuno V6 inaugurated by the MC20 in 2020. Maserati didn’t quite hoist the twin-turbocharged 3.0-liter directly out of the MC20. In the Grecale, the six-cylinder features a wet-sump oiling system, revised turbochargers, and cylinder deactivation technology that shuts off the right bank in low-load conditions, like when cruising on the highway. All told, the Trofeo puts 523 horsepower and 457 pound-feet of torque under the driver’s right foot — that’s down from 621 and 538, respectively, in the MC20. More important, it’s more than the 434-horse cavalry unleashed by the range-topping Cayenne GTS.

My time behind the wheel was limited to the Trofeo, which is an excellent way to get acquainted with the Grecale. In the MC20, the Nettuno V6 is an advanced masterpiece of an engine that’s full of brio: It’s responsive and it sounds great, especially at higher revolutions. It loses none of its character in the Grecale, and the supercar heart gives this family-friendly SUV a dose of Italian flair that helps it stand out in an increasingly crowded segment. That’s not to say that the Grecale drives like a supercar, it doesn’t and it wasn’t designed to, but it’s seriously quick. And the eight-speed automatic transmission (a beefier version of the unit fitted to four-cylinder models) fires off quick shifts, either on its own or by using the massive steering wheel-mounted paddles. Don’t shift up too soon: The engine doesn’t generate its peak torque output until 3,000 rpm, and peak horsepower arrives at 6,500 rpm, so it really comes alive when you explore the upper echelons of the rev range.

While the Grecale is all-wheel-drive-only, the rear-biased Giorgio platform unlocks the type of sporty handling normally associated with the Maserati name. It’s clear that driving dynamics played a significant role in chassis development. The overall package feels tuned with comfort in mind, however, which is normal considering that the Grecale’s main mission isn’t to set a record at Monza; it’s to comfortably carry a family and their gear. The suspension is firm but not harsh (even in its sportiest setting) and the steering is reasonably direct without a ton of feedback. It’s not raw. It’s just athletic enough to satisfy most buyers, and the 3.6-second sprint to 60 mph amplifies this impression.

Huge brakes keep the Nettuno in check; the front calipers are six-piston units provided by Brembo. If I could travel back in time and join the development team, I’d dial more bite into the braking system. It’s a setup that’s reassuringly powerful, whether you’re zig-zagging through Milanese traffic or slowing down for a toll both on the autostrada, but the pedal’s feel and travel takes a few miles to truly master. 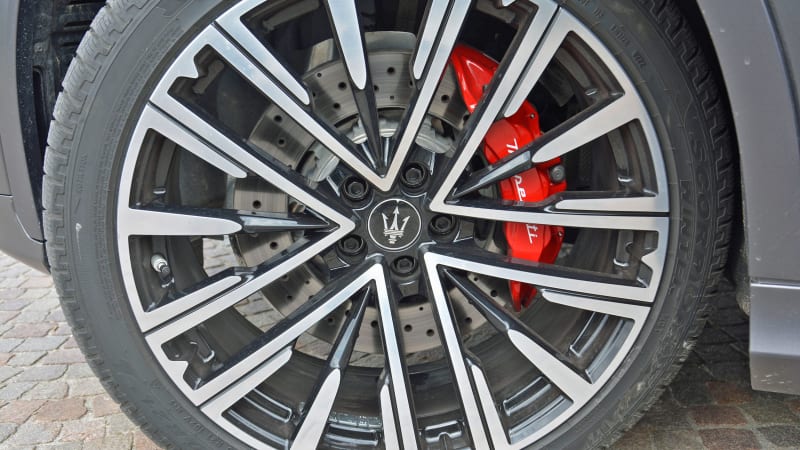 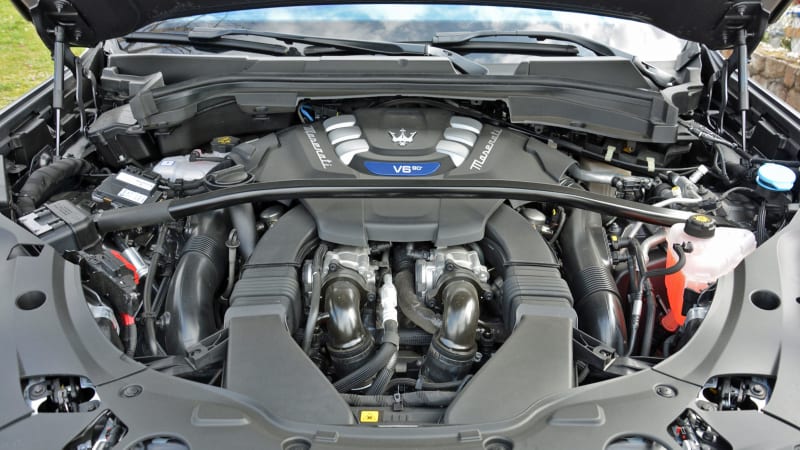 One of the interesting (and surprising) aspects of traveling in the Grecale is that it gives folks who argue rear-wheel-drive (or rear-wheel-drive-biased) cars are cramped inside something to chew on. Whether you’re sitting in the front or in the back, you’d need to be NBA-sized to complain about a lack of space. Both rows of seats are spacious and comfortable, even in spite of the meaty bolsters up front, and the interior is quiet with the exception of the Nettuno engine singing its anthem. Trunk space is adequate in spite of the sloping roof line.

On paper, the Maserati renaissance started in 2020 with the launch of the MC20. It inaugurated a design language, it ushered in the Nettuno V6, and, broadly speaking, it illustrated a new approach to creating cars — it’s the tip of the trident. But, it’s also a halo car, and it stands to reason that designers and engineers were given a lot more leeway during the development process because an exotic two-seater with a mid-mounted engine isn’t a terribly price-sensitive car. Conveying these attributes to the compact SUV segment, a turf that Maserati has never been present in, was a risky move. Yet my time driving the Grecale suggests that the company pulled it off. Put simply: It’s not half-assed. This is a serious, well-thought-out attempt to grow (especially in America) by luring buyers with substance rather than with incentives.

Maserati dealers across the United States will begin receiving the Grecale in fall 2022. Pricing for the GT and Modena Limited Edition trim levels is pegged at $64,995 and $78,895, respectively, figures that include a mandatory $1,495 destination charge. There is no word yet on how much the standard Modena or the flagship Trofeo will cost, though I’m betting the latter will carry at least a $10,000 premium over the GT Limited Edition. Significantly, that first number makes the Grecale the most affordable car that Maserati has ever released on our shores. It costs considerably less than the Ghibli sedan, which currently starts at $78,600. It even undercuts the Biturbo — remember that one? The boxy compact that was offered in the 1980s cost $26,874 in 1986, a figure that represents approximately $69,600 in 2022.

What we have, then, is an attractive SUV with a competitive price tag that was created for a huge segment. Will it sell? Naturalmente!