Are these spy photos of a new Audi Q9?

A new mystery Audi prototype was caught undergoing winter testing this week. Could this be a new Q9 to slot in above Audi’s current range-topping midsizer, or is this a special model that isn’t intended to join the rest of Audi’s global lineup?

This pro totype boasts quite a bit more upfront real estate than anything else we’ve seen with the four rings on it. The vertical fog lamp assemblies flanking the grille add a sense of vertical size that isn’t present on the sleeker, more car-like Q7

. The taper of the greenhouse is also less pronounced, which tells us there’s probably quite a bit more room for third-row passengers and cargo. There’s also significantly more D-pillar sheet metal behind the rear window, and it has an upswept lower edge, rather than the roughly parallel lines of the Q7’s rear pillar. 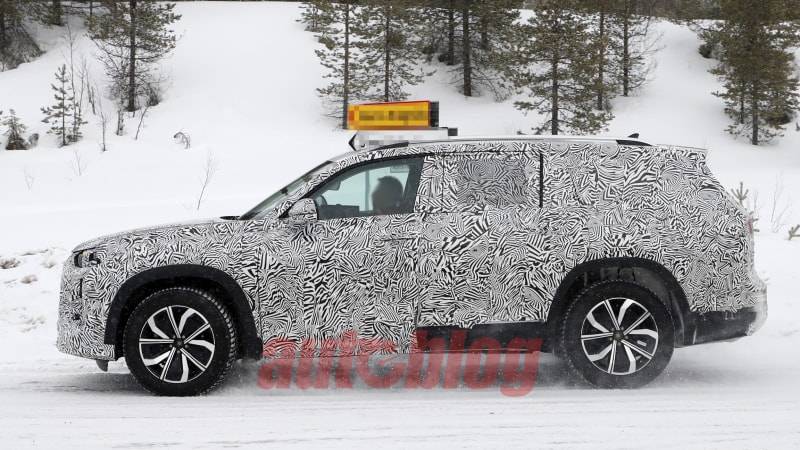 While it would be easy to write off the upright nose of the prototype as a trick of the camouflage, viewing this new mystery car alongside a 2020 Q7 prototype (above right) brings the differences into stark relief. The larger, pronounced arches of the new prototype stand out immediately when viewed side-by-side, and while the driver of the new prototype may simply be smaller in stature than that of the Q7 shown here, the proportions simply point toward it being a larger vehicle.

So, this just leaves us with one question: What is it? A Q9 makes sense, as the Q7 is a bit undersized in the luxury three-row space. Plus, Audi has been camped out

on the Q9 nameplate for nearly a decade. However, our spy photographer notes that the style of camouflage used on this prototype is more typical of products being tested for the Chinese market. It’s possible that this more rugged, upright SUV is intended to appeal to the rural buyers of the PRC, but it seems even more likely that Audi is going for something with some universally rugged appeal. For now, all we can do is speculate.

Singer removes ACS car from its website after Porsche objections