a truck that looked like a K5 Chevy Blazer, but was actually a modern late-model Tahoe underneath. It was the product of Arkansas shop Flat Out Autos, which reskinned modern GM full-size SUVs to look like their predecessors. Now, the same shop is planning to release a GMC version, converting Yukons to Jimmys.

We were impressed by Flat Out’s workmanship, beautifully blending the lines of the Blazer

into those of the Tahoe. The result was a cohesive design, not just a panel swap. It clearly required a lot of work, which helped justify the $69,000 price tag, not including the cost of the donor Tahoe.

At least one new owner was so impressed that they recently purchased four identical Blazer conversions at once. The quadruplets were all finished in blue with a white roof and all based on brand-new 2020 Tahoes.

Obviously, with such demand it was only natural for Flat Out to explore other options. On Facebook

the company said it was working on a 1972 version with an eggcrate grille. Now, they’ve also released a rendering paying homage to the K5 GMC Jimmy.

The Jimmy conversion uses the original’s quad-headlight face, crosshair grille and GMC badging. Like the Blazer conversion, it adds chrome bumpers and milled door handles while adapting the original’s 2-door design to the new truck’s 4-door body. The rendering only shows the front three-quarter view, but presumably a new carbon fiber rear door would have to be created as the Blazer’s says “Chevrolet” across the back.

Flat Out says that all the modern conveniences found on the donor Tahoe will work on the conversion, including parking, blind spot and lane keeping sensors. If you have the coin, it’s a great way to have retro style without giving up modern safety and performance. 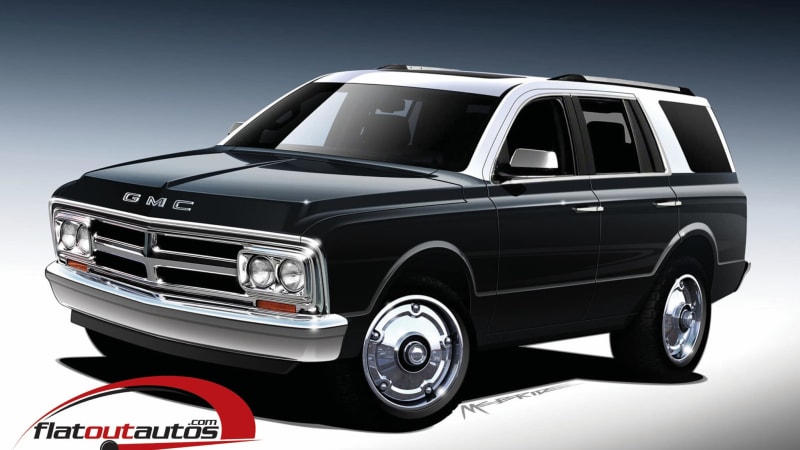 The new Blazer has been disappointing to many fans that had hoped for a Bronco-like SUV. Instead, GM gave us a crossover. The Flat Out conversions might be a good compromise, and expanding it to the GMC brand only makes sense. Obviously there’s no requirement to use a GMC Yukon

as the donor vehicle for the Jimmy, as it’s functionally identical to a Tahoe, but wouldn’t you want to keep it in the family?