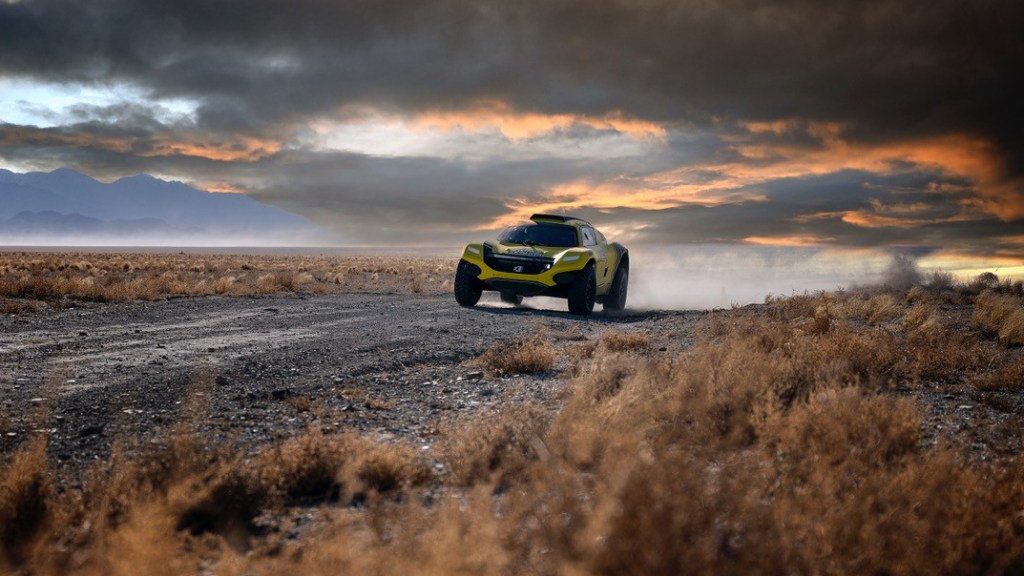 There are just over 100 days until Extreme E debuts in the sands of Saudi Arabia. Half a world away from Al-Ula are sands of a different sort in the desert of northwestern Nevada, which is where Chip Ganassi Racing shook down the newest race car to join its illustrious fleet: The Odyssey 21. Developed by Spark Racing Technology, the 400 kw (equivalent to 550 horsepower) 1650-kilogram (3,360 lbs.) all-electric off-road racer represents a significant pivot for the CGR organization that has garnered massive success in IndyCar, NASCAR, IMSA and Global RallyCross.

“When you walk into the Chip Ganassi Racing shop and see all those banners and trophies marking all those wins and championships, you realize that there’s a lot to live up to,” says one half of the team’s Extreme E driver line-up, Kyle LeDuc.

LeDuc sat in the domed tent that will be his and the team’s base while at the far-flung locations that will host Extreme E. Strong wind and blowing sand pelted and shook the tent, but LeDuc hardly seemed to notice. A new car, new team and new series is a lot to take in at once, especially when the car is unlike anything seen before.

“Something new is always something exciting,” he goes on to say. “But we’ve all done this. Yeah, it’s all different than anything else, but at the same time, Sara (Price) and I have raced in these kinds of environments. We know how to drive in it, we know how to live in it. And the team knows how to win across so many forms of racing so, I know we are starting off on the right foot.”

Sara Price is the other half of the driver line-up. A former motocross racer, X-Games medal winner and the first woman to drive the grueling Baja 1000 solo to finish second in the trophy truck spec class, she finds herself once more in a trail-blazing position.

“We’re from a realm of off-road racing that is its own niche and we coming together with teams from F1 and other forms of racing to do something that hasn’t been done before,” says Price. “We’ve all been brainstorming about what we are potentially going to encounter at each of the venues. There’s no track to speak of and we don’t even know what kind of track there’s going to be, so we have to dig deep into our reserve of knowledge to be prepared for whatever they throw at us.”

Dave Berkenfield has been charged by Ganassi to manage their new foray into Extreme E. Like any race CGR lines up at, the mission is to win. But, Berkenfield also acknowledges that there is a bigger picture to consider.

“We’re looking at the future. Motorsports is changing, and we are betting that this is part of that change,” he says. “The series exists to race, but also, to spread a bigger message, and we are here to support that as well.”

Demystifying the unknowns, applying their collective knowledge and looking to the immediate future is why the team came to this remote space in the Nevada desert. Around the world, Extreme E teams have taken delivery of their Odyssey 21 for a chance to get acquainted with and shake down the car that no one has any prior experience with. As is often the case in these scenarios, the series has limited the Odyssey 21’s power output until everyone gathers in Spain for the first official test in December. For now, it’s enough to begin understanding the car’s systems and training on procedures.

“We (as a team) all come from so many different backgrounds, which is a huge benefit, but we also have to learn how to develop that common lingo and bring our experience to something we are all learning,” says Price.

For LeDuc, who has been around off-road racing his entire life and had a direct hand in building every truck he’s ever raced, jumping into the spec-built Odyssey 21 requires a significant adjustment.

“Yeah, I’m not going to lie; it’s something I’m still wrapping my head around,” he admits. “It’s also just part of the challenge and the fact that every team is getting the same package eases some of the anxiety around it.”

The shakedown began with straightforward runs up and down a graded gravel road for system checks and making some baseline adjustments. That was followed the next day by laps of a short circuit the team put together that began on the gravel road before traversing a section of desert and then diving into a dry wash. Out of the wash, it was back over the rough desert-scape to finish the circuit with a high-speed blast on the gravel road to a “pit area” where LeDuc and Price would practice the driver change. Even at half power, the Odyssey 21 made short work of the circuit with only the sound of the sand and rocks beneath its tires and the high-pitch, low-decibel whine of the drivetrain to warn of its passing.

It may be a new toy, and the first race is still a ways off, but Price, LeDuc and the rest of the squad all had their game faces on. The opportunities to learn, adapt and adjust are few are far in between and CGR isn’t squandering any opportunity they have to prepare. In the calm around the discussion table there’s talk of the future and the excitement of being a part of something groundbreaking. However, when the car is switched on and drive is engaged, the Odyssey 21 is just a machine built for racing. Chip Ganassi Racing is organization built on winning in places like Indy and Daytona. Now, they’re aiming to add places like Kangerlussuaq in Greenland or Tierra del Fuego in Argentina to the list.

For a deeper dive into Extreme E, checkout the Technology Issue of RACER magazine, available now.