SEOUL — The global auto industry’s shift to electric vehicles (EVs) has spurred an expansion race among battery makers and led to a growing skills shortage.

Global EV sales, estimated at 2.5 million vehicles in 2020, is forecast to grow more than 12-fold to 31.1 million by 2030 and account for nearly a third of new vehicle sales, according to consulting firm Deloitte.

As of end-June, the Chinese company had an annual battery production capacity of 65.45 Gigawatt hours (GWh) and an additional 92.5 GWh of capacity under construction.

The company announced a plan in August to set up a production base in Shanghai, a move that will put it close to Tesla Inc’s Chinese production base.

The South Korean leader expects its production capacity to reach 155 GWh by the end of 2021 and plans to raise that to 430 GWh by 2025 — which could power about 7.2 million EVs.

It plans to invest more than $4.5 billion in its U.S. battery production business through 2025. The plans include two new plants, jointly built with GM in Ohio and Tennessee, which would allow LGES to manufacture 70 GWh of batteries in the United States by 2024.

LGES already has a factory in Michigan with an annual production capacity of 5 GWh.

In China, where the company makes cylindrical battery cells for Tesla, it has invested about 5.7 trillion won ($4.8 billion) and plans to invest another 1.5 trillion won.

It has invested about 6.8 trillion won in Poland since 2016 to secure an annual production capacity of 70 GWh and plans to make another 2.5 trillion won investment.

In July, LGES and Hyundai Motor Group said they would invest $1.1 billion to jointly set up an EV battery cell plant in Indonesia. 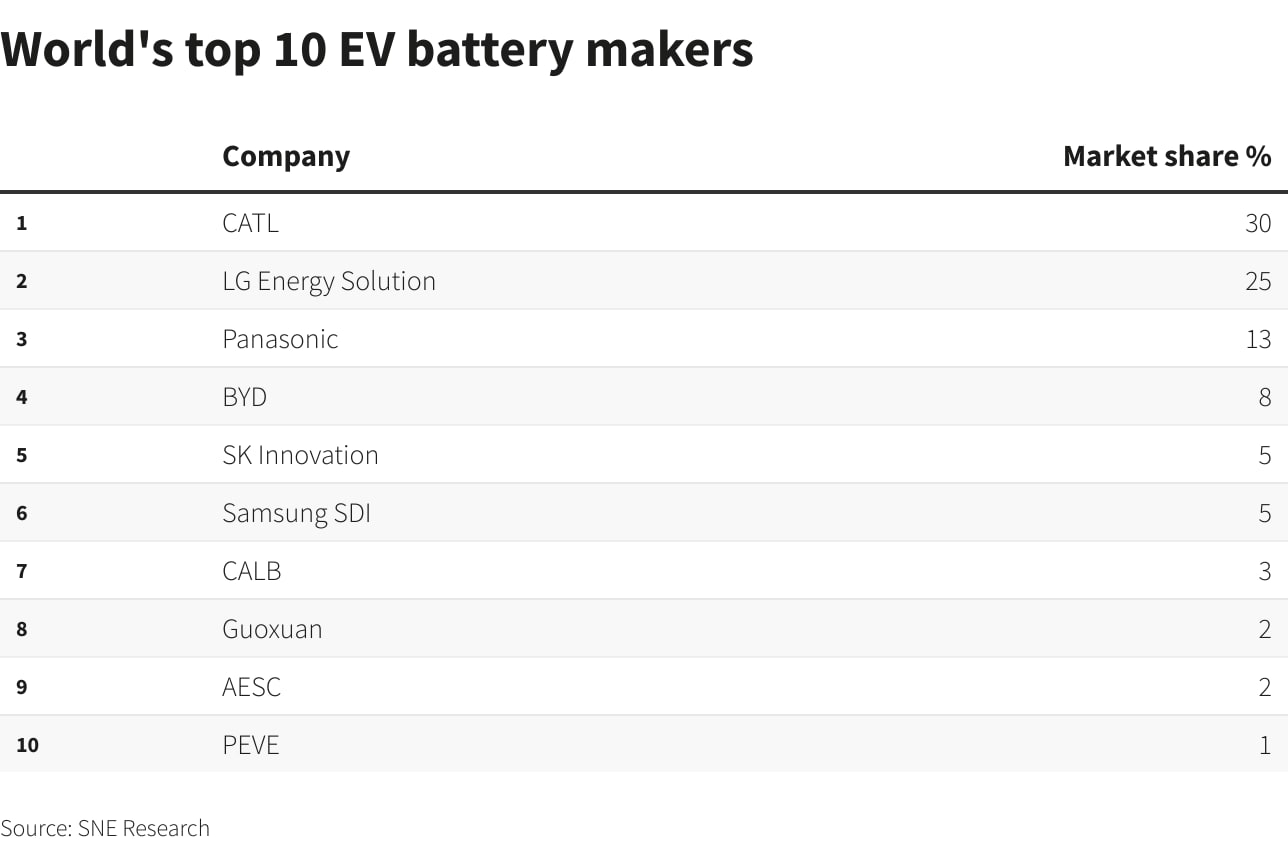 The Japanese company manufactures cylindrical NCA (Nickel-Cobalt-Aluminum) batteries in the United States at a plant in Nevada and in facilities in Japan. Nearly all go to Tesla.

It does not disclose its manufacturing capacity, but in May said it was aiming to expand the 35 GWh Nevada facility because of increased demand from Tesla. The Nevada plant, built for $1.6 billion, was opened in 2014.

Panasonic plans to begin a test line in Japan this year to make a new cylindrical battery designed by Tesla to halve battery costs. It also has a joint venture with Toyota Motor, Prime Planet Energy & Solutions, to develop prismatic batteries.

Panasonic is also considering building an auto battery plant in Norway to expand into Europe, but has yet to give details.

SK On has a combined global annual production capacity of 40 GWh — 27 GWh in China, 7.5 GWh in Hungary and the rest from South Korea.

It plans to boost that more than five-fold to 220 GWh by 2025, with the expansion primarily focused on the U.S. market.

SK On is building two EV battery plants in Georgia with a combined annual production capacity of 21.5 GWh that will begin production in early 2022.

With partner Ford Motor Co, it has a 10.2 trillion won investment plan to build three battery plants in the United States with a combined annual capacity of 129 GWh of batteries, enough to power about 2.2 million EVs.

SK said it has an industry-leading order backlog of 1,600 gigawatt hours, enough for 27 million vehicles.

It has entered an agreement for a joint venture with automaker Stellantis NV to produce EV battery cells and modules in the United States.

The aim is to start operations by the first half of 2025 with an initial annual battery production capacity of 23 GWh, which can be ramped up to 40 GWh in the future — enough to power about 670,000 electric vehicles, Samsung SDI said.

Samsung SDI does not disclose breakdowns of its investments or production capacity of each battery production site.

In July, Reuters reported the company, whose customers include Ford and BMW, may build a battery cell plant in the United States.