LOS ANGELES — Pulling onto Wilshire Boulevard, in the heart of Beverly Hills, in a Ferrari, does not exactly make one unique. Ferraris are ubiquitous in L.A.’s most overtly tony neighborhood. But driving a Ferrari, silently, under pure electric power – as I did in the brand’s newest supercar, the SF90 Stradale – made this experience extremely distinctive, and enjoyable, a summation that carried over to my entire day with the car.

The Bianco Caprino SF90 Stradale test car had specs that, while shaming of just about everything else on the road, feel appropriate for a range-topping product from Maranello. It hosted a twin-turbocharged 4.0-liter V8 that produces 769 horsepower. Sandwiched between this mid-mounted motor and its redesigned eight-speed dual-clutch automated transmission is an electric motor that provides extra oomph to the rear wheels, adding output during the nonexistent turbo lag. But the real news is up front, where two more electric motors – one at each hub – give the forward wheels pull and allows for torque vectoring. Combined, these three volt-suckers add 217 hp to the mix, for a grand system total of 986 hp. Ferrari prefers to advertise

the metric horsepower rating of “1,000 CV,” which is admittedly sexier.

Because owning a Ferrari is all about options, a haptic switch on the steering wheel toggles between four “e-maettino” hybrid-related drive modes (pictured below left), combining with the traditional hard-switchable “manettino” driving mode selector (below right) to deliver obsessive bartender levels of powerplant mixology. Because it wasn’t raining, and I wasn’t on a track – and because the manettino

settings aren’t actually news – I left the knob in “Sport” and forgot about it. Unless you’re a professional driver, so should you.

With that side of the steering wheel settled, I sampled from the e-maettino menu of eDrive, Hybrid, Performance and Qualify. In eDrive mode, the SF90 motivates itself solely under battery power. Because of the way the system is configured, this means that only the front wheels are being powered, making this a rather anomalous front-wheel-drive Ferrari. 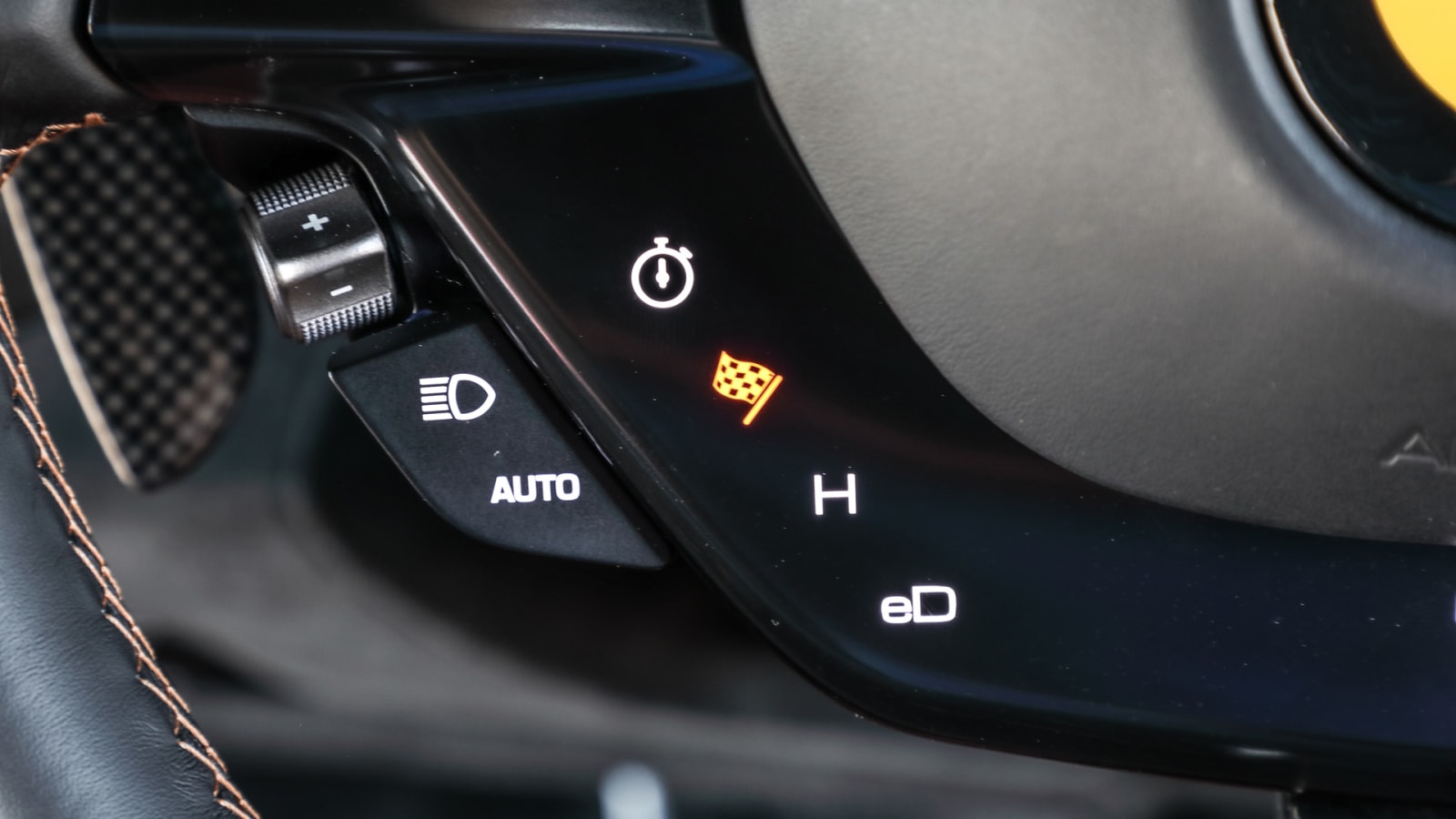 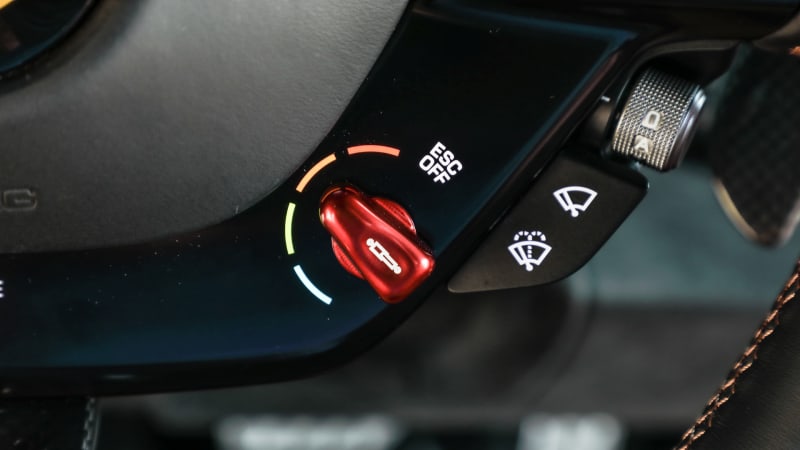 One can drive about 15 miles in this mode at speeds of up to around 85 mph, which I did, and it was eerie. Because of all the relatively limited twist generated by the front motors, the SF90 doesn’t exactly fly in this mode. And a Ferrari without euphonic engine noise is a bit like a giraffe without a long neck: interesting, but uncanny. Still, it’s fun to imagine using an outrageous Italian exotic car to do counterintuitive things like sneak up on valets, or back out of the driveway without antagonizing the neighbors. (Reverse, selectable with the silver, gated-shifter-inspired selector on the center console, uses electric power only.)

Hybrid mode maximizes efficiency, another somewhat oxymoronic circumstance for a Ferrari, particularly one that only achieves a combined EPA

rating of 18 mpg. But since the car was low on gas, and I started the drive on the highway, I tried it out. It doesn’t block out the V8, but it prioritizes using the electric motors, which means it definitely doesn’t make the most of its 1,000 metric horsepower. It also changes the shift mapping to search for higher gears whenever possible, and doesn’t drop down as readily, at least automatically. (The steering wheel-mounted paddles can do that at any time.) For whatever reason, the SF90 defaults to Hybrid mode whenever it’s started. And though it makes the car feel quite livable and compliant around town, who wants that from a $500,000 exotic? I drove it this way just as an experiment.

The other two choices are far more compelling. Performance mode keeps the V8 on full boil all the time, as well as allowing access to the battery. But in any moments when not absolutely flogging the car, it used some of this excess potency to charge up the battery. As you can imagine, this happens quite readily, especially on the highway, or even as I was making my way through the Los Angeles suburbs at the base of my most beloved mountain roadway.

My favorite e-maettino choice, and probably yours as well, is Qualify. This mode allowed access to full boost from the battery, as well as the complete majesty of the gasoline engine. In Qualify, the SF90 will accelerate from 0-60 in 2.5 seconds (on its way to a limited top speed of 211 mph), a figure that feels at once honest and thrilling. Once I made it to the base of Angeles Crest – a stretch of two-lane deserving of reverence if any is – Qualify remained engaged. There didn’t seem to be a reason to go back up the list. 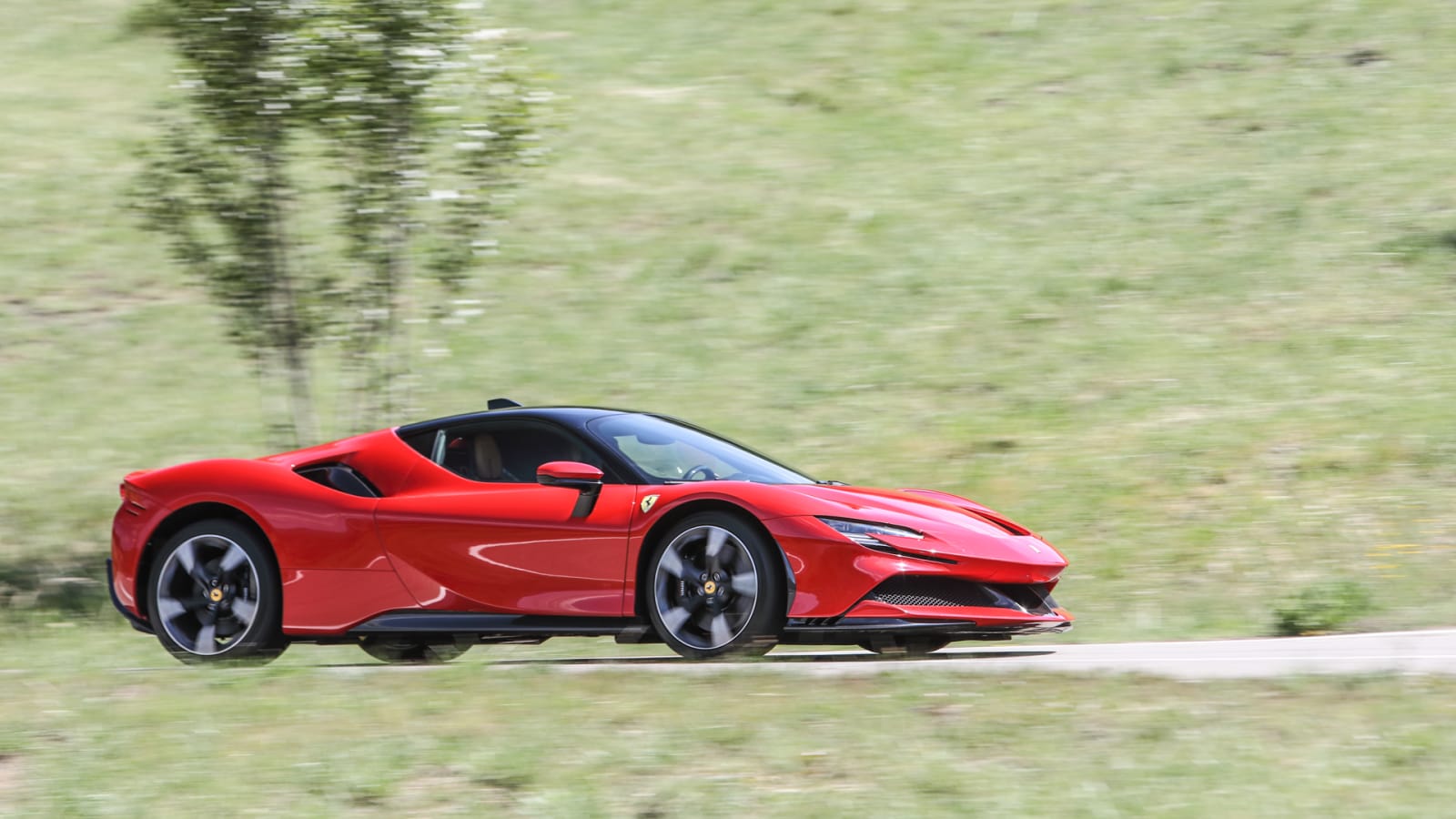 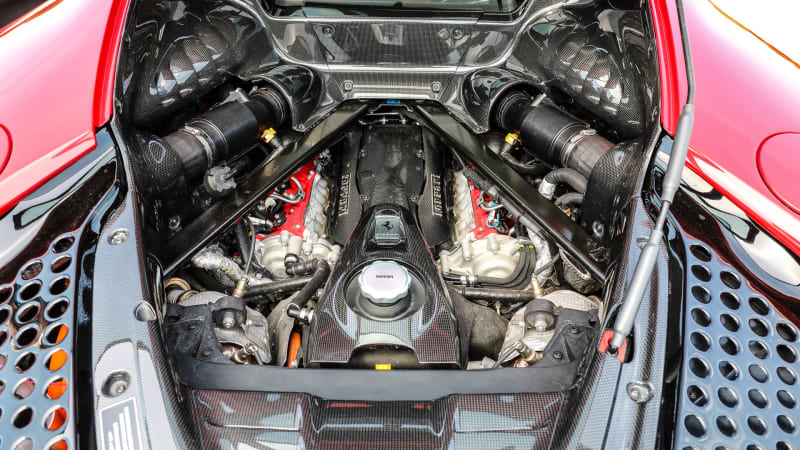 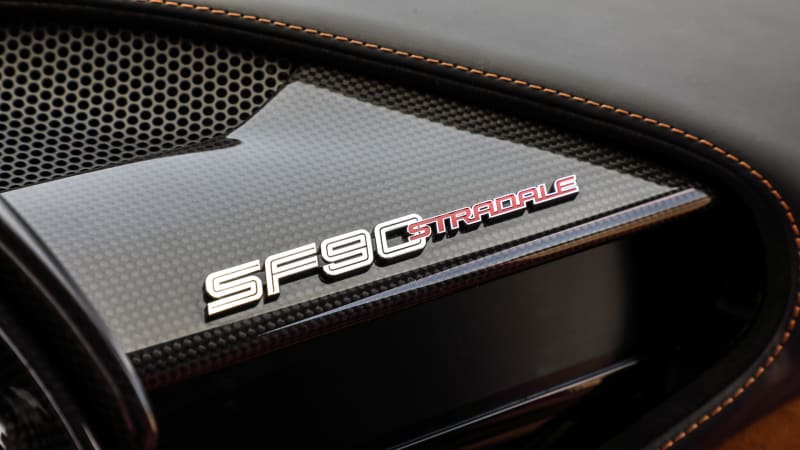 The SF90 is a revelation. Ferraris always make me feel like I’m far better at driving than I actually am. But taking a 1,000-metric-horsepower, half-million-dollar car out onto a public road had me feeling more than a bit bazorgt

. No problem. With its novel all-wheel-drive system – the first in a Ferrari sports car – the SF90 has more grip than my father-in-law the first time I came home with my boyfriend for the holidays. Credit RAC-e, a forced Italian acronym that roughly translates as “independent torque vectoring front wheels,” a system that delivers just the right traction up there at just the right moment. Get on the gas anywhere, and the car just sorts it. The brakes are unflappable and the steering perfectly weighted and communicative. In fact, for all the technology, one never feels removed from the experience, or victims of an intervention, as is the case with more technical supercars. You’re always completely engaged. Driving.

Some credit should also go to the Asetto Fiorano specification, which includes special Multimatic shocks, and pinesap-sticky Michelin Pilot Sport Cup 2 tires. It’s impossible to say if this package is worth its $56,200 price tag since we didn’t drive the “regular” SF90, but it probably was. That may not be the case for the other $140,000 of options on our tester, including the $11,812 carbon fiber rear diffuser, the $9,787 glossy carbon fiber engine cover, or the $928 colored seat belts. The $4,219 up-sell for Apple CarPlay is also egregious, but personally, I’d at least tick that box because I love CarPlay. Also, Ferrari’s new digital dash mirrors your phone right in the instrument panel, where the gauges usually go, which is neat.

Are there any quibbles? Besides the fact I didn’t get to keep the car forever? Not really. Clearly this is a very expensive car, optioned up to $700,000 in this spec, but even that almost seems like a bargain when compared to prior outrageous ultimate Ferraris like the gawkily hideous Enzo – which, adjusted for inflation would cost about $1 million today – especially given the SF90’s advanced capabilities, and its robust yet restrained good looks. It also serves as an excellent ambassador for the brand’s move toward complete electrification, something that is happening sooner rather than later, presaging the era of the exotic supercar that triumphs due to its lack of extroversion. If this is the future of Ferrari, and it is, I say bring it.

Aston Martin DB5 Vantage trio for sale, and they’re as rare as rare gets