Lewis Hamilton set the fastest time of opening practice at the Bahrain Grand Prix ahead of Mercedes teammate Valtteri Bottas. The champion-elect’s best time of 1m29.033s was 0.449s quicker than Bottas and almost a full second ahead of the next-best car, Sergio Perez’s Racing Point.

Midfield rival Carlos Sainz was just 0.18s further back for McLaren, the two teams split by only six points.

Pierre Gasly for followed for AlphaTauri, heading both drivers of the senior Red Bull Racing team with a 0.25s margin. Max Verstappen again led teammate Alex Albon, though by only 0.008s.

But the final classification is of only limited reliability for reading the rest of the weekend. For one, the first practice session run during the day whereas qualifying and the race are run after sunset. The 90-minute session was also typically sandy for the first day of running, and unexpectedly overcast and occasionally drizzly weather meant the track was not representative enough to paint a clear picture of performance.

Times were further distorted by mandating each driver run two sets of a Pirelli 2021-specification tire throughout Friday. All drivers conducted at least some experimental running, though Pirelli requires at least six timed laps on the new rubber in the more representative FP2 session later today.

Esteban Ocon was eighth for Renault after encountering what appeared to be suspension issues in the first half-hour of the session, his left-front wheel lifting off the ground over some curbs. Some quick work by his mechanics ensured he lost little running time. The Frenchman was separated from teammate Daniel Ricciardo in 10th by Racing Point’s Lance Stroll in ninth.

Ferrari drivers Charles Leclerc and Sebastian Vettel were closely matched at 1.5s adrift of Mercedes. Leclerc in particular was pessimistic over team radio of his car’s potential, though Ferrari wrote off its lackluster early form to experimenting with setup.

Grosjean came extremely close to ending his session early with a high-speed spin through Turn 7, the Frenchman saved only by a gravel patch in the run-off area. His new soft tires were flat-spotted down to the canvas in the slide, however, and he was forced to pit for replacements.

Antonio Giovinazzi was 16th in the sister Alfa Romeo, equipped with a new internal combustion engine, ahead of AlphaTauri’s Daniil Kvyat and McLaren’s Lando Norris.

Williams rookie Nicholas Latifi was 3.4s off the pace in 19th and only 0.3s ahead of his reserve driver teammate Roy Nissany, who commandeered George Russell’s car. 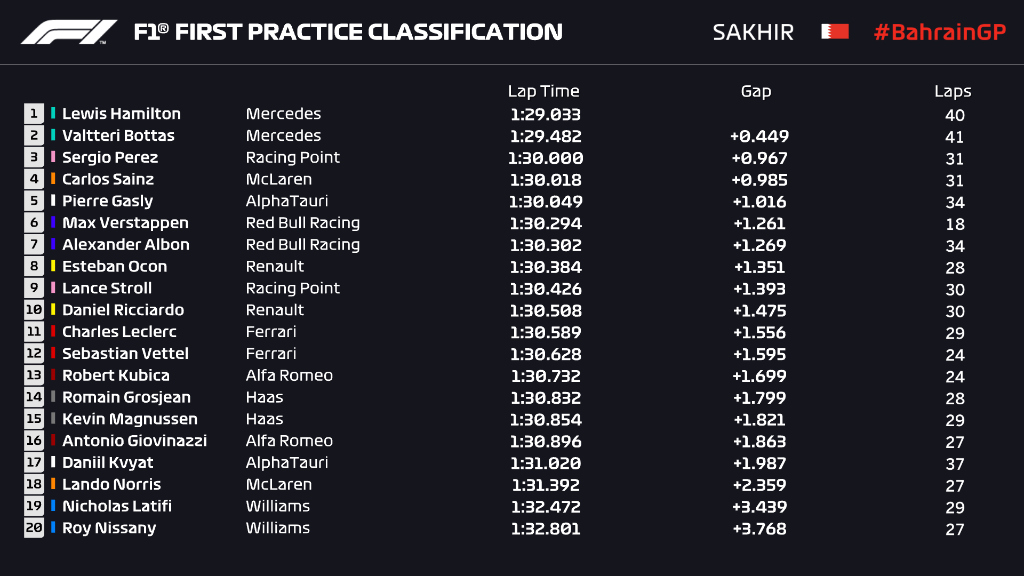 Correa set for racing return, 18 months on from Spa crash

The best-driving sedan Toyota already makes is an electric car