Lewis Hamilton ended Friday practice at the Bahrain Grand Prix as the fastest man in a night session interrupted by red flags for an Alex Albon crash.

Hamilton lowered his pre-sunset benchmark by less than a tenth to 1m28.971s with lap on fresh softs in the final 15 minutes. It was enough to beat Max Verstappen to top spot by 0.347s, although the Dutchman’s best lap was logged on medium tires after he had been unable make gains on the softs.

Valtteri Bottas was third, 0.018s behind Verstappen on his own soft tire run early in the evening.

However, the performance picture at the front is clouded somewhat by the disruption owing to Albon’s heavy crash halfway through the 90-minute session.

Albon ran wide exiting the last corner and spun around on the dust before slamming sideways into the barrier. Both right-hand corners were wiped from the car and both wings were broken, and a red flag was thrown to recover the wreckage.

The crash could prove particularly costly for the Thai driver, to whom Red Bull Racing is still yet to commit for 2021, though he might draw some confidence from matching teammate Verstappen in FP1.

The suspension lasted for almost a quarter of an hour, but only seconds after action resumed, race control was alerted to a stray dog on the circuit and was forced to halt proceedings again.

Only 26 minutes remained on the clock when practice finally got back underway. That meant Verstappen and Bottas abandoned attempts to find more single-lap performance from the soft tire and several other drivers ended the evening without having set a representative hot lap, preferring instead to use the remaining time on long-run simulation.

The disruption didn’t bother Sergio Perez, however, whose run on softs before the suspension yielded a time good enough for fourth place for Racing Point, less than half a second off the pace of the front-runners.

Daniel Ricciardo, who trails Perez by four points in the fight for fourth in the drivers standings, was only 0.059s shy of the Mexican in his Renault. Pierre Gasly was sixth for AlphaTauri a further tenth adrift after complaining early of being held up by a slow-moving Bottas as the Finn struggled on his 2021-spec Pirelli tires. These were again mandated to be used for at least six laps by the tire supplier after more extensive running had taken place in FP1.

Lando Norris led a tight midfield for McLaren. The Briton was almost 0.9s off the benchmark time but left Racing Point’s Lance Stroll and AlphaTauri’s Daniil Kvyat by 0.032s and 0.059s respectively.

Albon’s best time before his smash-up was good enough to keep him 10th at the end of the evening ahead of Renault’s Esteban Ocon.

Ferrari’s Sebastian Vettel finished 12th and 1.1s off the pace, putting two and three tenths respectively over his 2021 replacement, Carlos Sainz, and current teammate, Charles Leclerc, in 13th and 14th.

Kimi Raikkonen resumed his seat after Robert Kubica steered his car through FP1 to end the evening 17th ahead of Williams driver Nicholas Latifi and Haas’s Romain Grosjean.

George Russell — resuming the controls of his Williams machine after Roy Nissany borrowed it in the afternoon session — was last, 0.6s behind teammate Latifi and 2.6s off the pace. 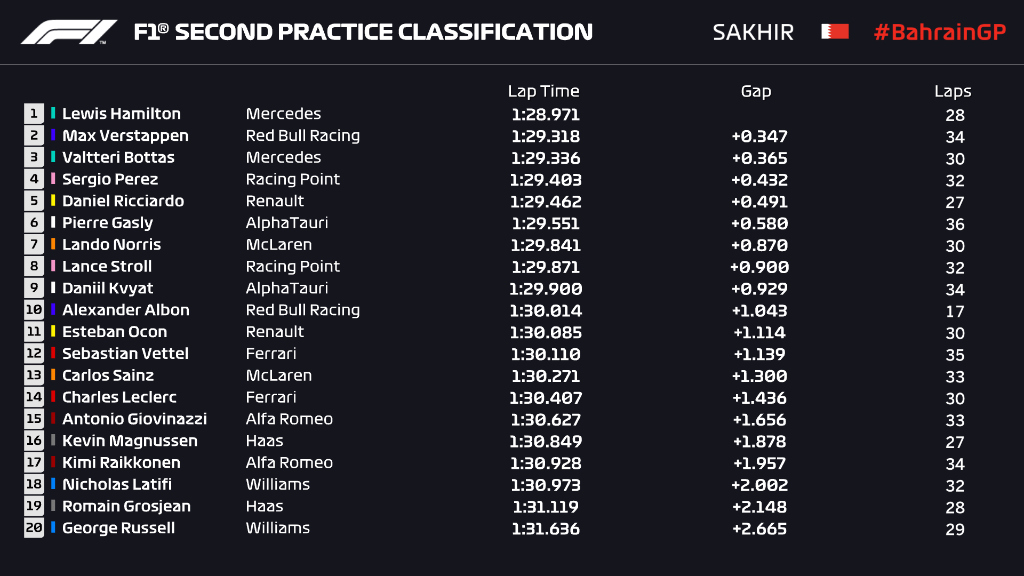