When the Hyundai HCD-15 Santa Cruz concept debuted at the 2015 Detroit auto show, it was eagerly received. Autoblog described it as “the compact pickup we’ve been waiting for.” As it turned out, we waited quite a while for it, but now that the production version is here as the 2022 Santa Cruz pickup, we thought it would be interesting to take a look back to see how it differs from the concept. 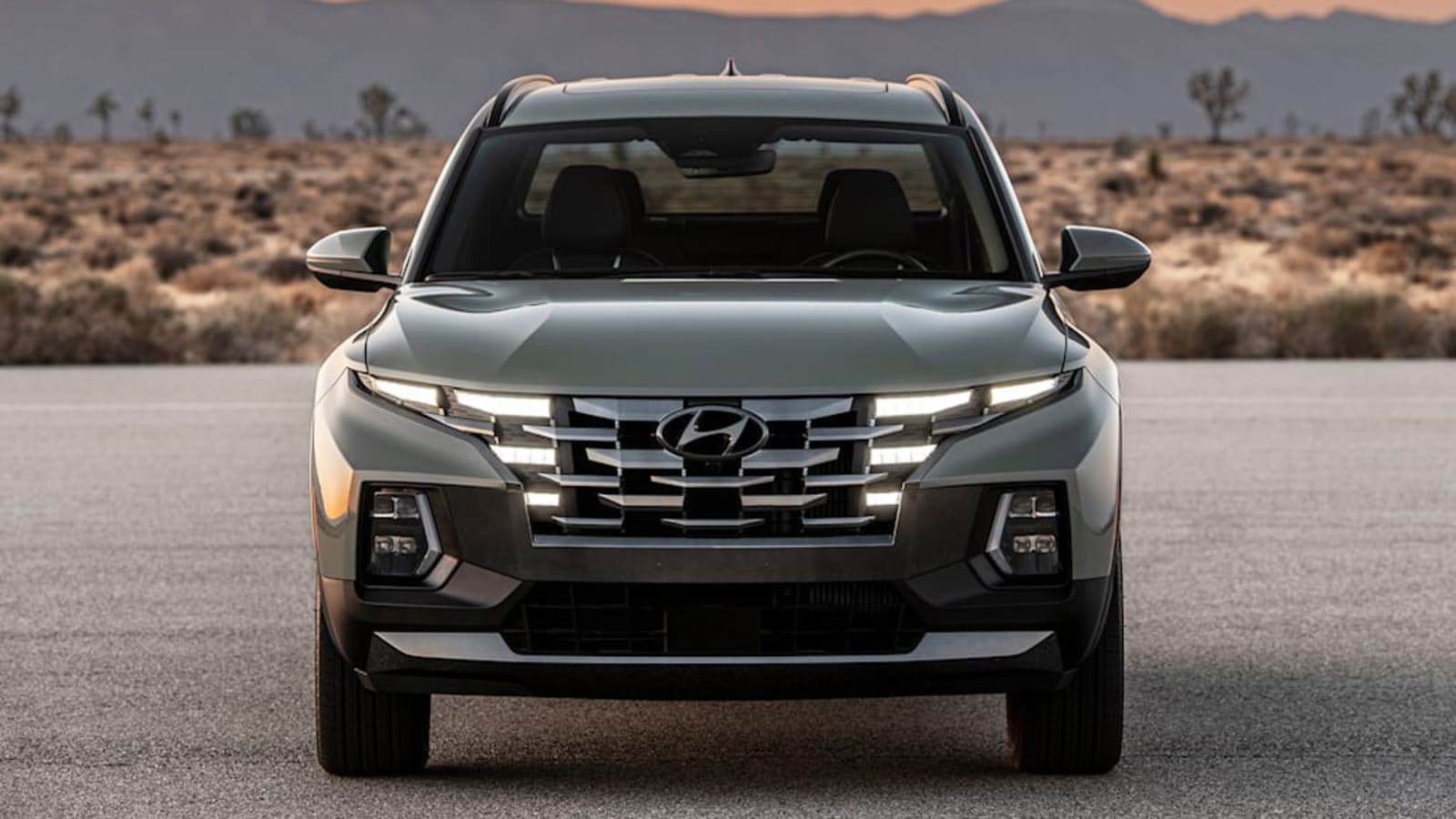 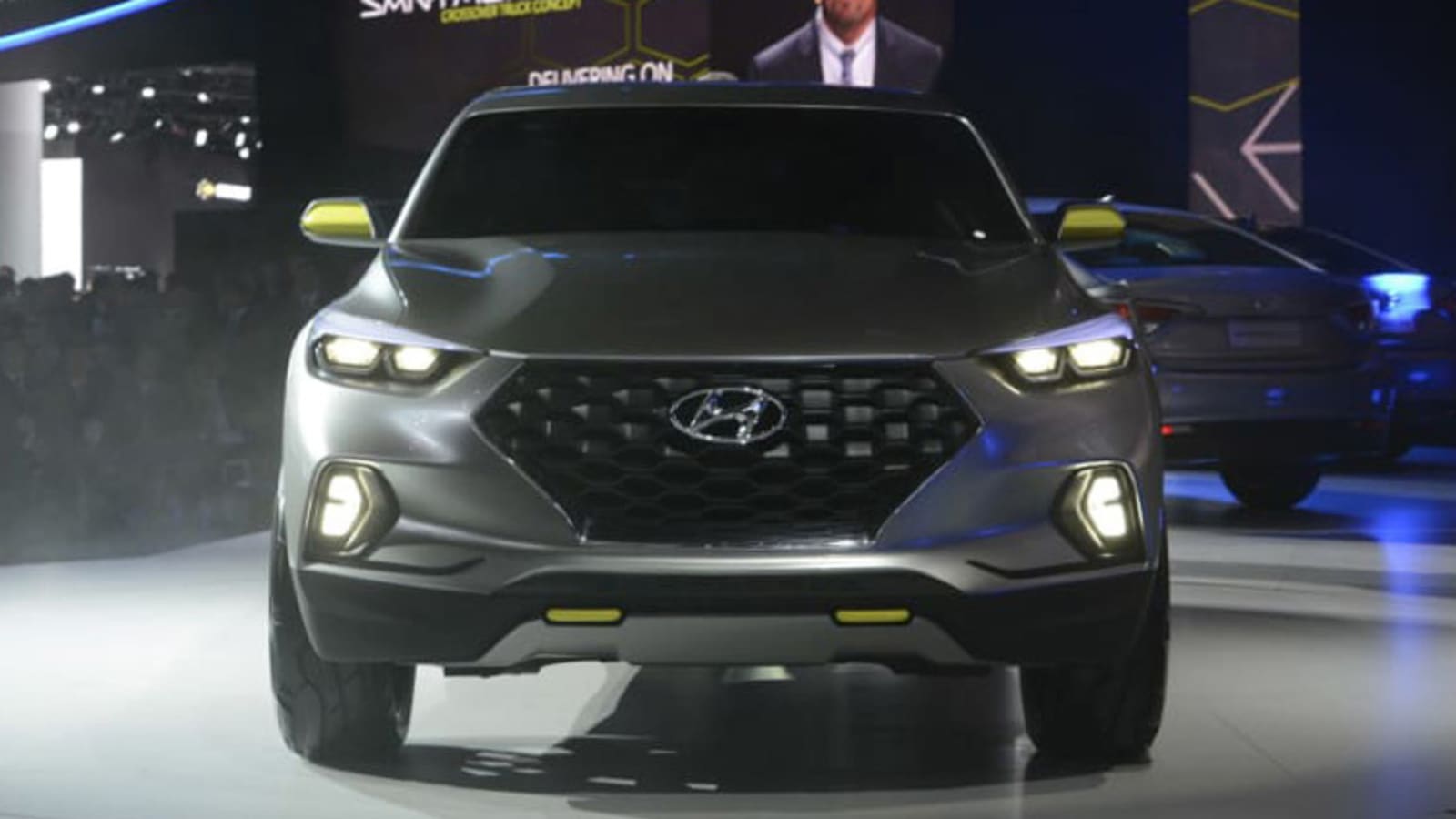 The HCD-15 (on the right) had somewhat generic front-end styling that was not lifted from any existing Hyundai production model. At the time of the concept’s debut, project lead John Krsteski, Manager at Hyundai Design America, said that a production version “could be based on something like a Tucson.” And that’s exactly what happened. Thus, the 2022 Santa Cruz borrows the front clip from the new Tucson, complete with its neat merging of LED lighting elements and grille design. From this view, we can also see an evolution in the vehicle’s proportions, with the squat roofline and wider appearance giving way to the production model’s taller greenhouse, with a windshield that again appears shared with the Tucson. 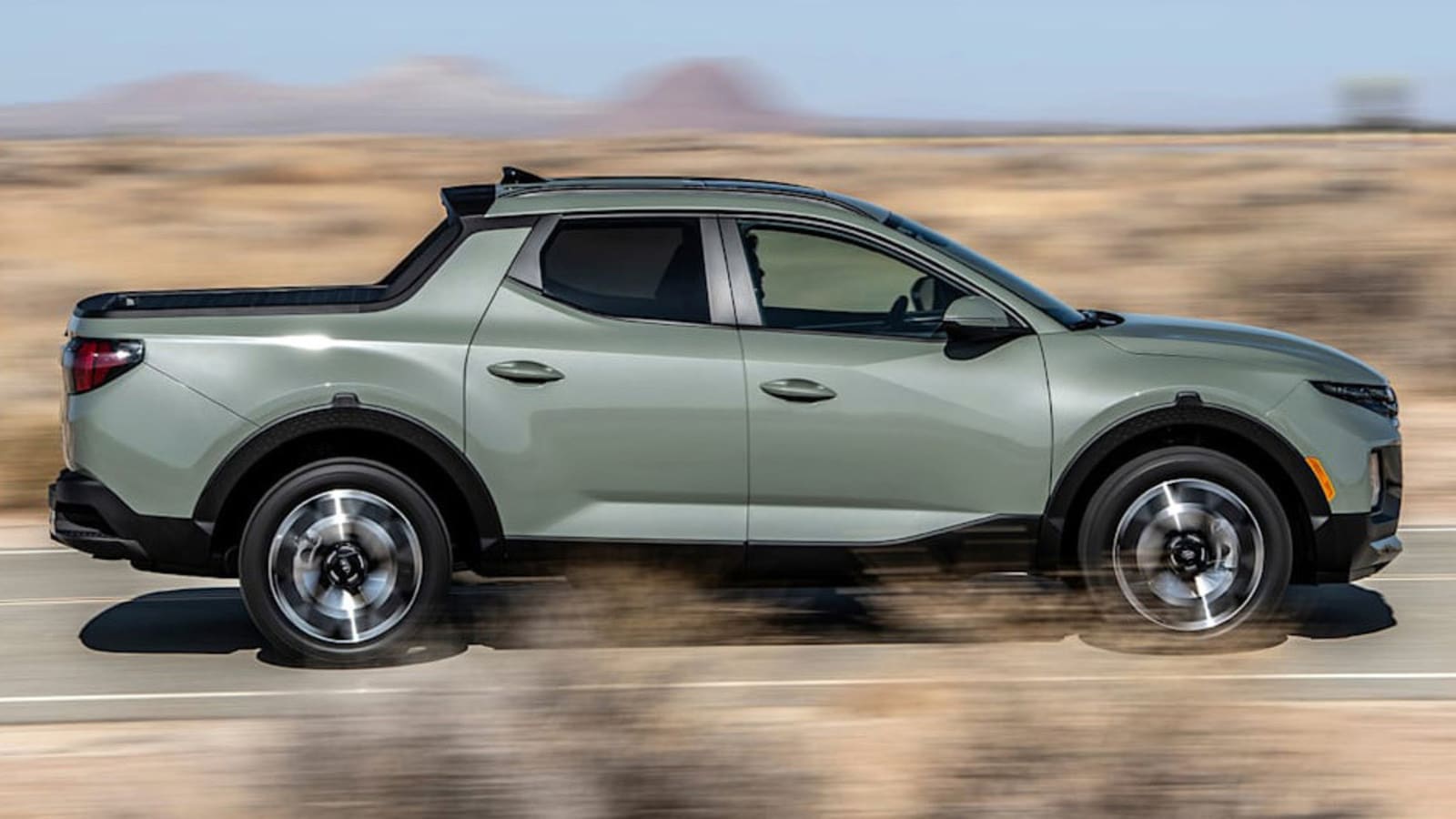 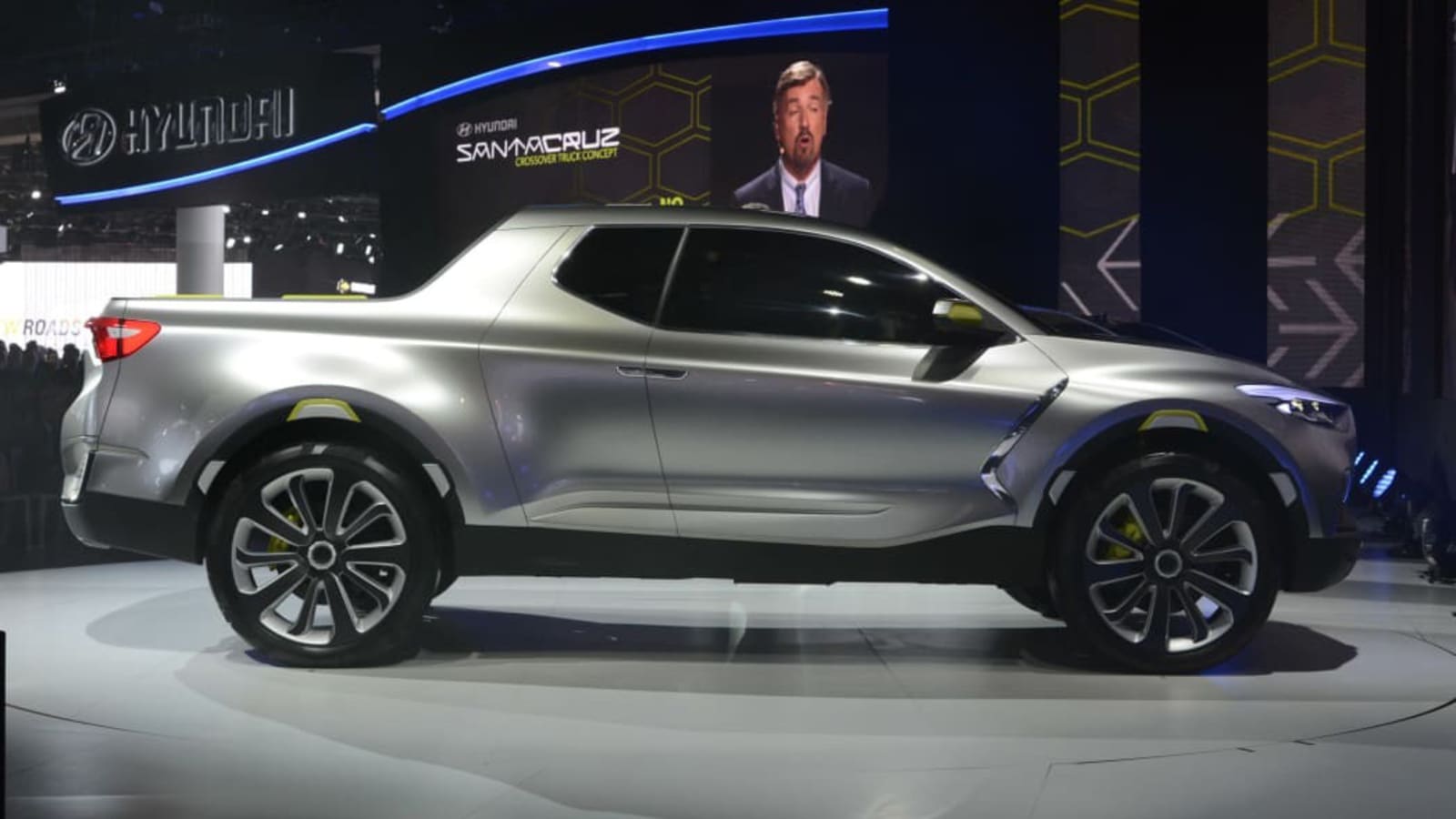 The biggest evolution in the Santa Cruz concept can be seen in the profile view. The HCD-15 (right) hewed to the extended-cab pickup norm with its door configuration of long front doors paired with half-sized, rear-hinged rear doors. But as that configuration has fallen in popularity in favor of genuine four-door crew-cab pickups, Hyundai wisely switched the Santa Cruz to four regular doors. The switch makes for a less-sporty appearance, perhaps, but far more practicality and, likely, better market acceptance.

The production Santa Cruz also adopts the new Tucson’s front-fender treatment, again part of the attempt to keep costs in line by using shared components. But it also retains much from the concept: the C-pillar treatment, the kick-up at the rear of the window line, the lower body styling, the location of the axles within the body and the plain round wheel arches. 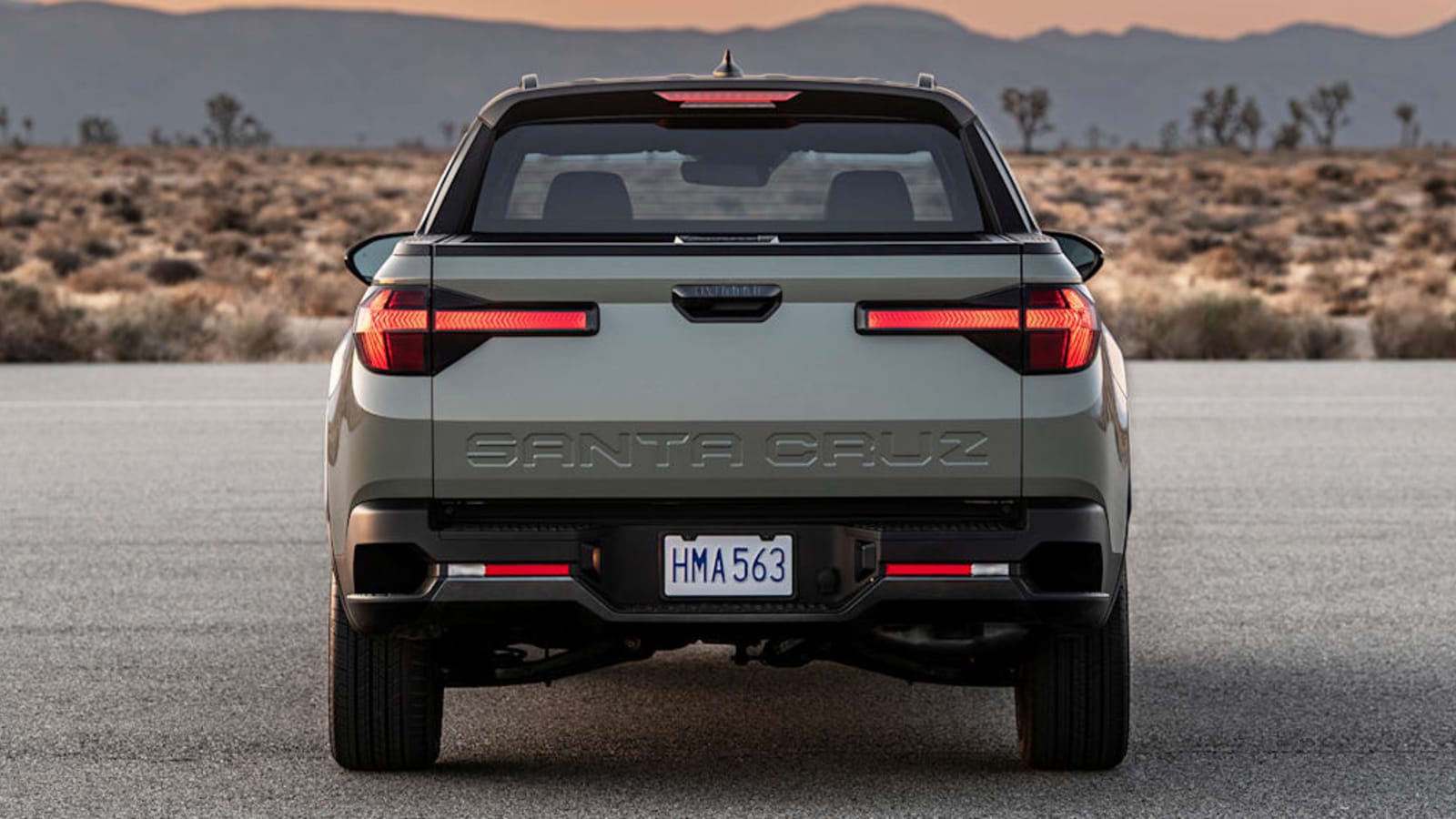 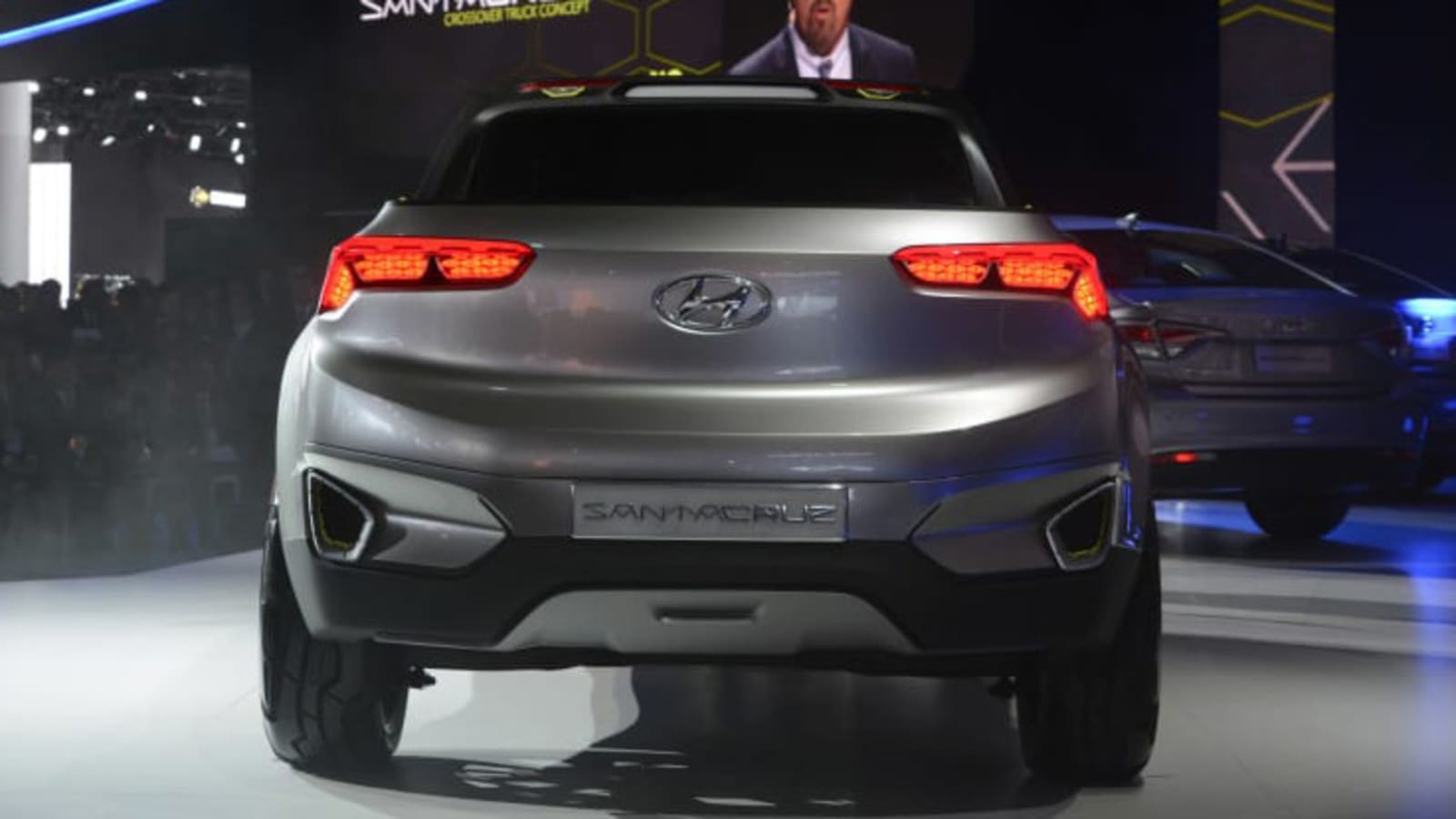 At the rear, the styling of the production Santa Cruz (left) has taken a turn toward conventional truck aesthetics with its less-rounded lower tailgate and squared-off, separate bumper. In place of the integrated exhaust outlets of the concept, we have chunky steps built into the ends of the bumper. The central Hyundai logo is gone, although the brand name is stamped into the tailgate handle. The tailgate’s surface treatment is similar, however, as is the taillight design.

Hyundai didn’t provide dimensions for the concept’s cargo bed, but it appears to be no bigger than that of the production truck, which is just over 4 feet long. For an added dose of utility, the concept floated the idea of a drawer-like bed extension. That would have been neat, but the production Santa Cruz settles for a conventional drop-down tailgate, albeit one that also can be opened partway to be at the same height as the wheel housings inside the bed.

The tailgate of the 2022 Santa Cruz also follows pickup convention with its stamped nameplate: SANTA CRUZ. The lettering is a beefy design that looks appropriate, but we’re partial to the more unusual lettering that was used in the concept, embossed into the front spoiler. Was it deemed too funky for production?

Overall, though the Santa Cruz concept of six years ago has been altered significantly in its journey from show car to showroom, the changes that have been made did not fundamentally alter the look and feel of the vehicle. Hyundai’s designers should be commended for maintaining the spirit of the captivating concept as they brought this product to an equally captivating reality.