Interest in electric trucks is high, but low cost and durability come first

While most Americans expect electric vehicles eventually to dominate the nation’s roadways, many have greeted the first battery-powered models with skepticism, expressing concerns about the potential costs and inconveniences of owning such vehicles, a Reuters/Ipsos poll showed.

Automakers have already recognized the challenge and said they plan to market future battery-powered models by touting their performance and long-term cost savings over environmental benefits.

Vehicle manufacturers need to win over more rural Americans and Republicans, with the survey showing those groups express less enthusiasm than others for electric vehicles.

Vehicle electrification, particularly of the most popular large, fuel-intensive light trucks and SUVs, has become a central part of U.S. efforts to reduce greenhouse gas emissions to combat climate change. In the Reuters/Ipsos national poll of around 1,005 adults from June 3-4, 67% of all respondents agreed in a bipartisan consensus that pickup trucks are the American way of life, underscoring the focus on electrifying those vehicles to reach climate goals.

Rural consumers in so-called red states or Republican strongholds are a key demographic for pickup trucks, the auto industry’s most profitable vehicle segment, challenging automakers to navigate an electric future without alienating those customers.

Several automakers, including Ford and General Motors, are planning to release all-electric trucks in the coming years. But no electric pickup truck is yet available, which means consumer attitudes about them are largely based on second-hand knowledge. 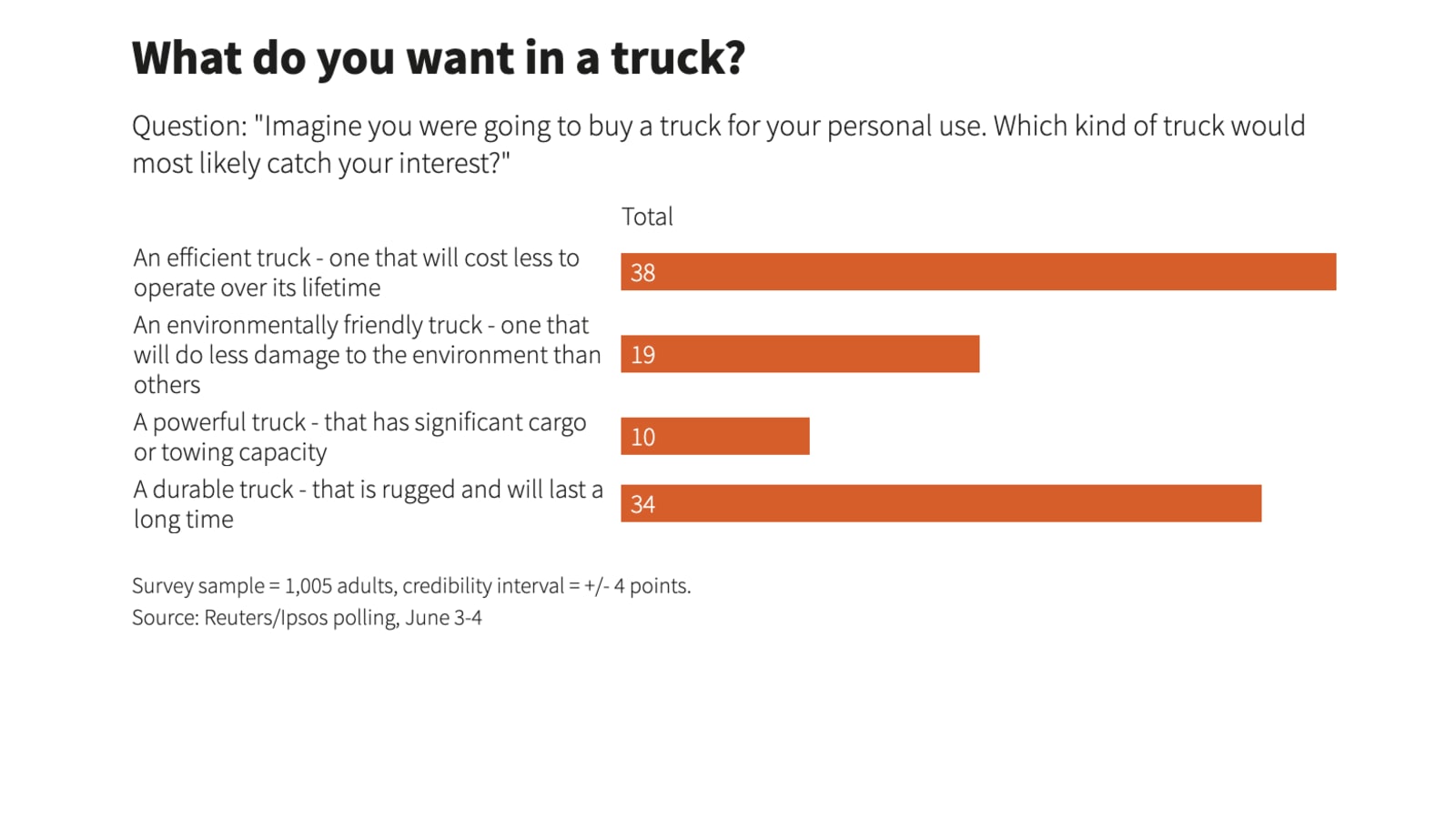 A majority of 65% agreed that electric vehicles are the future of the auto industry, the poll showed. While there were clear divisions along party lines — with 53% agreeing among Republicans, compared with 78% among Democrats — the issue is less partisan than other contentious U.S. political topics.

Nearly half of Americans — 46% — believe EVs

are not worth the cost, the survey showed, with opinions again reflecting a political divide. EVs have a higher sticker price than comparable gasoline models, largely due to costly batteries.

Jim Richman, a window installer in Austin, Texas, who owns a 2018 Ford F-150, said he is also concerned about the reliability of electric trucks and the hassle of charging them.

“I just want to know my truck is ready whenever I need it, and also for longer trips,” Richman said, echoing a sentiment among a majority of survey respondents who said EVs generally were inconvenient because of their need for charging.

The auto industry is trying to alleviate those concerns with technological innovations, including reductions in battery costs and longer driving ranges.

GM, which plans to start selling an all-electric version of its Hummer pickup by the end of next year, said more consumers will consider EVs as they become familiar with battery-powered vehicles. GM is also trying to emphasize economic benefits of going electric.

“We have a tremendous opportunity to help consumers understand that benefits of driving electric aren’t just related to the environmental benefits, but performance and capability that EVs offer,” said Darryll Harrison, a GM spokesman.

Researchers expect EVs to reach price parity with fuel-powered counterparts around 2030, and EVs also provide long-term cost savings due to lower maintenance costs and the lower cost per mile of refueling with electricity instead of gasoline.

Ford said its research had shown consumer demand for an e-truck, especially among younger truck owners. The company plans to release its all-electric F-150 Lightning truck next year, for which it has received some 100,000 reservations to date.

“By 2030 we expect 40% of our global mix to be fully electric and we’ll achieve that by electrifying our most popular name plates,” said Darren Palmer, Ford’s North America EV general manager.

Chris Sherman, general manager of a Ford dealership in rural Paris, Texas, said he has been surprised by the positive response to the Lightning so far.

“These are pretty much diehard gas and diesel pickup owners,” Sherman said. “Lot of people here are blue-collar, and they tow utility trailers. They want to know how much of a day’s work they can do with their truck.”

Sherman said he had so far received 10 reservations for the electric truck and that he fields up to 40 phone calls per day about it.

The Reuters/Ipsos poll was conducted online, in English, throughout the United States. It gathered responses from 1,005 adults, and the results have a credibility interval, a measure of precision, of about 4 percentage points.

OPINION: Baku sent a message about Perez – and about the value of experience