Mercedes-Benz will bring an armada of electric vehicles to the 2021 Munich Motor Show. One is the EQE, an E-Class-sized battery-powered sedan that will slot beneath the flagship EQS in the firm’s growing line-up of EVs.

It doesn’t require a degree in marketing to tell that the EQE will be to the E-Class what the EQS is to the S-Class. It will be positioned as an electric alternative to the E, and it will be characterized by short overhangs, a long wheelbase, and a more aerodynamic-looking design that will break with tradition. We haven’t seen its front end yet, but preview images released by Mercedes show an arched roof line that flows into a short back end with LED lights.

Inside, the EQE will receive design and tech features similar to the ones packed into the EQS. It will notably be available with the Hyperscreen layout that essentially turns the entire dashboard into a screen. It measures 56 inches long in the bigger EQS, and it’s powered by an eight-core CPU with 24 gigabytes of RAM. 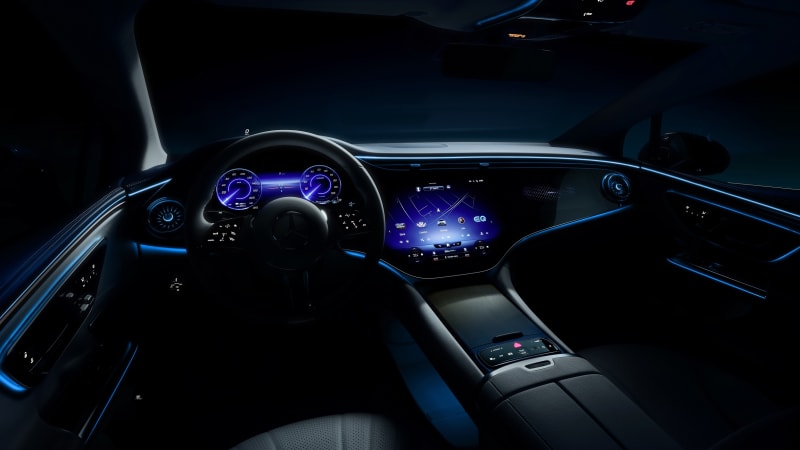 As we previously reported, the EQE could share its dual-motor powertrain with the EQC. It makes 402 horsepower and 561 pound-feet of torque in the crossover. More drivetrain options could join the lineup later in the production run; Mercedes notably hinted that AMG’s first electric car will break cover in Munich, and it could be EQE-based.

Maybach will get its chance to shine in Munich as well. Details aren’t available, but Mercedes noted one of the cars it’s bringing to the event is a concept that will illustrate how its ultra-luxury division will go electric. It will convey “a first, precise impression of how the 100-year tradition of ultimate automotive luxury can be carried forward into a new era,” according to a statement. We’ve been here before: the 2016 Vision Mercedes-Maybach 6 was also an EV.

All told, the Mercedes-Benz group (which bundles AMG, Maybach, and Smart) will unveil eight cars at the Munich show, including five EVs and one hybrid. The latter is likely the 800-plus-horsepower GT 73e we’ve heard about for years. The armored version of the latest S-Class and the rugged C-Class All-Terrain are also Munich-bound.

The 2021 Munich Motor Show (which replaces Frankfurt on the calendar) will open its doors to the press on September 6. More information about Mercedes-Benz’s unveilings will be released in the coming weeks.