LONDON/MADRID — Want a cheap used car to nip around town without running the gauntlet of coronavirus on public transport? Welcome to Pandemic Motors, we have just what you need.

Across Europe, people are snapping up old bangers, clunkers, Klapperkasten, tacots and catorci, desperate to avoid buses and trains but wary of splashing out on a shiny new motor in uncertain economic times.

“Public transportation is terrific here, but with the COVID and all that, it’s better to avoid it,” said Robert Perez, who recently moved to Spain’s capital Madrid from Argentina.

firm that has opened four new dealerships since the lockdown due to soaring demand.

Data provided to Reuters by research firm IHS Markit and online car market AutoScout24 showed there has been a marked upward shift in registrations of older cars across Europe, as well as a spike in internet searches for aging vehicles.

The surge in interest in used cars is neither good news for struggling mass transit networks nor the environment as dirty old cars appear to be more in demand than new electric vehicles.

In the longer term, however, the shift away from public transport towards “individual mobility” in the pandemic era is expected to help carmakers, hit by a 27% slump in new vehicle

At Nawaie Motoring’s crammed lot in the west London suburb of Hayes, general manager Ameen Sultani points out the older cars selling for under 3,000 pounds ($3,985) that are in demand.

He said prices for the cars, mostly over a decade old, have jumped by 25% as buyers who used to take trains and buses look for affordable alternatives.

“Anything under 3,000 pounds has sold very quickly and is very hard to replace in our inventory because everyone is chasing the same vehicles,” Sultani told Reuters. “Most of them have bought because they wanted to avoid public transport.” 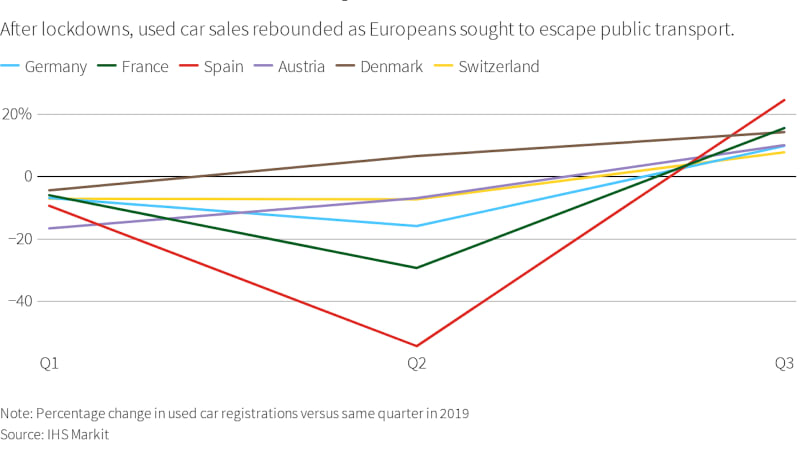 in the United States, Europe and especially China in recent months has helped major automakers recover to some extent from the financial blows pandemic lockdowns delivered in the spring.

But an analysis of car registration data in France, Germany, Italy, Spain, Switzerland and the United Kingdom conducted for Reuters by IHS Markit also shows there’s a significant shift toward older, used vehicles.

“It’s fair to say in the time of corona that the amount of vehicles older than 15 years has increased versus prior years,” said Bjoern Huetter, an associate product director at IHS.

There was an even bigger jump in Spain, with used car registrations up nearly 25%, according to the IHS analysis Cristian Lopez, 34, is another buyer in Spain who went for the cheaper second-hand option, partly thanks to having saved some money during the country’s strict lockdown.

“Enough to buy a cheap car in cash!” Lopez said.

Furloughed from his job at a catering company, he went back to school to study tourism management. This month, he bought a gray 2005 Renault Clio for 3,600 euros to get to classes from his home in the Madrid suburb of Vicalvaro.

Vehicle sales portal Sumauto, part of Spanish media company Vocento SA, told Reuters that sales of cars over 20 years old jumped 25% in Spain from June to October, while those over 15 years old rose 16%. 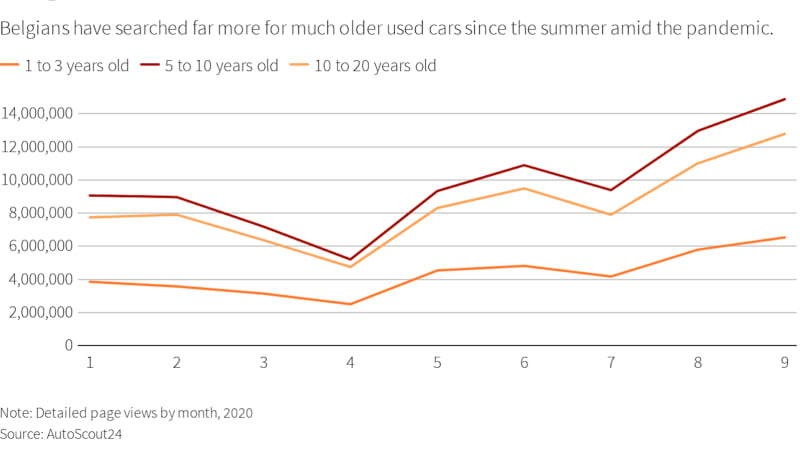 In an analysis for Reuters, online car market AutoScout24, which serves Austria, Belgium, Germany, Italy and the Netherlands, said internet searches for older cars had spiked since the summer.

The data showed, for instance, that in July through September, online searches for vehicles over 20 years old jumped 80% in France, 77% in the Netherlands and 59% in Belgium.

AutoScout24 Chief Executive Edgar Berger said that while “individual mobility” had become more important to consumers in these markets because of the pandemic, they had also become more cautious because of economic uncertainty.

But buyers are still shying away from second-hand electric vehicles, according to used car dealer OcasionPlus. Of the 2,800 vehicles it currently has on sale, only six are electric.

“People are wary about batteries’ performance in the long run and are reluctant to invest in the charging cabling for a second-hand car,” marketing chief Fernando Rodriguez said.

Besides the potential setback to ambitious European targets for cutting carbon emissions, there are other, longer-term ramifications from keeping very old cars on the road longer.

Older vehicles with fewer safety features might cause more accidents and lead to higher premiums, insurers said, though that will take time to show up in statistics.

And the shift to cars is already hitting public transport.

The number of people using public transport in Spain fell 92% in April from the same month in 2019 and was still 44% lower in September, several months after national lockdown restrictions were eased.

Britain’s pandemic car use versus rail: 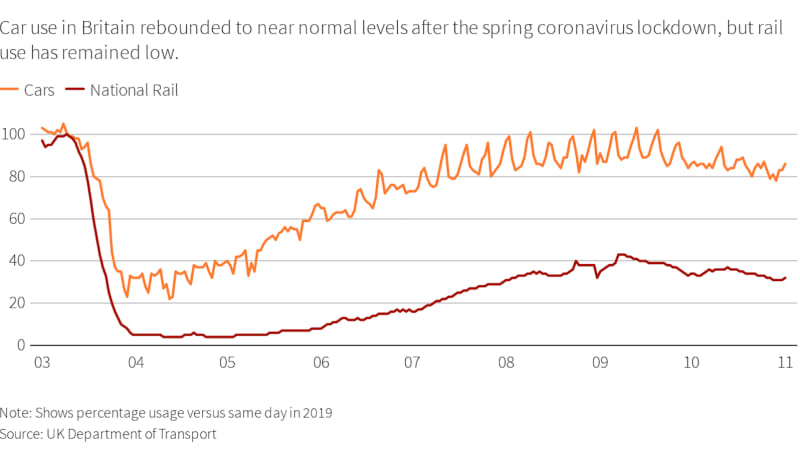 In Britain, before the country’s latest lockdown began at the beginning of November, rail usage was about a third of 2019 levels, while personal car usage was close to 90%.

Germany and France have also bailed out their state-owned railways.

Greenpeace political campaigner Sam Chetan-Welsh said the shift away from public transport was a greater environmental concern than having older cars on the road because higher sales of new, larger sports-utility vehicles have left vehicle emissions relatively flat anyway.

“Governments need to do everything they can to reduce traffic on the road,” Chetan-Welsh said. “That includes giving people the confidence to get back on public transport safely.”