One of the most desirable new vehicles for sale right now is the Suzuki Jimny. The compact 4×4 was developed with a “less is more” philosophy, giving off-roaders everything they need to traverse harsh terrain, but with an affordable price and none of the luxo-fluff that many modern trucks come with. Now, Suzuki has announced an even more bare-bones Jimny Lite that delivers exactly what four-wheelers want in a no-nonsense, affordable package.

First and foremost, the Jimny Lite will still offer the same 1.5-liter four-cylinder engine producing 101 horsepower and 96 pound-feet of torque, along with the same low-range four-wheel-drive and ladder frame construction that make the original such a great little off-roading machine. However, while regular Jimnys have a four-speed automatic option, the Jimny Lite will be offered with only one transmission choice, a five-speed manual.

Rather than alloys, the rig — called the “Diet Jimny” in an image filename on Suzuki Australia’s website — will come with 15-inch steel wheels, tougher and cheaper than aluminum. Other exterior changes include halogen headlights rather than LED projectors, deleted fog lamps, and the subtle substitute of plastic textured side mirrors instead of the current gloss black units.

Cabin wise, the infotainment touchscreen that includes satellite navigation as standard will be replaced with a old-school in-dash radio and CD player. Bluetooth is still included, though, so you can still stream navigation and digital music from your phone. Additionally, the digital climate controls will be chucked for a manually operated system. 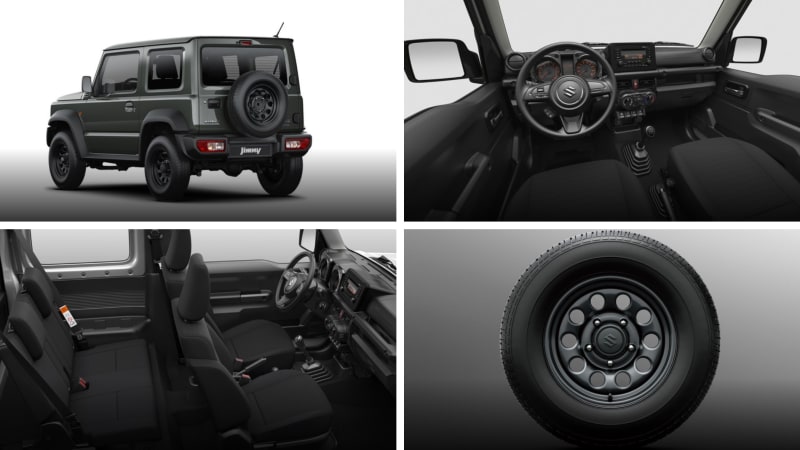 This sounds like a dream come true for enthusiasts, who tend to enjoy using their own aftermarket wheels, auxiliary lighting, and stereo options. Though pricing hasn’t been announced, the Suzuki Jimny Lite will presumably be even more affordable, giving wrenchers a blank canvas to build their own rigs without paying up front for stuff they don’t need. It’s like when Toyota offered the 86 RC, a steel-wheeled, unpainted-bumper version of the 86 for race car builds.

Unfortunately, like the 86 RC, the Jimny’s sale area does not include the United States. The Jimny is available in its native Japan, south of our border, in Europe, Australia, as well as several other markets around the world. We don’t see it coming stateside anytime soon, but that hasn’t stopped us from longing for a Jimny from afar. With the Jimny Lite, our desire grows even stronger.