Autoblog may receive a share from purchases made via links on this page. Pricing and availability are subject to change. No donation or payment necessary to enter or win this sweepstakes. See official rules on Omaze.

Starting on Black Friday, anyone who enters any experience Nov 27-29th will be offered 300 extra entries offer and will automatically be entered to win one of ten $500 Amazon gift cards. Winning this sweepstakes would be the best Black Friday deal you’ll ever find.

I have more than a few dream cars, as most of us here at Autoblog do, but if I had to narrow it down I’d say a first-generation Ford Mustang GT350, a Toyota Land Cruiser 70-Series, and a 2005 Ford GT are near or at the top of the list. I recall seeing the latter for the first time in a dealership near my house in metro Detroit when I was in high school. That car had just a few thous and miles on the odometer and was nearly perfect (the fact that it shared parts with the same year Ford Focus

Advertisement
sedan knocks it down just a bit in my book). The 2005 Ford GT that Omaze is currently giving away has even fewer miles, less than 1,500, and still looks as good as the day it was made. 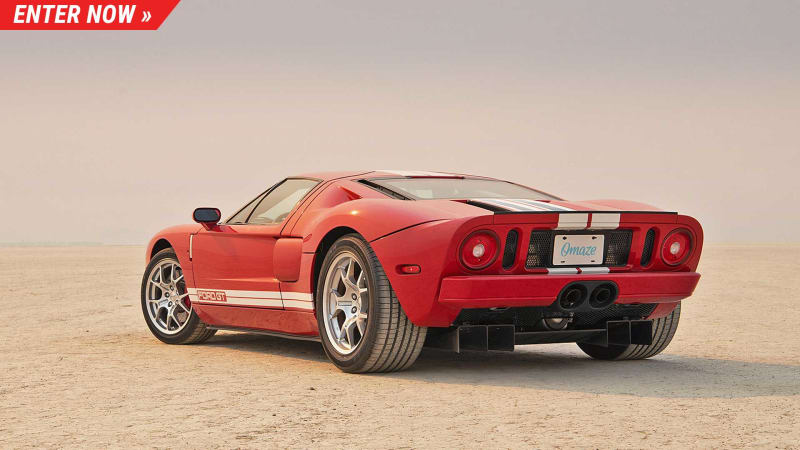 This generation Ford GT was made for only two years, and was modeled after (and looks almost exactly like) the Ford GT40, a famed race car that took the entire podium at Le Mans in 1966, ending Ferrari’s reign. If you haven’t seen it yet, check out the film “Ford vs Ferrari“, and make sure your surround sound is on.

This particular example is Mark IV Red w/ White Racing Stripes, powered by a V8 that makes 550 horsepower, 505 lb-ft of torque, will hit 60 miles per hour from a standstill in only 3.3 seconds and will hit speeds of over 200 miles per hour. These rare Fords have also been steadily increasing in price, so while their current value hovers around $300,000, that number will likely increase as time goes on.

As if all of that wasn’t enough, Omaze is covering the taxes and delivery fees, as well as throwing in $20,000 in cash, for you to spend however you’d like.

The best part is that every donation supports the Petersen Automotive Museum, which, according to Omaze “explores and presents the history of the automobile and its impact on global life and culture, using Los Angeles as the prime example. The museum acts as a progressive center for automotive research and collecting, which includes reaching underserved communities. Your generosity will help the museum extend its education programs both onsite and online and aid the museum in the development of new exhibitions, community events and preservation activities.”

Oh, and don’t forget, starting on Black Friday, anyone who enters any experience Nov 27-29th will be offered 300 extra entries offer and automatically be entered to win one of ten $500 Amazon gift cards. Winning this sweepstakes would be the best Black Friday deal you’ll ever find.

Toyota Supra funny car is all business with a possible 11,000 horsepower