Volkswagen is celebrating the 75th anniversary of one of the most important dates in its history. Against all odds, it launched series production of the Type 1 — which we know as the Beetle — on December 27, 1945.

Prior to that date, the factory in Wolfsburg, Germany, and the Beetle both faced a grim future. Although the car was developed before World War II, only 630 units were built during the conflict as the factory shifted its attention to the war effort. It was consequently bombed by Allied forces several times during 1944. When peace returned, it would have been much easier to level the factory, scrap the Beetle, and do something else with the site.

That’s almost what happened, but the British government — which controlled the zone Wolfsburg was in after the war — desperately needed vehicles for its personnel to get around. After examining an early Beetle, officials ordered a batch of 20,000 cars from the factory in August 1945, and they doubled that number several weeks later. Initially, the goal was to produce 1,000 cars a month, meaning filling the order should have taken over three years. It likely wasn’t lost on officials that the sizable order would keep workers in a job until at least 1948. Launching production was easier said than done; raw materials and fuel were difficult to come by, and finding ways to house and feed the workers was a logistical nightmare. 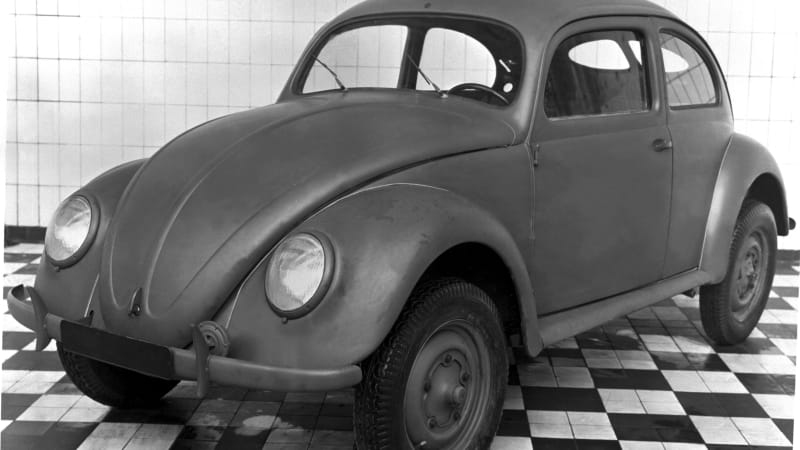 Despite the hurdles, Volkswagen launched series production of the Type 1 two days after Christmas in 1945, and it built a total of 55 cars before December 31. Cars were largely assembled by hand, so the factory didn’t reach the 1,000-cars-per-month goal until early 1946. At the time, exceeding that number wasn’t possible due to the aforementioned shortages, but production increased significantly as the situation improved. Introducing the Beetle to the United States in 1949 dramatically increased its popularity, and it helped turn the model into an icon.

Wolfsburg wasn’t the only factory that built the Beetle; production also took place in several other German plants, including one in Audi’s

hometown of Ingolstadt, in Australia, in Brazil, in Mexico, and in South Africa, among other countries. Your author owns a 1972 model built in Belgium. While the model was gradually replaced by the first-generation Golf in Europe and in North America, it remained relatively popular in other global markets, and it didn’t retire until July 30, 2003. The last of the original-style Beetles was built in Mexico, where VW also produced the 1998-2010 New Beetle, and the 2012-2019 Beetle (News Editor Joel Stocksdale owns one of the latter ). All told, 21,529,464 units were built during a 56-year run, a figure that’s nothing short of exceptional when you consider that the first one looked an awful lot like the last one. Volkswagen made thousands of changes to the car, but it never altered the basic design or tweaked the mechanical layout.