What it’s like to drive a brand-new, 92-year-old Bentley Blower

“Vivid” doesn’t even begin to describe this; neither does “damn cold.” The throttle is pinned to the firewall, the needles behind the glass in the dashboard’s 10 dials are twitching and dancing, the supercharger boost gauge is nailed to the lock stop, and the dark-green scuttle is shuddering with the ripples of the concrete banking. Think World War II airplane over the storm-tossed North Atlantic – I even slid a picture of my wife into my breast pocket this morning …

I’d be grinning, but the freezing blast over the leather-strapped bonnet gives me a rictus grimace. There’s a lot to do in this 92-year-old supercharged Bentley as its fish-tail exhaust blares seal-honk indifference at a shoal of insignificant super cars fluttering in its wake; at 100 mph this is motoring at its zenith.

They don’t make ‘em like they used to and I used to think that was indubitably true of this car: Sir Henry ‘Tim’ Birkin’s Blower Bentley. This was his favorite out of the five Blowers built at the Welwyn factory between 1929 and 1930. It was bank rolled by Dorothy Paget, the Whitney family heiress, and serial race-horse owner and gambler.

How famous? This car, known as Number Two, was entered in the 1930 Le Mans 24-hour race. Birkin drove it like a bat out of hell in the initial stages of the race with the tacit approval of the Bentley factory, which had entered a team of “6 1/2 litre” naturally aspirated cars and was looking for its fourth-consecutive Le Mans victory and the marque’s fifth overall. 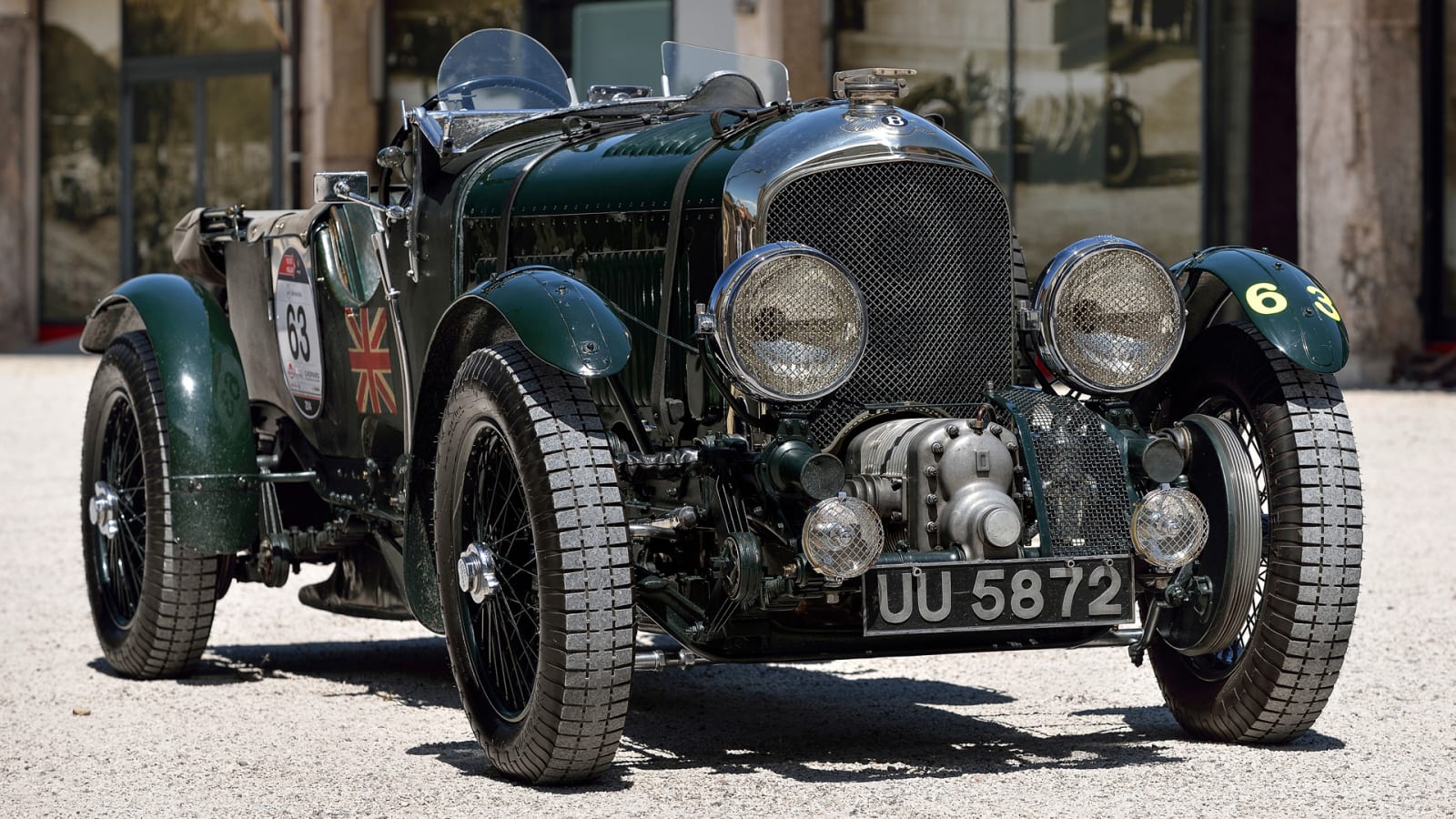 They used Birkin and this lovely old machine as “the hare,” testing the potential and reliability of the astonishing Mercedes-Benz works supercharged, 7-liter SSK driven by Rudolf ‘Rudi’ Caracciola (ironically Paget also owned one of these rare and exotic beasts). The fast and courageous Birkin was sent out to poke a stick at the German ace – it was like poking a wasps’ nest. Twice Birkin overtook Caracciola at over 120 mph at the end of the Mulsanne/Hunaudieres straight, with one wheel on the grass and the rear tire down to its canvas. By all accounts Caracciola was so startled simply because he couldn’t believe that anyone would be actually overtaking him.

Legend has it that in pursuing Birkin, Rudi Caracciola damaged the engine by over using the supercharger, which could be clutched in and out, but the truth is more nuanced. Birkin drove his car so hard he twice lost a tire’s tread and had to pit early. He continued the assault on the Mercedes, but other Bentleys ultimately took up the challenge. After a thrilling battle into the night, the Mercedes’ lights started to flicker and die as a wire worked lose from the dynamo and with a flattened battery, on its 85th lap, the big car was eventually retired. The two Blower Bentleys, including the Birkin car, were also retired with engine problems, at tea time the following day, it was the Woolf Barnato/Glen Kidston Bentley 6 1/2 litre that took the checkered flag for Bentley’s fifth Le Mans win.

So, did Birkin make a difference? Almost certainly, though perhaps not quite as much as the stories would have it.

What a ripping yarn. It so inspired Ian Fleming that he gave his super spy hero James Bond a Blower Bentley in his books. Finished in elephant’s-breath grey, Bond crashes his Blower in an ambush set by villain Hugo Drax in Moonraker (1955). In more modern times, Bentley wanted to call one of its colors elephant’s-breath grey in tribute, but was warned that American buyers might think it was actually painted with real elephants.

This car might look like Birkin’s Blower, but it’s actually a modern replica. A copy. A fake. It’s the engineering prototype for a batch of 12 £1.5 million ‘continuation’ cars reverse-engineered by VW-owned Bentley Motors, from the original Number Two Birkin Blower pictured above in all its genuine glory, which it owns.

Controversial? You betcha. In May 2020, a group of high-profile owners of some of the original 55 Blower Bentleys signed a letter of protest to Bentley CEO Adrian Hallmark. You see, back in the 1930s, the Bentley factory built the other 50 Blowers to comply with the racing rules of the time.

“We urge you to please not squander time, funding, energy and the Bentley brand’s reputation upon the recently-announced batch of 12 facsimile cars, cars that would serve only to dilute that special admiration and awe that can only come from viewing and embracing the genuine article.  To do otherwise would be to pervert a glorious history,” wrote the signatories including Ralph Lauren, Lord Bamford, Peter Livanos, Evert Louwman and William ‘Chip’ Connor.

It made no difference. Bentley had already sold all 12 and what was effectively a new/old car program had commenced managed by Ben Linde, the charming project manager (pictured below, left, with me). 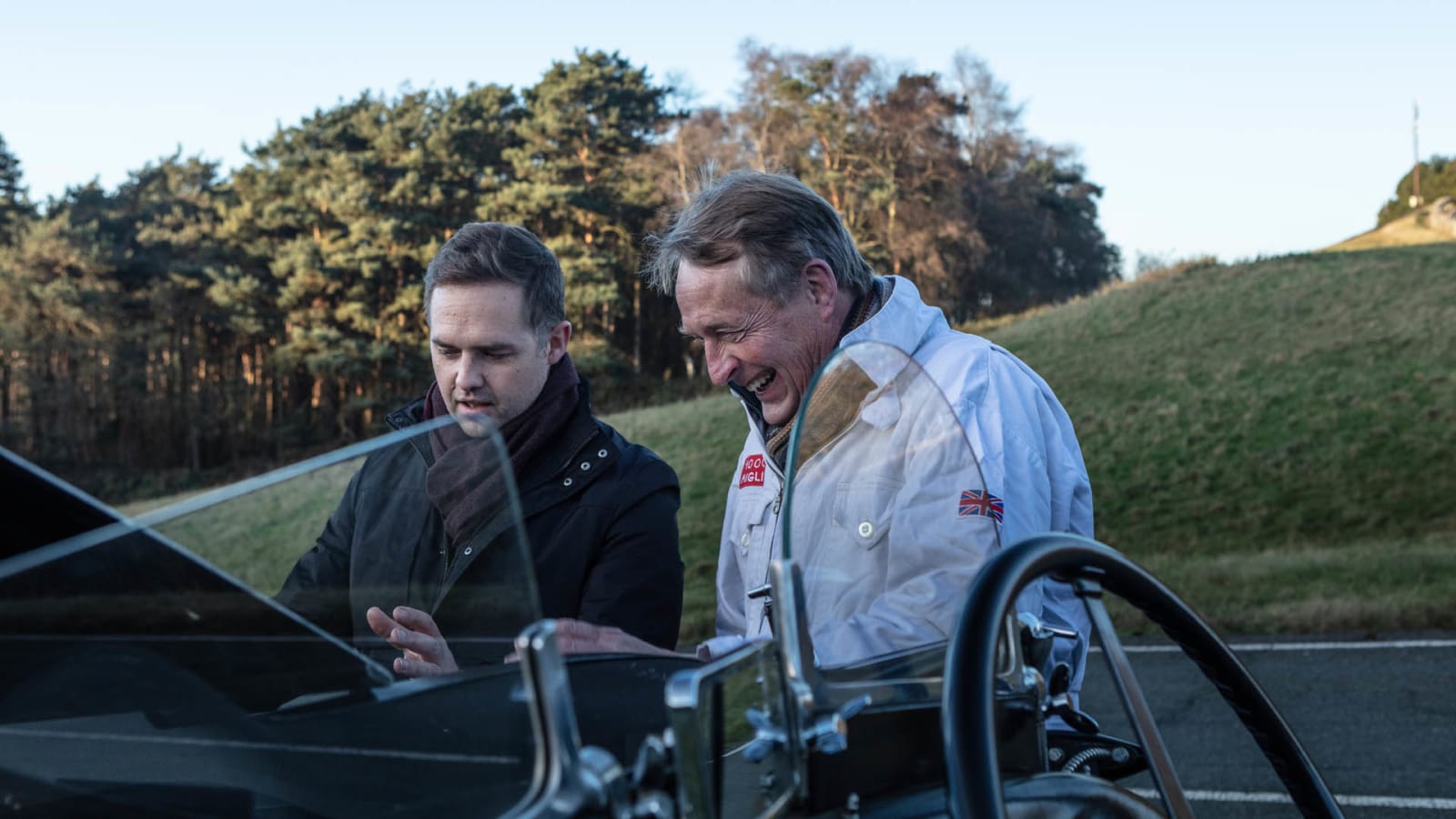 He explains to me that they left out harmful materials such as asbestos and lead in the construction and introduced a couple of updates such as an electric fuel pump and better location for the rear fuel tank. All in all, however, this is a copy of the car that Birkin ran across to at Le Mans on June 21, 1930, complete with its hastily widened headlamp mountings and bonnet full of holes to get rid of the phenomenal heat from the boosted monobloc engine running on benzene. It could be said to be even better, since when they digitally mapped the original’s chassis, they found it was kinked, front and rear from long-forgotten shunts.

Bentley calls it a ‘continuation car’, which has become car makers’ accepted nomenclature when they plunder their back catalogues and produce versions of their most famous models. Jaguar (with recreations of the C-Type, D-Type, XKSS and Lightweight E-Type) and Aston Martin (DB4 GT, DB4 GT Zagato and James Bond’s DB5) have used the term. Classic car dealers tend to use the term “tool-room copy.”

Whatever, getting this car started is something of a rigmarole; click the electrics and ignition on, clunk both magneto switches, fuel pump on, press the big black wooden button starter and with a gentle whirr, the fires light and a grey puff of hydrocarbons blows back across the tonneau. 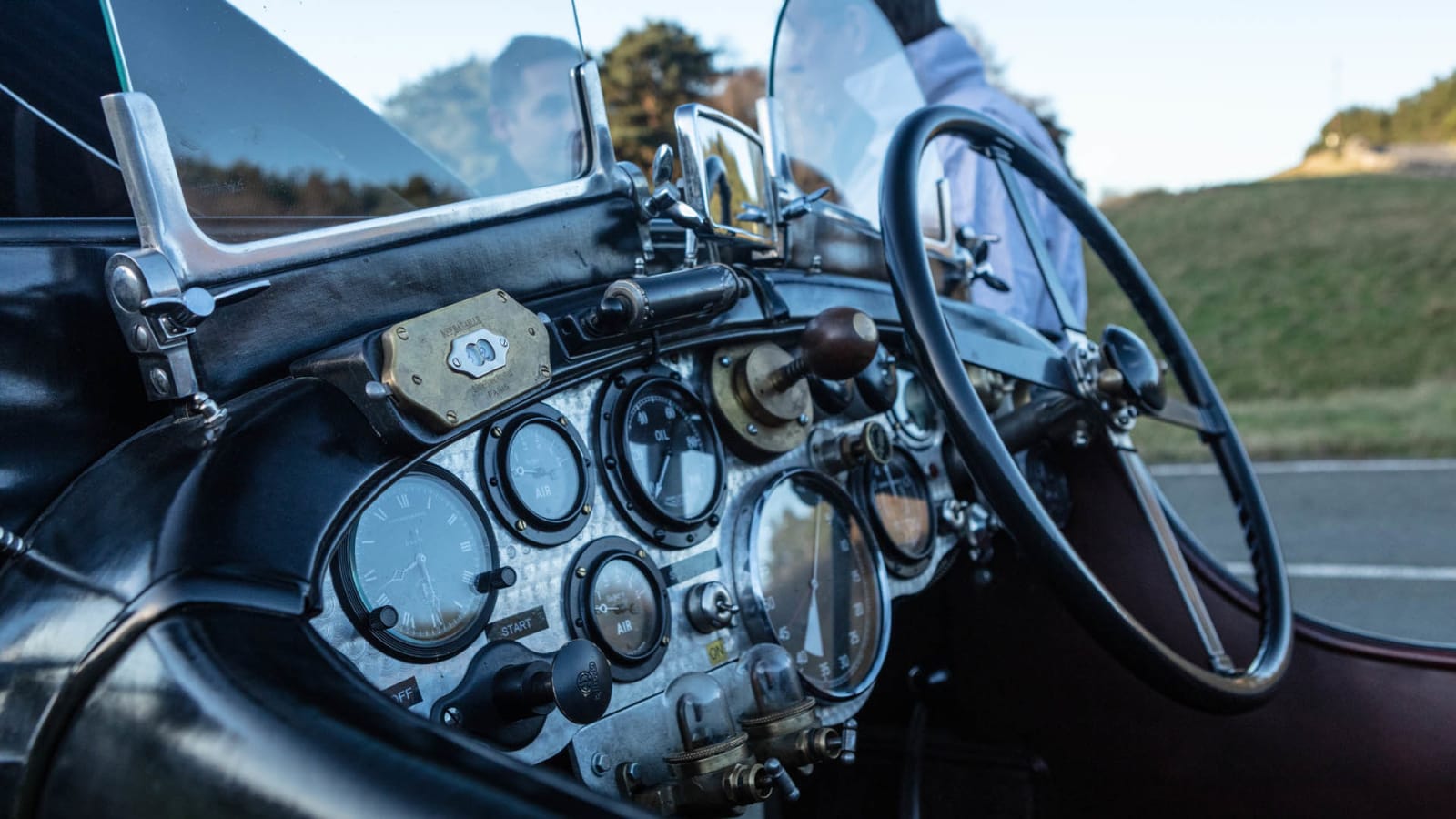 Push down on the heavy clutch, slide the blade-type gear lever into first and feel the gears reluctantly mesh. You need to double declutch up and down the four-speed ‘box to avoid grates of protest. The center-placed throttle isn’t the last word in progression and those with big feet need to blip the throttle with the side of their foot. Unlike the original, which has its boost limited in respect of its age, this car gets the full boost, full-fat 245 horsepower at 3,200 rpm. It leaps away from the standstill, like a draft horse on holiday, with its exhaust bellowing and the supercharger whining. It’s difficult to guess, but I reckon if you were careless of clutch linings, it would probably manage zero-to-60 mph in about 12 seconds.

Driving any vintage Bentley is a work out for the shoulders and upper arms, and a physical trial not like anything you’re likely to meet anywhere else. There’s the vestigial drum brakes

; that center throttle with the clutch on the left and brake on the far right; the high driving position; the 1.8-tonne weight, and finally, the Bentley Type D gearbox, a device supremely untroubled by any sort of synchromesh and blessed with the temper and bite of an aged Jack Russell terrier.

You heave on the flexible steering wheel at low speeds, and quickly learn to get the car moving before trying to turn. Speed up and it gets lighter and has a lovely balance, but there’s still an undeniable impression of a runaway train. Up into third and the Blower really starts to move. It’s not the instant torque we’re becoming used to from battery-electric cars, but a fierce shove in the back nevertheless. In the cold weather of the test day, the 21-inch, narrow Blockley tires take a while to warm up and with a full tank in the back, the old/new Bentley is tail happy. The trouble is when to know the point that tail happy will become spin happy. 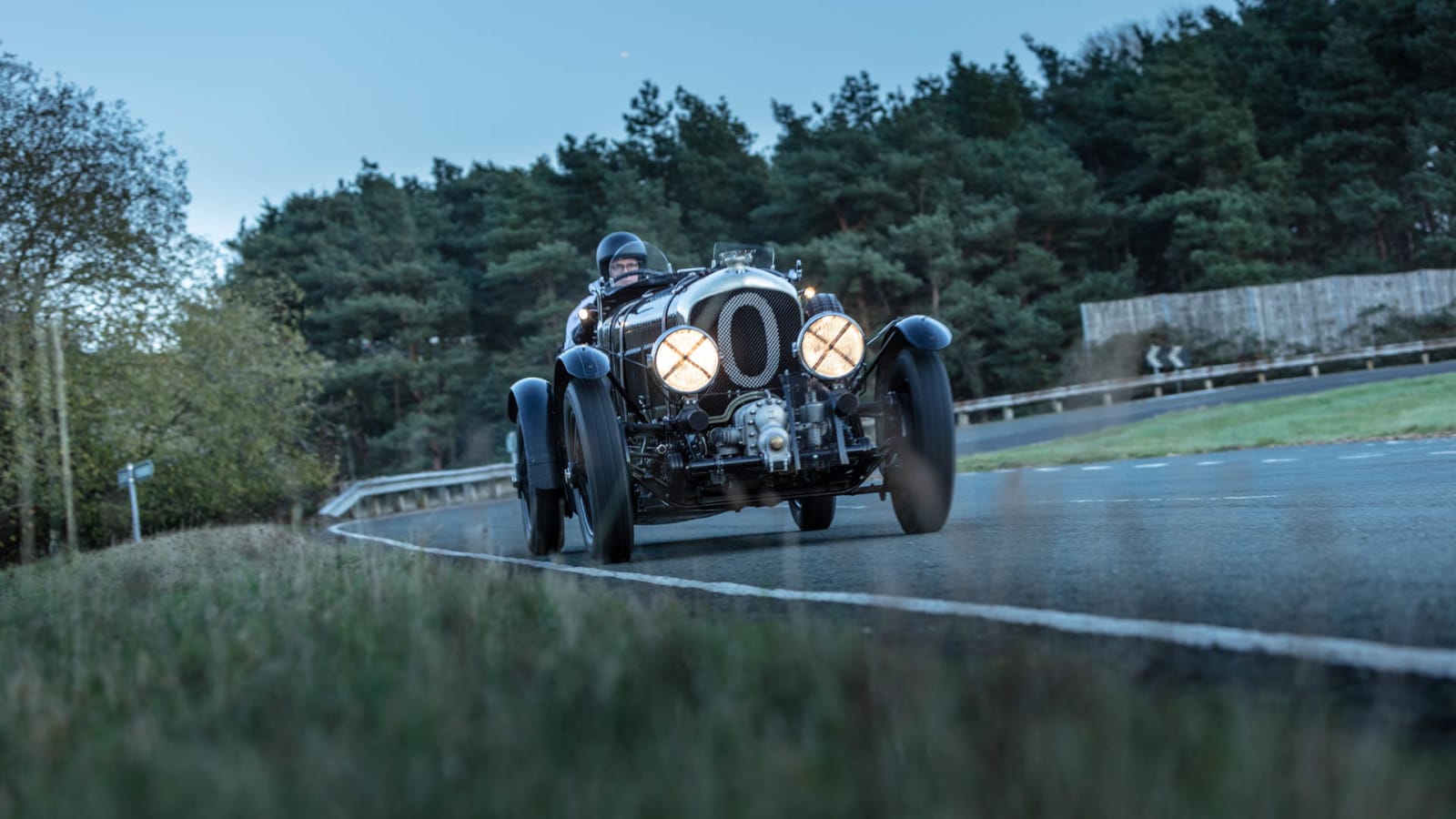 So, who has bought these dozen replicas? Linde says that most of the new owners are well acquainted with vintage cars, but one in particular has only ever owned modern exotica. So, he’ll have to get used to climbing in from the passenger side, having a care the gear lever doesn’t slide up his trouser leg, get oil stains on his fashionable shoes from the leaking dashboard drip indicators, or have his brain frozen lapping at high speed in a sub-zero blast.

“We’re giving him driving lessons,” says Linde with a grin. “We’ve also reprinted the original driver’s handbook and we’re managing expectations from those more used to moderns; these are very high-maintenance vehicles.”

And while this car is superbly engineered, it passes diddly squat in terms of modern crash safety and emissions, which means they will never be allowed out on the public road, which is the very essence of the enjoyment of these remarkable machines. The other thing is that the £1.5 million purchase price would buy you a tired 4 1/2 litre Bentley and a professional restoration/conversion could turn it into a Birkin replica, which you could then drive on the public road. 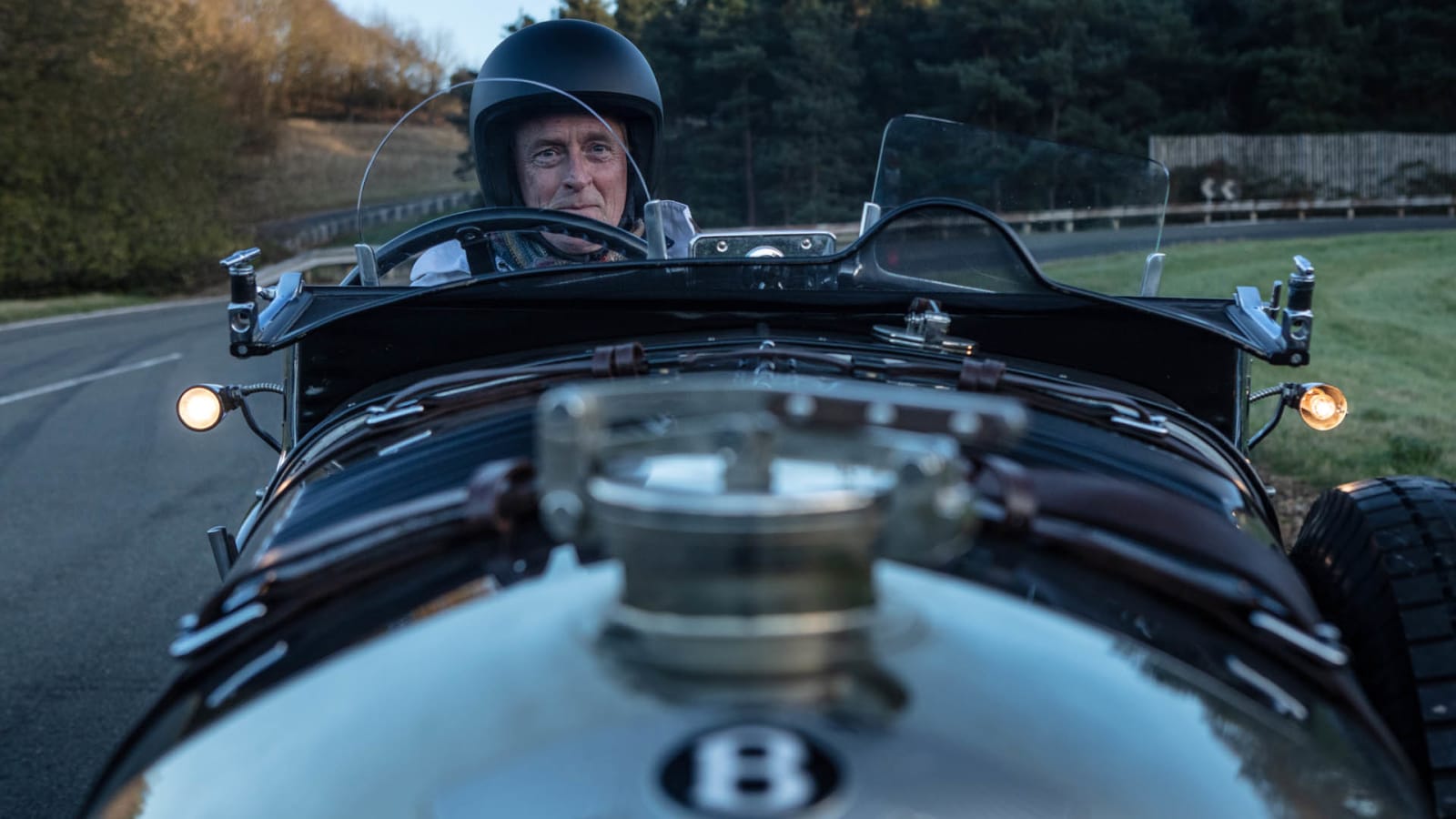 So why on earth spend the equivalent of $1.97 million on a car you can’t drive on the road? Heaven knows, perhaps it’s God’s way of telling you you’ve got too much money. Either way, Bentley will have made money on these cars though not as much as it wanted since the costs were so high. It’s still enough for it to be planning a series of 6 1/2 litre “continuation” cars as well.

Should we be glad Bentley did it? I’m just on the side of yes. It’s a major boost for the specialist industry that serves existing owners (Bentley has been generous in its praise of these marque specialists) and it also shows a dogged spirit and a skill set, especially at Bentley’s Mulliner Division, which did the trim for these cars.

Not everyone agrees though, as one owner said: “it’s a measure of the paucity of current car design at Crewe.”

Bentley needs to tread carefully here. These cars are an amazing tribute to Birkin’s skill and bravery, but they are also something of a pantomime curse; owning one of the world’s most desirable cars, but not being allowed to drive it on the road.

Not sure about you, but I think I’d find that almost too much to bear.